Help in smoothing signal output from a frequency mixer

I have a circuit with a TFM-3MH+frequency mixer. I need to output a low frequency signal of 10-100Hz.

The signals that I'm sending to the input ports from a signal generator are:

When I filter out the high frequency component, the signal that I'm getting is: 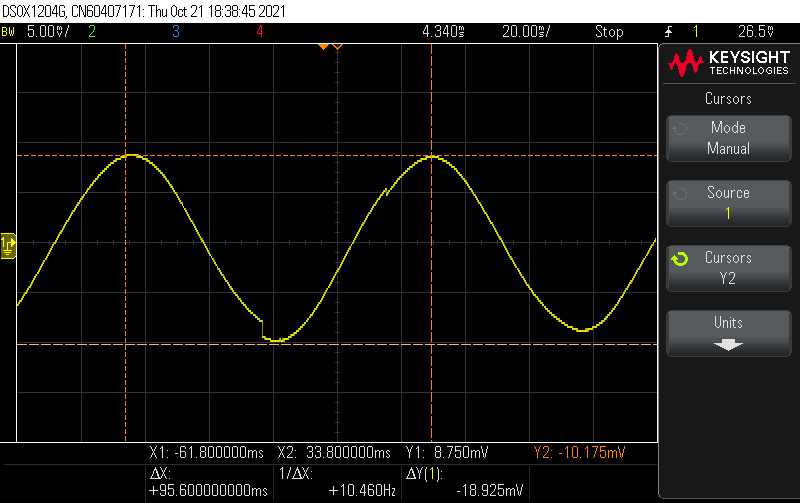 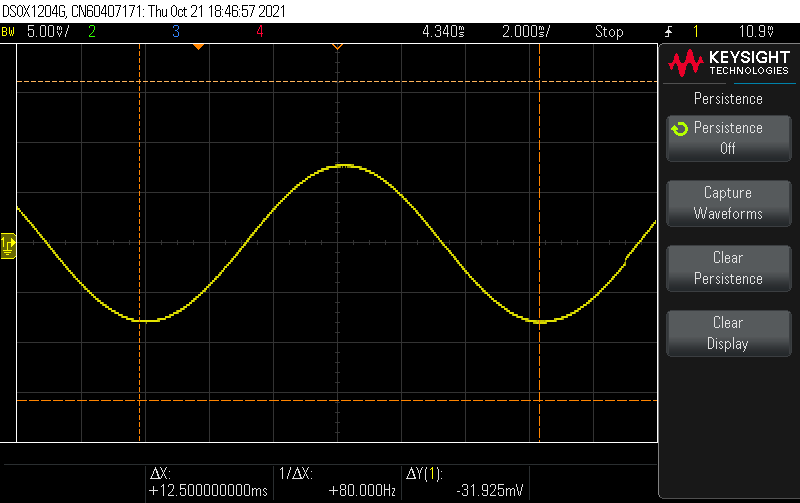 Can anyone explain what can cause these glitches in the signal?

How to avoid them?

Can I add some circuit after the output to smooth the signal?

The spec of the mixer is here:

@Neil_UK They weren't phase locked to a common reference. I synced them and the glitches are gone. Thank you for your help! But I must ask, why is important that the starting phase must be the same? Since the signals are at a different frequency, the phase will constantly change during signal generation

It's not important the starting phases are the same. It is important the phases are consistent throughout the experiment. The clue was in the information that the effect reduced as the frequency separation got larger.

Signal generators are full of non-linearities and unexpected signal sneak-paths, especially the cheaper ones. You don't say what make/model these generators are, so I can only assume the worst. Any signal getting back into the generator has the possibility of mixing in the internal non-linearities of amplifiers, power supply reaction (you name the mechanism, it will be operating at some level) with other internal signals to mix down to low frequencies. Not only that, the mixer will be sending IF and harmonics of the LO back into the generators, and its reflection coefficient will be modulated by the LO, causing more modulated return signal back into the signal signal generator.

The result of all that is that when the two set frequencies are sufficiently close together that the difference frequency is within the bandwidth of the low noise phase locked loop, there's a possibility that the PLL will be modulated with that difference. Now the steps are unexpected in a fully analogue system, but who knows what digital shenanigans are being done in signal generators these days, that could decide to muck about with PLL bandwidths or pre-tunes on detecting that the loop wasn't stable.

As the difference frequency increases, it moves outside the bandwidth of the PLL, stops modulating the reference, and the problem goes away.

When the signal generators are synchronised, the signal paths around the PLL are changed, to positively phase locked to each other.

If you want to experiment some more with the mechanisms, then the first thing to do would be to try again with free-running generators, but fully isolate the two signal generators from each other. Buffer the LO signal with a power amplifier and attenuator to reduce any return signal from the mixer. I'm presuming that with a low output level, the signal signal generator already has a significant attenuator in its output, but put some more amplification and attenuation in there anyway.

I've been involved with building signal generators for much of my professional career. Getting the thing working to produce the required frequency range, resolution, phase noise, power output and harmonic performance takes about 20% of the time. Finding and curing all the signal sneak-paths that cause unexpected mixing and generate unwanted spurious signals takes the remaining 80%.

Not the answer you're looking for? Browse other questions tagged rf mixer or ask your own question.

0
RF Directional Coupler - definitions
1
Understanding Mixer Operation
0
Subtracting One Frequency From Another
2
Are there any drawbacks to this oscillator frequency multiplier circuit?
0
RF Combiner Losses
5
Adding Two Balun Transformers to SA612 Mixer Has No Effect on LO Suppression
0
Clarifications about up and down converting mixers
0
Mixer LO to IF Isolation vs. 1*LO - 0RF Spur