How do I find time constant of an RC circuit with a BJT?

Assuming this circuit below: 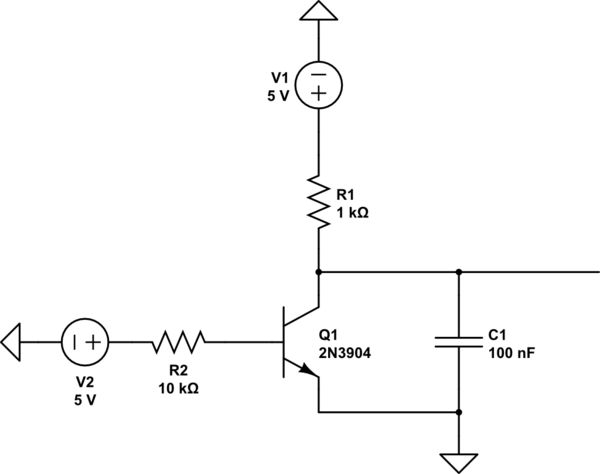 It's not really appropriate to try and apply Thevenin's theorem to this circuit, because:

That said, I can help you understand how this circuit would behave, and how you would determine the time constant in each of the two transistor states, on and off.

The first thing to realise is that R2 only affects the rate of charge of C1 indirectly. It controls the base current of Q1, but it is really Q1 that decides how much current flows from its collector to emitter. So R2 will certainly have some influence, but it's more complicated than simply multiplying by C1 to get some time constant.

Let's begin with a couple of really simple "equivalent" circuits, that represent the transistor as a switch, either fully conductive with 0Ω resistance from collector to emitter, or fully off, with infinite resistance between collector and emitter. It's an over-simplification, but it does illustrate the asymmetry of the circuit that makes Thevenin's theorem difficult (or impossible) to apply here: 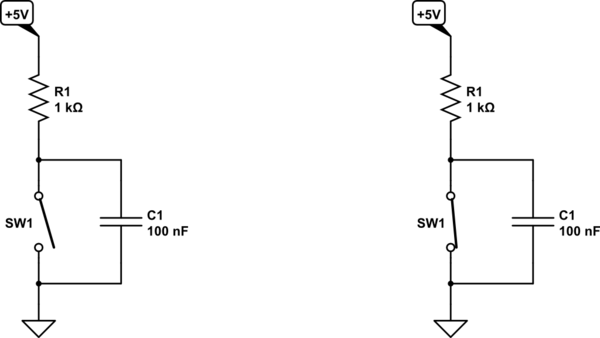 On the left you have SW1 open, meaning that the only two components here which are passing any current are R1 and C1. Assuming C1 starts completely discharged, it will charge up to 5V, and the time constant of that charging curve will be \$R1\cdot C1\$.

On the right, the switch is closed. This means that the capacitor will discharge immediately. That is, if we assume the switch has no resistance, the time constant will be \$0\Omega\cdot C1 = 0s\$.

Obviously this is impossible, and no switch, even a fully "on" transistor, has zero Ohms resistance. We will need a better model of this state of affairs than a simple switch, one that accounts for the transistor's behaviour when it's on.

So, back to your original circuit, with some extra detail: 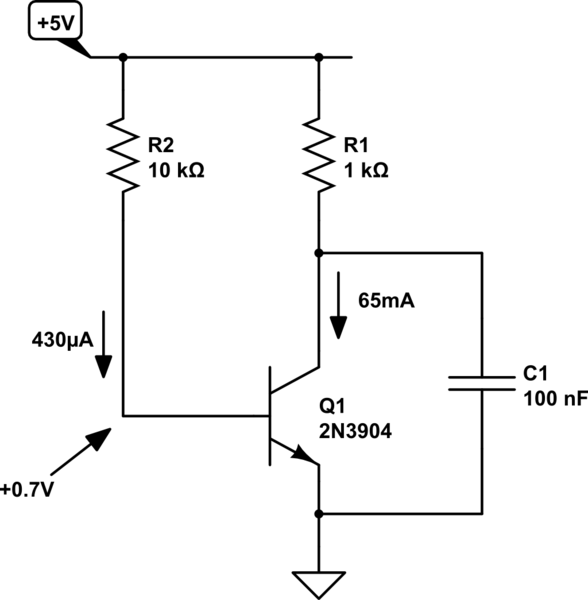 The resistor R2, is providing current into Q1's base. The base will have a potential of 0.7V above the emitter, which is at 0V, so we can say that the base potential is 0.7V.

Therefore the voltage across resistor R2 is:

Base current \$I_B\$ will be the current through R2, which we can calculate with Ohm's law:

Now we need to know what the current gain of the transistor is, because that will determine (together with base current) what current will flow from collector to emitter.

A typical value of current gain \$\beta\$ for the 2N3904 is about \$\beta = 150\$, but this can vary a lot from device to device. I'll use it here because it's the approximate value that CircuitLab's model for this transistor seems to use.

By this model, collector current will be constant at 65mA. The model is naive, but it's good enough for a rough estimate of the time it will take the capacitor to discharge. Some of that current comes via R1, but it's a small percentage, and I have to neglect it because the maths would be a nightmare otherwise.

Because the capacitor is discharging with a constant current, the charge curve is a straight line, not an exponential curve you expect from a resistor-capacitor combination. We must use a different formula to find the time it will take for the capacitor's voltage to change from 5V to 0V given a constant current through it of 65mA.

Formally, the relationship is

but since the current is constant, we can skip the calculus, and it simplifies to:

I hope you didn't get too confused there! If you take away anything from all this, it should be:

You have a transistor with about 430uA flowing into the base. The transistor will act more-or-less like a constant current sink until the voltage across the transistor drops below 200mV or so. The current is hFE dependent, but somewhere around 100mA with a large possible variation.

The resistor R1 fights that current sink, but only affects it by 5% or so until the very end, so we can pretty much ignore that except right at the end of the discharge it will determine the final voltage seen at the collector.

If the capacitor was originally charged to 5V, it will discharge to < 300mV in less than 10us typically (half that given the above rough estimate of Ic).

The resistance in the RC circuit is pull-up resistor R1.

If it's a switching circuit, where Q1 is saturated or off, then R2 has no effect on the RC timing constant. R2 passes current through Q1 base to Q1 emitter.

However, bear in mind that the RC circuit will not be discharged to 0 V by Q1 but to the Vce(sat) of Q1. This Vce(sat) is typically 0.2..0.3 V but check the datasheet and take the worst-case min or max voltage for your application. If the RC timing not being too short is most important for your function, calculate R and C based on the Vce(sat) max value, otherwise use the min value.

0
How to treat the DC in calculate the time constant in RCL circuit having DC voltage source?
0
How to find the Thevenin resistance?
2
How to calculate time constant for RC circuit with more than one resistor
3
BJT Voltage Divider Bias Circuit Theoretical/Ideal Model Help ..LTSPICE?
1
How to find the thevenin equivalent in this circuit?
1
Issue with Constant Current Sink
0
Time Constant of a Complex RC Circuit
1
Finding Norton voltage and resistance and max power
3
Time constant of this circuit