Explanation of blinking circuit with transistors

I've been staring at it for days and I still don't get how this is supposed to work. Capacitors aren't even connected to the negative rail, so how will they ever charge? 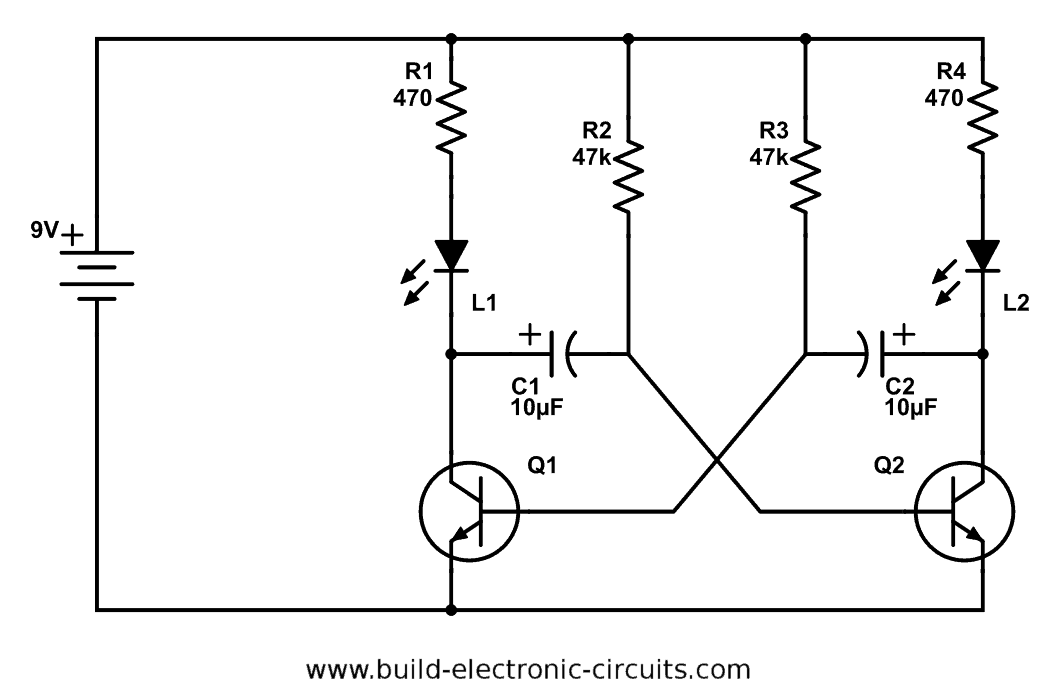 It may be just slightly easier to see it drawn this way: 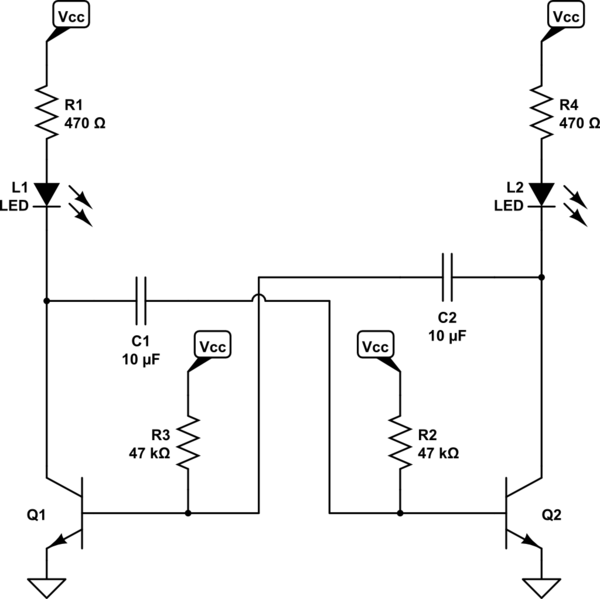 (I've left things to use \$V_{\!_\text{CC}}\$ rather than \$9\:\text{V}\$ to keep it more abstract for now, despite the specific resistor and capacitor values still present. I've kept all your part name-designations, though.)

If you limit yourself to a static viewpoint, and if you assume that the BJTs have \$\beta \gt 100\$ and the LEDs each drop about \$2-3\:\text{V}\$ , then you'll find that both LEDs should be ON and that there should not be any oscillation.

Assuming saturation for the BJTs for a moment, we'd guess that:

That idea applies to both sides. So the circuit should be as I earlier wrote, that both LEDs should be ON and that there should not be any oscillation.

There are a few reasons why this isn't true:

Finally, there will be a start-up transition period followed by two complementary (similar for each BJT, but not exactly similar) periods that form, together, the astable multivibrator behavior that is claimed for the circuit. To apprehend the circuit, you cannot mentally skim over the start-up transition period. So I'll focus on that in a moment.

Regardless, this is why I argue that you must be able to mentally hold dynamics in your mind while considering the circuit if you are to understand it. And this is where mental exercise helps a lot. The ability to do this does get much better with continual practice. (And it requires continual re-inforcement to remain proficient, as it may lapse a little with disuse.)

No parts are identical. Get that right.

And the capacitors are initially discharged.

(This isn't strictly true if you have a switch and turn the circuit on and off, repeatedly. You would need to wait for a little time after turning it off, before re-starting it if this assumption is to be strictly true.)

Depending on how fine-grained you want to be (in time), you could consider the very first atto-second, well before much can happen. The charges won't even have had time yet to re-arrange themselves. (Speed of light and all that.) If I discuss that process here, given past experience here I'm sure I'd need to defend what I write about the physics (which isn't electronics), so I'll just avoid those details I see and move on. It won't really help, anyway. Suffice it that there will be a very short period during which electron charges will very, very quickly place themselves on the surfaces of conductors and throughout the bulk semiconductor regions when you power this up and we can just assume all that has already happened and start from that point in time.

Once the physical re-arrangement of surface charges has happened, the first useful nano-second to examine will have the base of both BJTs pulled up to somewhere near \$900\:\text{mV}\$ and about \$170\:\mu\text{A}\$ in \$R_2\$ and \$R_3\$. This also means the collectors will be at the same voltage (almost, as the parts are different keep in mind) as their base voltages. The capacitors don't directly connect between the collector and the base of the same BJT. They cross-connect. So the collectors and bases won't be exactly the same. But likely very close. So they will be in active mode, at this first moment with their fuller \$\beta\$ value in play. This means both LEDs will (ignoring their capacitance as I'm assuming we have moved past that small detail) be ON.

So, expect a small flicker of sorts when this is first powered where both LEDs are very momentarily turned on.

However, one or another of the BJTs will be more ON and the other one slightly less so. The one that is more ON will be pulling harder on its collector and this fact will, because the capacitors at this moment still have \$0\:\text{V}\$ across them, hold the opposite BJT's base just that much closer to ground.

It doesn't have to be very much, because the collector current of an active-mode BJT goes by a factor of 10 for every \$60\:\text{mV}\$ difference across its base-emitter junction. So the BJT experiencing either a higher \$\beta\$ value and/or a lower base resistor value will win out over the opposing BJT.

In doing so, the opposing BJT will release its collector. (It does this very quickly because of the factor of 10 rule.) In releasing it, this allows the opposing BJT's LED and resistor to pull upward on the end of the capacitor that is already connected to the winning BJT's base, meaning still more base current supplied to the winning BJT and therefore an even better ability to crank the losing BJT's base down harder towards ground.

So. One of the two BJTs will rapidly win this battle and the starting condition will be that one of the BJTs will be ON and the other one *OFF. This whole process is pretty quickly decided.

The winning BJT's collector capacitor will have, by this time, been partially charged via the collector resistor and LED on one end and the opposing BJT's base resistor on the other end. But the capacitor polarity will be slightly more positive on the collector end than the base end because the collector resistor is so much smaller in value. So when the winning BJT wins more fully and hauls down still harder on its collector, this will also drive the losing BJT's base into negative voltage territory. It's hard to say by exactly how much. But somewhat. This clinches the fact that the losing BJT is fully OFF.

Now, keep in mind that we've only gone to the point of deciding that one BJT will win and the other will lose. However, this starting condition still has both capacitors as discharged. This is not a normal circumstance once the circuit goes into bistable oscillation. So we are still not yet out of the starting conditions and what we see here will never again occur. Not ever. This is a one-off. Keep that in mind.

The conclusion is that this very first, unique starting cycle will have both LEDs ON for a few milli-seconds, followed by just one of them ON for a period that is a third or less of an RC time constant (say \$100\:\text{ms}\$ in this case.)

By this time, you should be able to work out more of the details of the bi-stable operation. Most of the hard work goes into understanding why it starts in the first place. The above, hopefully, adds a little light to that area.

(You should be able to work out the fact that once this circuit is up and running, it is driving the base voltages of each BJT well into negative voltage territory. With \$9\:\text{V}\$ as a source, perhaps down towards \$-7\:\text{V}\$ or so. This is likely to cause most BJTs to avalanche their base-emitter junctions. So these BJTs may work later as astable multivibrators for a while. But they won't be as good as before for analog work. Also, Spice will simulate the circuit as having some particular cycle time that does not take into account the avalanche behavior. In practice, the blinking period will be shorter than predicted because of it. Just FYI.)

Capacitors aren't even connected to negative rail, how will they ever charge?

The rest of the operation you can read about in many online tutorials.

That circuit is a transistor astable multivibrator.

Start with Q2 having just been switched on with its base at 0.7V and its collector at 0V. Q1’s base will be at -8.3V and will be slowly rising as C2 charges through R3. Simultaneously the collector of Q1 will be rising as C1 charges via R1. The collector of Q1 will reach 9V before its base reaches 0.7V because C1 is charging through a resistance of 470R (R1) whereas C2 is charging through 47k (R3). A little while after the collector of Q1 reaches 9V, its base will reach 0.7V switching Q1 on and forcing its collector to 0V. Voltages across capacitors with a series resistance can’t change instantly and so as the left hand side of C1 drops to 0V, its right hand side must also drop by 9V taking the base of Q2 almost instantly down to -8.3V, switching Q2 off and enabling its collector to rise fairly quickly to 9V as C2 charges via R4. A little while later the base of Q2 reaches 0.7V because C1 has been charging via R2. Q2 switches on and its collector drops almost instantly to 0V taking the base of Q1 down to -8.3V. We are back where we started and the above described sequence repeats.

There is a design flaw in that circuit. The bases of the transistors are taken down to -8.3V and the typical maximum data sheet specified VBE for a small signal transistor is only -6V! There are a couple of ways around this, lower the supply voltage or add schottky diodes (low forward voltage drop) in series with the transistors’ bases.

This circuit is called an astable multivibrator.

A more detailed breakdown of this circuit is here: https://www.electronics-tutorials.ws/waveforms/astable.html

Or, rather than diving down that rabbit hole, try a simulation and see the behavior for yourself, here. 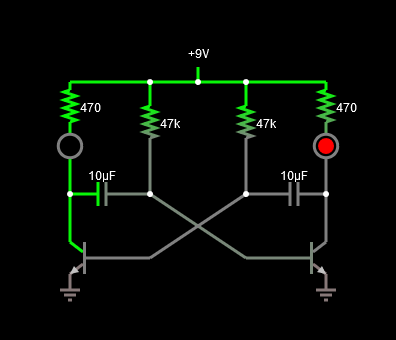 A related circuit, the bistable multivibrator, is just this circuit with resistors instead of capacitors providing the feedback. It toggles only when triggered by an external signal.

That circuit has no input.

Oscillations are started by the electronic noise of the components, that are very small voltage or current sources that excite the circuit.

9
The 'gap' between understanding of transistors and their application in real circuits
0
Alternative LEDs Blinking circuit(Analog) Help
3
How to analyze analog circuits with transistors [is this circuit immediately analyzable to anyone]?
3
Why do people state their circuit uses <insert> transistors?
0
Battery Recharge Circuit Help
1
push-pull explanation
0
Design a tuned BJT common emitter amplifier with some specifications