Is it valid to use transistors to route signals through the circuit?

I'm working on an ECG/EMG circuit and instead of duplicating the input, I've used transistors to route the signal to a specific in-amp depending on the user's selection. This is what I came up with: 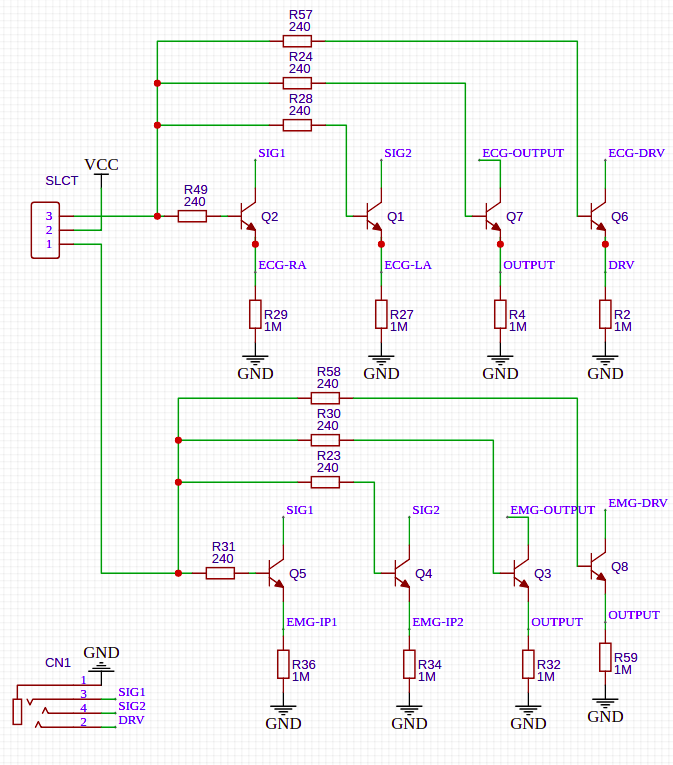 It works in simulation, but I'm not sure if it's going to work in real or not. The idea is pretty simple. The user pulls one of the SLCT pins high and that pin activates a certain set of transistors and these transistors route the signal to in in-smp of a certain device (ECG or EMG). SIG1, SIG2 are connected to the electrodes.

The base resistor (according to my weak knowledge) doesn't matter in this application since I don't care about the amplification or the collector current. I just want the whole signal to go through. The 1M ohm resistor is to prevent the signal from going to ground.

Am I doing it right, or there is something I messed up? Put in mind that the vital signals are too weak and noisy.

I believe you are assuming that a BJT, when switched on, is like a very low resistance between collector and emitter, but this is not the case. BJTs are ill suited to the task of forming switchable high/low impedance paths from input to output, because their base-emitter junction is effectively a diode, which ties the base and emitter potentials to within 0.7V of each other.

Therefore, in the configuration you have drawn, the emitter always "follows" the base signal, not the collector. in fact, it's called an emitter follower" for that reason, which you can read about in the Wikipedia article.

What you require is either some kind of MOSFET design, or better, an analogue switch, which does the job for you.

Even MOSFETs will require carefully crafted potentials. Even though they are more like the switchable impedance drain-to-source path you require, MOSFETS have a parastic body diode, which makes that simplified model of their behaviour only true for certain gate potentials. Also, for a MOSFET to be "on", it relies on the gate potential being very different from the potential of the signal being switched, which is not trivial to achieve.

For these reasons analogue switch ICs typically do not use BJTs as signal path switches. They make use of two or more MOSFETs to get the job done, and they have all the additional circuitry necessary to ensure that gate potentials are appropriate for any given signal potential.

Analogue switches, when "on" provide signals paths of just a few Ohms, or milliohms in some cases, and that path is fairly independent of the switching circuitry. However, due to the gate potential constraints I mentioned, they all require that the analogue signal potential stay between the power supply potentials. Analogue switch ICs usually have three power supply pins, ground, positive and negative. The signal being switched cannot ever exceed either the positive or negative supply voltages.

Another cause for concern is amplitude of the analogue signals themselves. If they require amplification, then that should be done as early as possible. Every stage they traverse in some system (even an analogue switch) is adding noise to the signal. By amplifying at a late stage, each prior stage is adding small amounts of noise to a small signal. By amplifying first, each subsequent stage is adding a small amount of noise to a large signal. Obviously, in the latter case signal-to-noise ratio is much better.

Lastly, don't rule out relays. They provide complete isolation of analogue signal from the switching system, and don't suffer the amplitude restrictions imposed by analogue switches.

So, I have two recommendations:

Can I use transistors to route/switch ECG signals?

ECG signals are in the +/-0.5-1mV range, so too low for any transistor type circuit. The schematic you show will not work under any circumstances since you are unable to provide base current to actually switch on the transistors.

I'd suggest that the best possible solution is to use Mercury wetted reed relays. These provide excellent isolation and very low contact resistance. Here is one potential relay the COTO 7000 HG Notice here that this is the lowest possible contact resistance you can get, and more than able to handle the the extremely low signal levels your require:

Not the answer you're looking for? Browse other questions tagged transistors biopotential or ask your own question.

0
Circuit for amplification and protection against input inductive spikes
2
Any tips on designing an audio preamplifier for low frequencies?
0
Lower current through different transistors
1
Use transistors for controlling two LEDs
0
Is the 'return' path / switch needed?
10
For this Art of Electronics circuit, why aren't the transistors specified? And what transistors do I use?