Why are NMT masters acting as SDO clients and not SDO masters in CANopen?

What is the SDO service?

The SDO service allows a CANopen node to read/edit values of another node's object dictionary over the CAN network.

As mentioned under 'communication models', the CANopen SDO services utilize a "client/server" behavior.

Specifically, an SDO "client" initiates the communication with one dedicated SDO "server".

The purpose can be to update an OD entry (called an "SDO download") or read an entry ("SDO upload").

In simple master/slave networks, the node with NMT master functionality acts as the client for all NMT slave nodes reading or writing to their ODs. 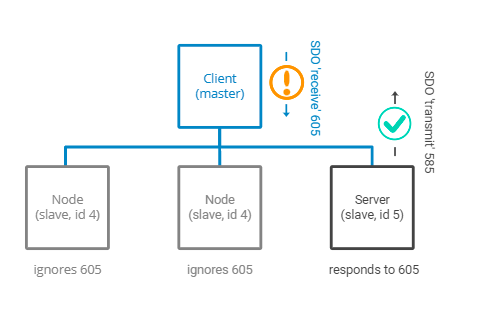 Why are NMT masters acting as SDO clients and not SDO masters in CANopen?

There is no master/slave in CANopen apart from the NMT protocol. The NMT master is responsible for sending out NMT status changes and is usually also the network supervisor node (heartbeat consumer etc). Notably, SDO transmission can happen in any NMT state, though it's generally recommended to do them in pre-operational mode only. Other than that, there's no relation between NMT and SDO.

As the text say, the SDO communication is to be regarded as point-to-point and no master or other 3rd party needs to be involved. All compliant CANopen nodes must have at least one Tx/Rx SDO.

There is nothing called "SDO master". The terms "client/server" aren't helpful: there's a sender and there's a receiver, and that's it.

I have no idea why your linked tutorial dragged NMT into the explanation of SDO, I can't make any sense of the text. I get the impression that they are speaking of some specific implementation (their own) and not the general case. It is perhaps not the best tutorial.

In most cases there is only one SDO channel defined in the system which is then often named "SDO Master". But the CANopen standard allows more than one SDO RX/TX channel in the same network so there can be two or more nodes communicating with others via SDO messages. Thenn the word "SDO Master" is misleading and can not be used. The SDO channels are defined in the Communication Segments object ID 0x1200.

That beeing said, it should be more clear that the NMT Master has nothing to do with a so called "SDO Master".

There is also the possibility of a Multi Master Network where no dedicated NMT master is needed on startup.

Not the answer you're looking for? Browse other questions tagged can canopen or ask your own question.

40
Why does the CAN bus use a 120 ohm resistor as the terminating resistor and not any other value?
4
Why are my microcontroller and CAN transceiver failing?
1
How to determine the length of the last data field in a SDO block transfer?
0
When should I use normal SDO transfer in CANopen?
2
Process Data Objects - CANopen - How do they work?