I'm designing an audio signal frontend to take an electric guitar analog output and deliver it to an ADC channel on a microcontroller. The µC/ADC are 3.3V devices (although there is a 5V regulated voltage source available on its carrier board). The purpose of this frontend is to take the AC waveform coming out of the guitar, which has a P-P voltage dynamic range between a few dozen mV and up to 1V, offset the signal by 1.65V (half the ADC range), amplify it up to the ADC's rails, and apply an antialiasing lowpass filter beyond 20kHz.

I would prefer to use a low voltage, single supply, rail-to-rail amplifier that can directly run off the MCU's 3.3V supply without me having to mess around with additional voltage clamp circuitry or even a dual supply which would require a charge pump. I want to use only components that I have on hand and not buy anything extra. The only single-supply 3.3V amp that I have is the LT6200-10 (product page; datasheet). I have 2x units of this IC, enough to create one preamp and one active filter.

Before printing and assembling the PCB by hand, which always runs the risk of damaging components, I wanted to simulate the preamp portion to make reasonably sure that it will do what I want. Since the heart is an LT part, I begrudgingly used the awful LT-SPICE simulator to capture the schematic and run a transient simulation. Here are the results. 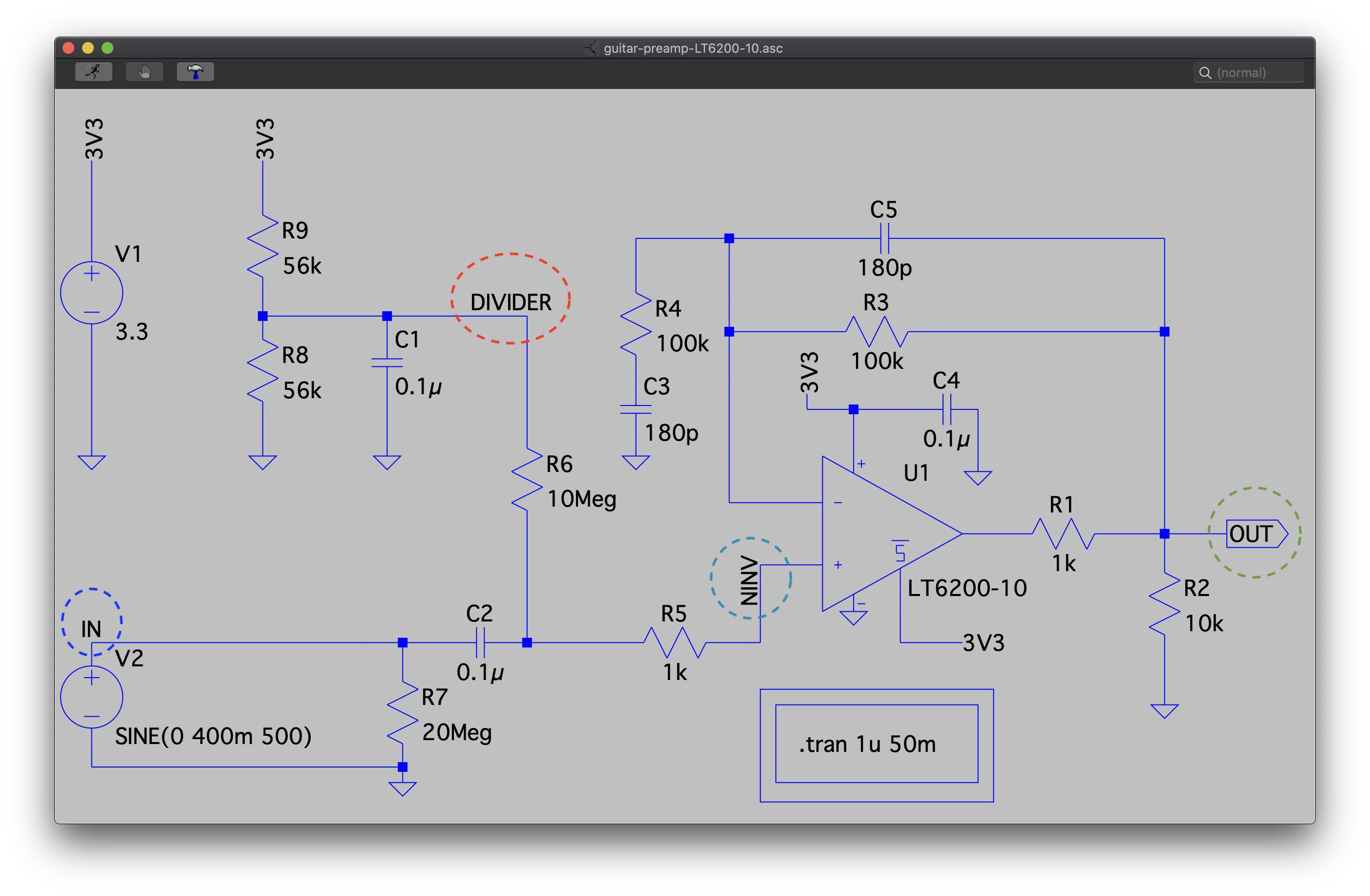 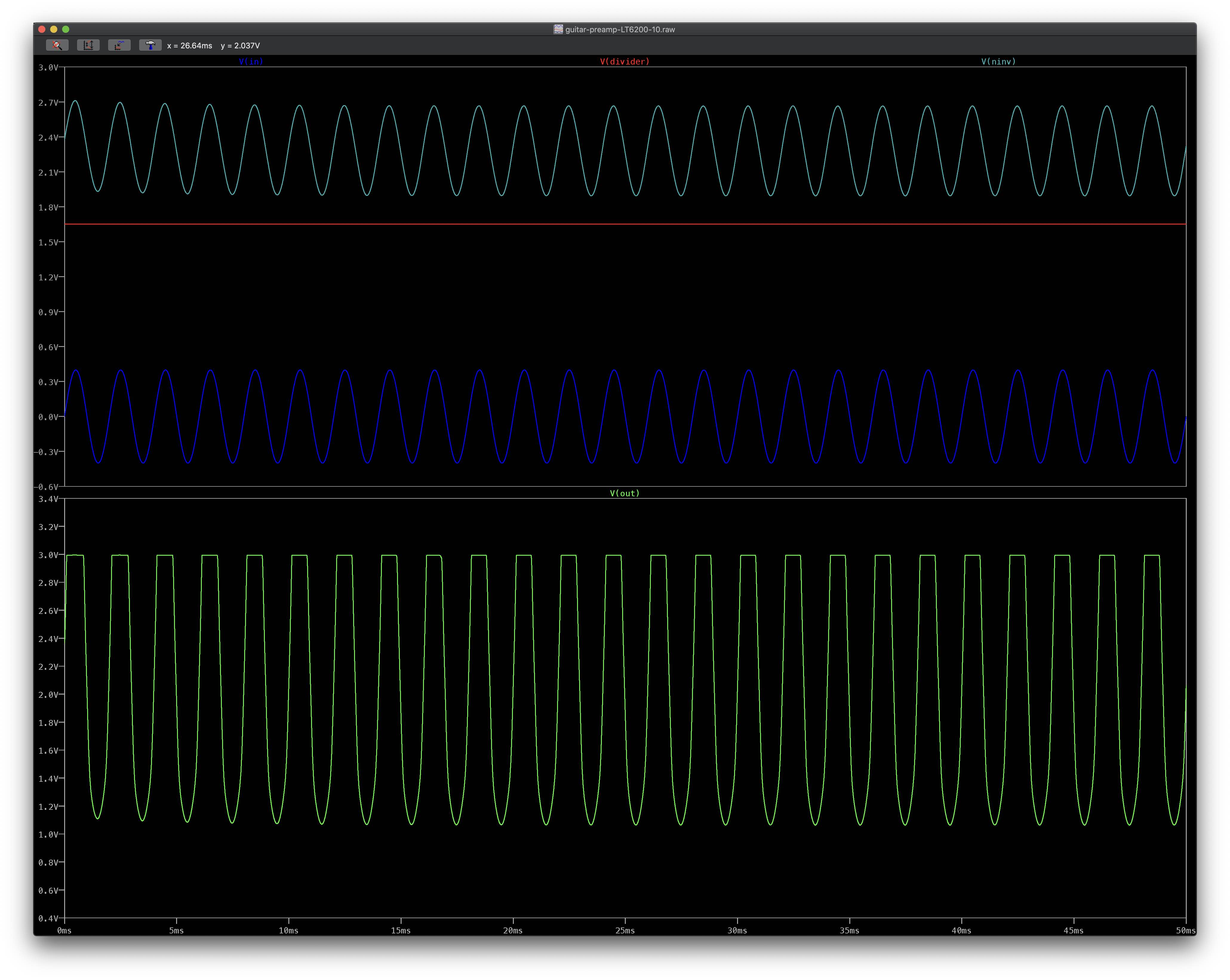 At first I suspected that the -10 variant of the LT6200, which, according to the datasheet, appears to be intended for gains of >10, may not be compensated for the low gain of this circuit. So, as a test, I replaced the LT6200-10 with the regular LT6200 and re-ran the simulation. However, I observed an identical graph. 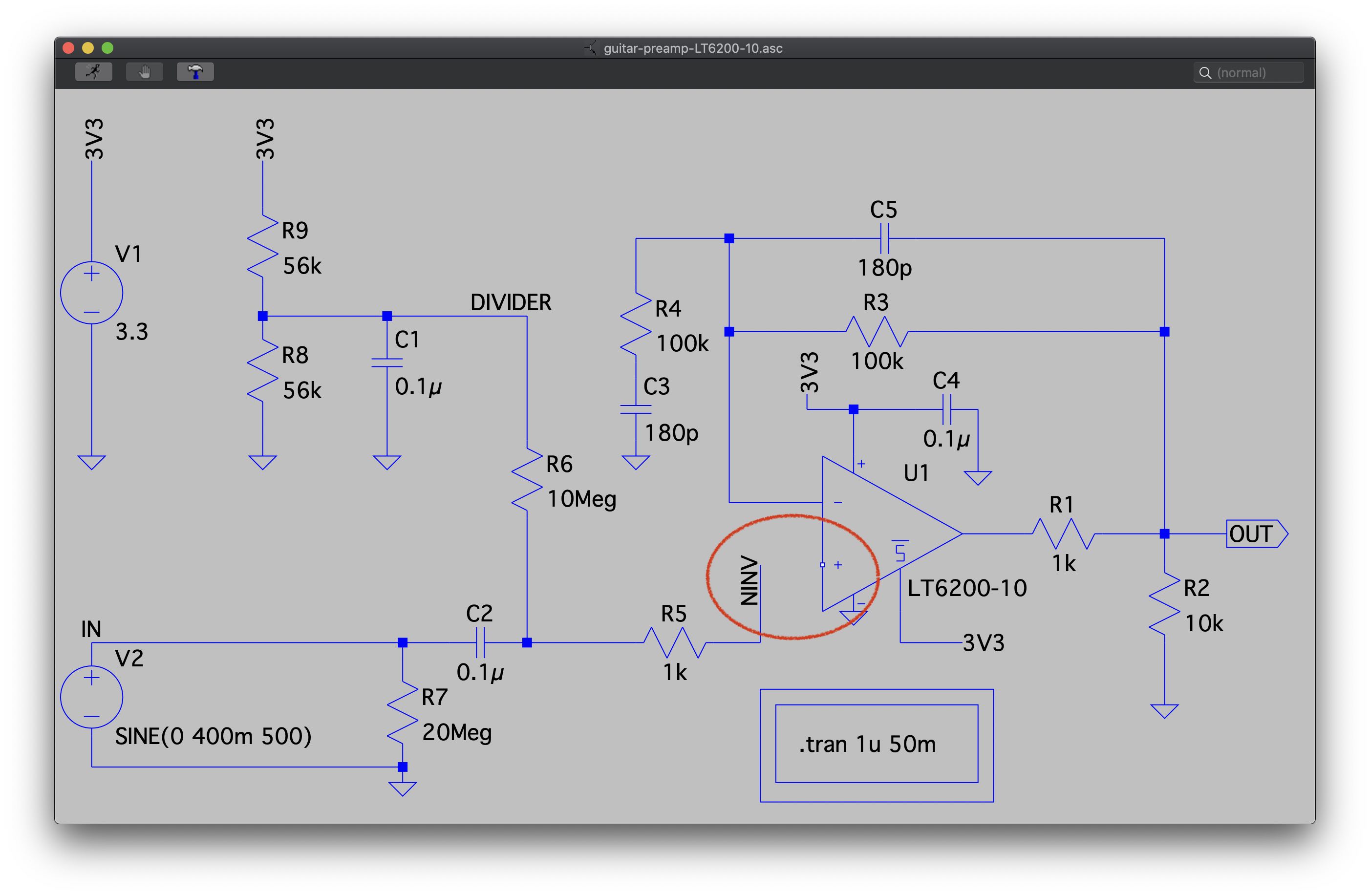 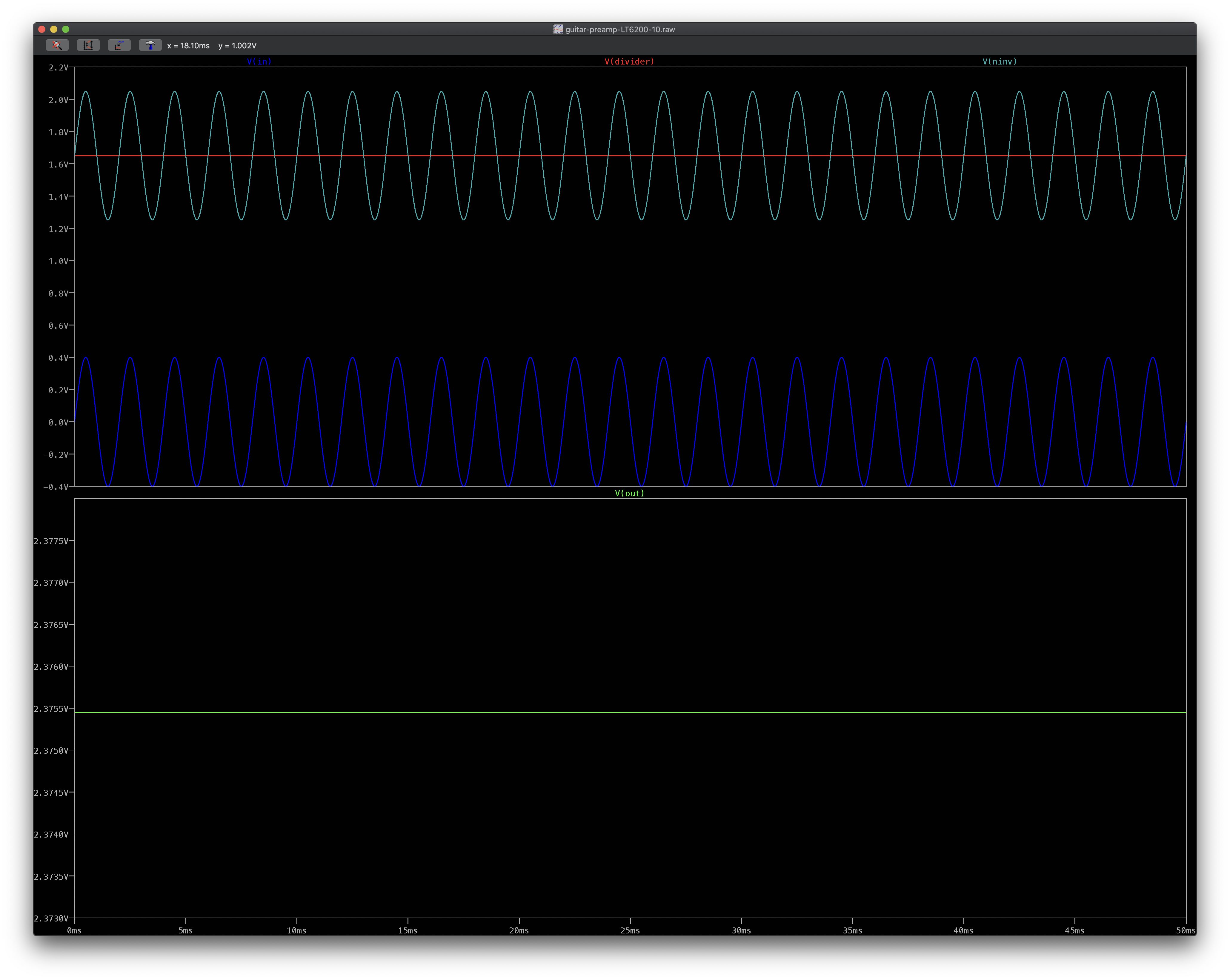 So it seems that the input to the amp – which is, presumably, at a very high impedance – nevertheless dramatically alters the incoming signal. My analog knowledge is pretty weak so I can't understand why this is happening. I know that an ideal amp will always attempt to keep the inverting and noninverting inputs at the same voltage, so this is a hint to me on what's going on, but I'm stuck in trying to do further circuit analysis. I've fiddled a bunch with various orders of magnitude for all of the surrounding passives but nothing seems to cause a trend towards my intended behavior.

What am I missing? Is my topology wrong, or maybe one of the component values? I'm equally interested in filling the gaps in my theory knowledge as I am in a practical solution to this problem so that I can actually build the circuit.

Your big problem, I am pretty sure, is input bias current, the main reason for your output offset. When you disconnected the opamp's non-inverting input, the potential you found at the bottom of R6, and the right end of R5 was \$\frac{3.3V}{2}\$ because there is no longer any current being drawn via those resistors. The voltage across them became 0V, and the potential at those points would be the same as the potential at the junction of the divider R8 & R9.

According to page 4 of the datasheet you linked to, input bias current (when the opamp's inputs are both at \$\frac{V_{CC}}{2}\$, which would be the case if your circuit was working properly) is typically 10μA. This is DC quiescent current, which has to come via R5 and R6. 10μA through \$R_6 = 10M\Omega\$ would develop:

Obviously that's not possible, so what is happening is the system is settling at some quiescent level where input bias current is still significant, enough to drop a volt or so across R6. However, this does illustrate why \$R_6 = 10M\Omega\$ is problematic for this particular opamp.

Whatever biasing system you employ, it will have to source about 10μA, and this might be impossible with a simple resistor divider, while maintaining a high input impedance. Imagine a single resistor R from \$V_{CC}\$ to the opamp's input. It shall source 10μA to the input, and drop \$\frac{V_{CC}}{2}=1.65V\$:

That's the upper limit of any resistance that can participate in a biasing divider for this opamp's input.

I have one suggestion to overcome this problem, which doesn't involve another opamp, and that is to use an emitter follower to buffer the input signal, and bias it at the same time: 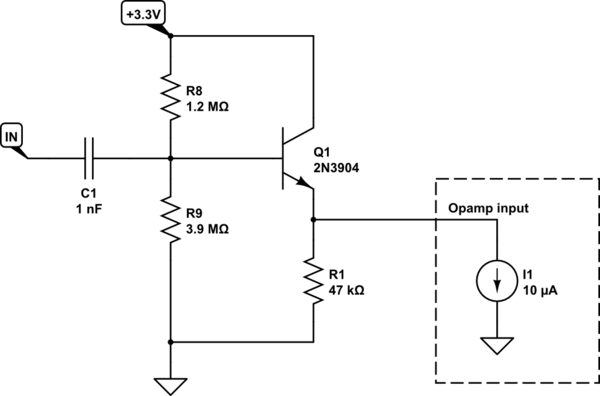 The same problem exists at the opamp's inverting input. That input will also require 10μA, which must be sourced by the opamp's output via the feeback resistor R3. I fear that 100kΩ is way too large, developing \$10\mu A \times 100k\Omega = 1V\$ additional offset. R3 should be something that would pass a milliamp or so at full swing, a current that dwarfs input bias current. Something of the order:

I notice that R1 and R2 drop the opamp's output potential towards ground by 10% or so. This may not seem like a problem, because opamp negative feedback will cause the output to rise accordingly in compensation, but a side effect of this is that the opamp's quiescent output level is now above the power-supply mid point, and will contribute to asymmetrical clipping.

I don't know what R1 and R2 actually do, so unless you need them for some reason I am not aware of, you should get rid of them. Let the output operating point sit half way between the power supply potentials.

I just noticed that the opamp inputs may actually source 10μA of bias current (the figure in the datasheet is -10μA), which invalidates the circuit above.

In that case, you can switch the biasing resistors, and use a PNP instead: 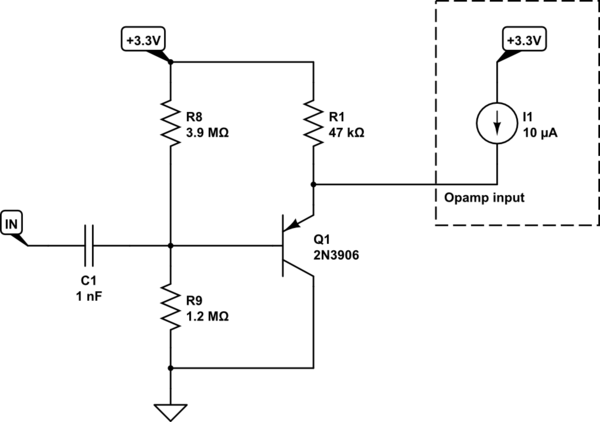 Each considered op amp will tend to have strong points in its various parameter specifications but each op amp will also have its weak points. It is not possible to have an op amp that is a strong performer in all aspects of its capabilities and so when selecting an op amp for a particular application it is a trade off and the final chosen device would be chosen based upon which of its parameters are required to be high performance.

Your chosen op amp is a strong performer on GBW (bandwidth capabilities) but is a weak performer on input bias current. Your audio application requires a fairly small bandwidth but needs to be a strong performer on input bias current which is required to be a low value so as to cause low output offset when it flows through the resistances connected to the op amp's inputs. Therefore I would suggest that you have made a poor choice of op amp in the LT6200 for your application.

You could have a look at the LMC6482AIN which has rail to rail input and output, will work down to a supply voltage of 3V and, importantly, has low input bias currents. It is a fairly common op amp.

To keep the bias voltage steady, increase the value of C1 to say 22uF which will largely reduce the output resistance of the potential divider whilst providing good supply rail filtering.

C3 provides a dc block and low frequency roll-off, the -3dB lower cut-off frequency being = 1/(2 * pi * R4 * C3) and so C3's current value is way to low as it is reducing the amplitude of signals below about 9kHz and needs to reduce signals below 20Hz.

C5 reduces the amplitude of high frequencies and so can improve stability as well as reducing high frequency noise. The -3dB upper cut-off frequency caused by C5 is in the region of the frequency given by 1/(2 * pi * R3 * C5) and so C5's current value is too high as it is reducing the amplitude of signals above about 9kHz, a figure that needs to be increased to say 50kHz. Note this equation is just an approximate equation for the -3dB frequency.

Another issue, mentioned by finbarr, is that the current flowing in R2 is causing a voltage drop across R1 causing the op amp's actual output to go more positive than if you removed R1 and R2 which I would suggest you do to bring the op amp's output down a little which will reduce the likely hood of positive clipping.

Your simulation doesn't actually make sense to me. At 500Hz and the low frequency roll-off, caused by the low value of C3, I would expect your amplifier's gain to be about unity (one). Maybe the op amp isn't working properly because of the high input bias current combined with the high value of R6.

Not the answer you're looking for? Browse other questions tagged operational-amplifier amplifier audio preamp single-supply-op-amp or ask your own question.

2
Electret Mic preamp for sampling and FFT
3
Oscillation in Voltage Rectifier / Scaling Circuit
6
What is simpliest possible guitar active preamp design
3
Guitar preamp problems
0
Single Supply AC Gain Opamp With Unity DC Gain
0
Troubles with mic preamp for headphones with integrated microphone
0
differential to single ended output problem
1
Why does my guitar pre-amp lose it's offset?
8
Why do most guitar amps have a preamp and a power amp section?