Am I following the procedure to set the sensitivity in Try Mode for the A1362 Hall-Effect sensor correctly?

I am following Figure 5 pg. 18 of this data sheet: Vp(HIGH), Vp(MID), Vp(HIGH), followed by 0-255 Vp(MID) pulses that increase the sensitivity each time Vp(MID) is applied.

However, when I bring the north and south poles of a strong fridge magnet close to the hall effect sensor I always get approximately 4.5668 volts for North and 0.3012 volts for South, no matter how many Vp(MID) pulses I send to VOUT pin.

The circuit I am using is here:

You may get a little confused about the 27V (Vp(HIGH)), 15V (Vp(MID)), and 3V (Vp(LOW)). Basically I have a single 30 Volts power supply that I am dialing up and down to get the high,mid, low voltage pulses needed to program the sensor.

But this still does not explain why my north and south pole readings do not change significantly even though I have sent up to 30 Vp(MID) pulses after the initial Vp(HIGH)-Vp(MID)-Vp(HIGH) pulses.

I would greatly appreciate it if someone could point me in the right direction.

The way I am doing it, instead of dropping down to Vp(LOW), the voltmeter reads 2.0V when the jumper wire is unplugged, which is the "Pre-Programming Quiescent Voltage Output" as shown on pg.4 of the data sheet under "Pre-Programming Target".

So I don't specifically send out a Vp(LOW) pulse, but 2.0 volts is technically less than the 5.5 volts required for Vp(LOW) as shown on pg. 15 of the data sheet.

So I am quite confused about why the hall-effect sensor's sensitivity is not changing despite following Figure 5 exactly as shown.

You're probably suffering from bounce. If you were to connect an oscilloscope to the Vout pin (I suggest you try this) you might well see something like this: 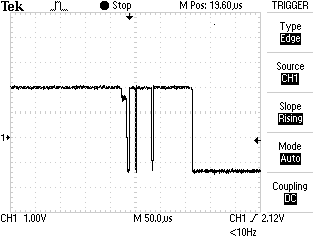 When you plug or unplug the jumper, it will be almost impossible to do this without causing several unintended pulses. I recommend not trying to program it by using jumper wires.

By far the best way to do it is to use a microcontroller and some transistors. However, if you really want to do it by hand, using this circuit might help: 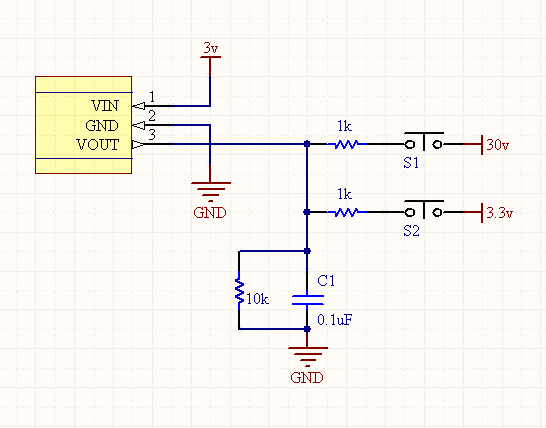 Here, you can press S1 to pulse Vout to 27v, and S2 to pulse it to 3v. C1 will help to remove any switch bounce. I don't guarantee that this will work though.

Not the answer you're looking for? Browse other questions tagged sensor magnetics hall-effect or ask your own question.