If all the resistances inside a passive resistive network is multiplied by some factor, what will happen to the thevenin resistance?

Lets imagine an arbitrary passive resistive network, a black box. Let its Thevenin equivalent resistance across some terminals \$a,b\$ of the network be \$R_{th}\$ ohms. Now lets imagine another network having the same topology as the first one, but all the corresponding resistances are now multiplied by a positive factor, \$K\$. The Thevenin equivalent resistance of the new network across \$a',b'\$ is \$R_{th}'\$.

Can the same be said about a passive arbitrary RLC network?

I'm fairly sure that the new Thevenin resistance will scale up by the same factor applied to the individual resistors even though you have not specified the network.

Can the same be said about a passive arbitrary RLC network?

No that can't be arbitrarily said because the resonant frequencies will change and this means at some frequencies the Thevenin equivalent resistance will bear no relationship to the magnification factor in scaling up R, L and C. If L increases and C increases then resonance frequencies drop. Even if you scaled up the reactances (in order to keep resonant frequencies from altering) you would end up with different Q-factors and that would mean no equivalent mapping from the original circuit to the scaled-up version. 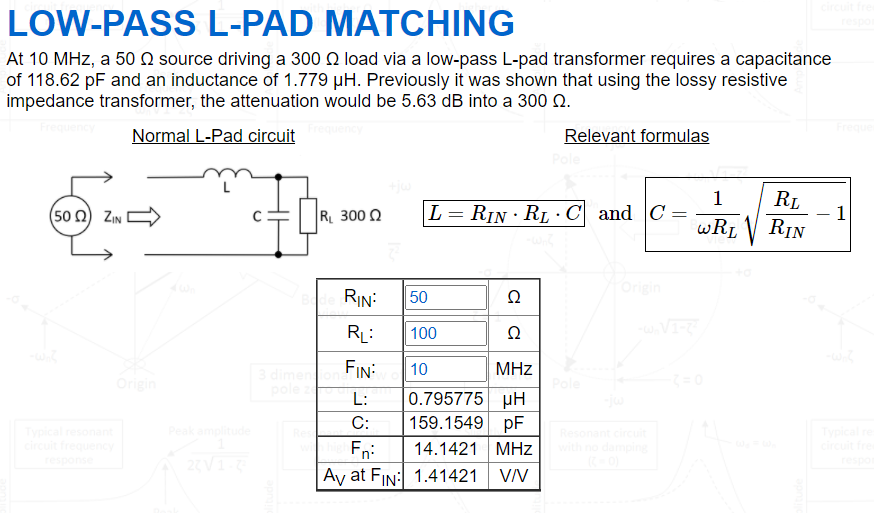 It matches a 50 Ω input to a 100 Ω load at 10 MHz. The inductor value is 0.795775 μH and the capacitor is 159.1549 pF. If the input and output resistances were scaled by 2, then the inductance would double and the capacitance would half (reactances both doubling).

So, there will be some examples at certain specific frequencies where this will be true but, it's by no-means a generalism.

Linear circuits are called "linear" because the equations that describe them are linear.

Therefore, it's more than obvious that all the state variables (voltage and currents) and all their linear combinations will linearly scale with K.

R will scale with K.

That applies to RLC networks as well.

Infact, in the phasors domain all KVL and KCL equations don't change and stay linear except for the coefficients of the unknowns that become imaginary.

If you indicate capacitances as a "resistance" 1/(C s) and inductivities as (L s) (s being the variable for LaPlace transforms which you can replace with 2 pi j f for periodic analysis at particular frequencies), by scaling them up similarly (namely increasing inductivities by the same factor as resistances and scaling capacities down inversely), the polynomial (for s) or complex (at a fixed frequency) resistances of the whole network will scale up accordingly.

Q factors sqrt(L/C)/R (series case of RLC component; the parallel case is the inverse) will remain exactly identical as sqrt(L/C) scales up with the same proportionality as R.

Not the answer you're looking for? Browse other questions tagged passive-networks thevenin ohms-law norton or ask your own question.

2
A question on Thevenin and output impedance
2
Choosing voltage divider resistor values
0
Calculating Short Circuit Current when Nortonizing a Circuit
0
Thevenin's Theorem: Why is there a \$R_{th}\$
1
Parallel RLC Circuit: how to write differential equation?
2
How do we derive the values for these Thévenin equivalent circuits?
2
On the topic of Quality factor in arbitrary RLC resonance circuits