How to minimise capacitive effects on signal switching with MOSFETS?

I am designing a circuit where I need to measure the mid-point of a voltage divider with a 1kHz square wave, where the output is buffered with an op amp. The upper resistor is a fixed resistance, the lower is a sensor. The simplified circuit looks like this: 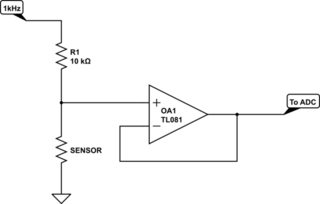 So this all works fine, and is very straightforward.

However, I need to measure a wide range of resistances, so for accuracy, I want to switch in a different fixed resistor as a "drive" resistor when needed. I decided on using MOSFETS for this. The circuit now looks like this: 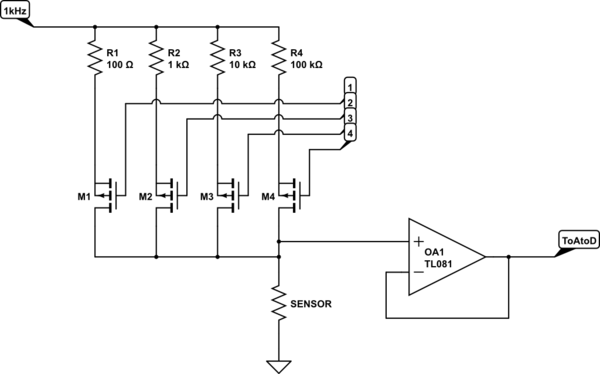 Which isn't too difficult to understand. If the 1k resistor is needed, M2 is switched on, the others are off, and so on.

The problems happened when using the 100k resistor. My op-amp output had a curve to it, rather than a nice square wave, like it did with all the other ranges. It was almost like some stray capacitance was about, so I did some investigating and eventually realised it was down to the capacitance of the MOSFETS and being in parallel, the problem was obviously worse.

The MOSFETS being used are the IRLML6402 which has an input capacitance of 633pF per FET. With 4 of them, that's just over 2nF, which made sense when I analysed the curve a bit closer, so I am assuming it is the input capacitance here. Someone please correct me if I am wrong.

So, I have been looking at FETS with much lower input capacitance to try out, but it will be a few days before they arrive (yay to component shortages!), so in the meantime, is there anything I can try? I am not even 100% sure this will fix the issue, as I haven't been able to try any other components, so can anyone see any problems with this approach? Any assistance or help is appreciated.

You may have trouble using MOSFETs as switches in that configuration, because they are all acting as source followers. This means that the source potential follows the gate (with an offset equal to \$V_{GS(TH)}\$ ≈ 2V), and the MOSFET is therefore a unity gain buffer rather than an on-off switch.

The on/off state of a MOSFET is dependent entirely on the voltage difference between its source and gate. As you have it, with the MOSFETs on the signal side of the divider, gate potentials guaranteed to switch completely on or off the MOSFET will vary with the input signal! The gate potential will have to be beyond either extreme of excursion of the input signal, and you will have to build some very special gate drive hardware.

The gate capacitance of a MOSFET is not the problem you believe it to be. It can certainly cause the on/off switching speed to suffer, but it can't determine to any degree how "on" or "off" the MOSFET is. I think in this application you should be more concerned with the "on" resistance \$R_{DS(ON)}\$ of the MOSFET.

The circuit below is a small adjustment of yours, with the transistors and resistors swapped. Now the sources are connected to the input signal, which prevents the transistors from operating as source followers, but it doesn't solve the gate control signal amplitude problem. The digital gate potentials must be guarateed to be higher than the highest input signal you expect, or \$V_{GS(TH)}\$ less than the lowest input potential you expect: 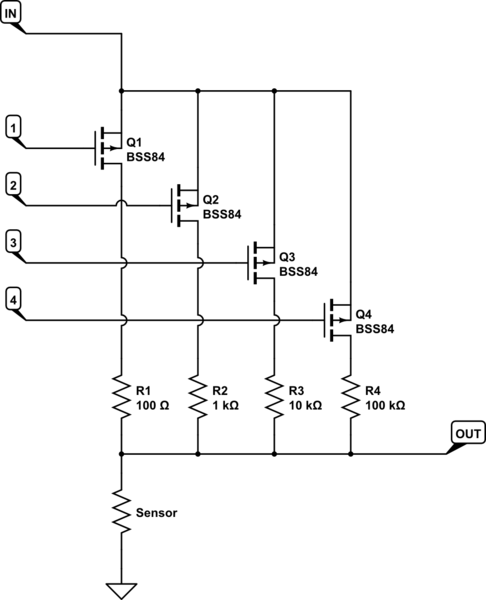 Since you probably wish to be able to use standard 3.3V or 5V logic signals at the gates, to switch the MOSFETs on or off, you need the MOSFET source connected to a potential where those logic levels are guaranteed to produce states of \$V_{GS} << V_{GS(TH)}\$ and or \$V_{GS} >> V_{GS(TH)}\$. That usually means connecting an N-channel MOSFET with its source connected to ground (0V), a configuration called common source.

The following circuit will ensure that the MOSFETs are unambiguously on or off when the gates are presented with standard logic level potentials. They will behave as switches, open or closed, as you require. However, that simplicity comes at a cost - they are N-channel devices, common soource, and your sensor has to be on the high side: 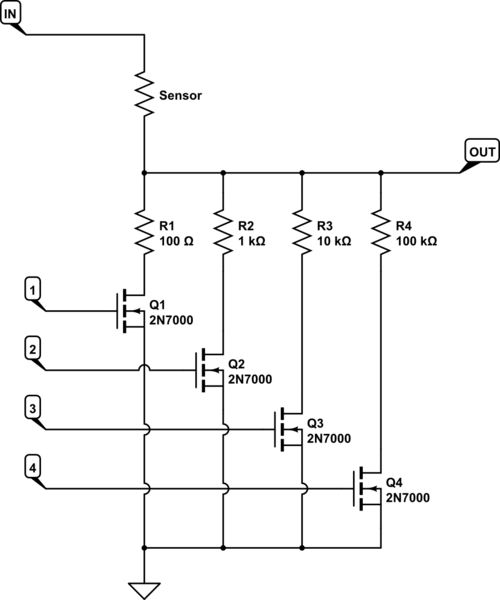 CMOS analog switches are the typical choice with various RdsOn. The lower the maximum Vdd rating, generally the lower the RdsOn from 1k to 10 Ohms. 74HC's might be suitable https://www.mouser.com/c/semiconductors/switch-ics/analog-switch-ics/?q=4066&sort=pricing

Depending on noise immunity for stray C, you may prefer to connect the common inputs to a low impedance source rather than the high impedance input of a CMOS Op Amp , loaded by sensor.

Think about CMRR of the cable noise and balancing impedance as a differential input. This gets more challenging from a long sensor cable.

Not the answer you're looking for? Browse other questions tagged operational-amplifier circuit-analysis analog or ask your own question.

3
Opamp input impedance on high frequency
2
Sine to Square wave converted using only transistors
0
Driving an audio speaker design questions
0
Voltage output across purely capacitive voltage divider when PWM/Square wave signal is applied?
0
What opamp configuration to choose to measure 1kHz square wave with 1MHz signal modulated on it
2
How do I transform a unipolar signal to bipolar signal?
0
Explanation of the transient in an integrator circuit