How to improve symmetry of +/-1 gain circuit?

In an attempt to have a square wave with a voltage-controlled amplitude, I've made this little circuit: 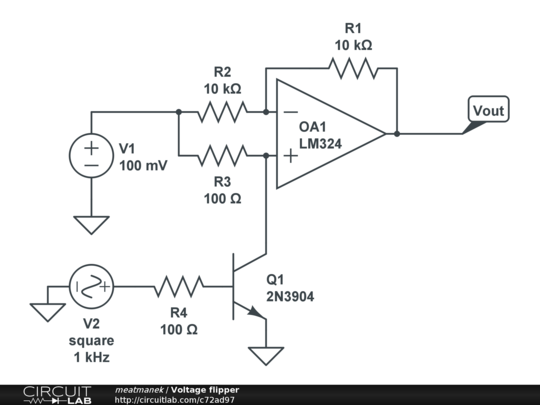 Unfortunately, when negating, it has a slight offset from -Vin.

I assume this is because the BJT doesn't pull all the way to ground.

What are easy ways to improve the symmetry of this circuit? Ideally I'd be shooting for <1mV error between the positive and negative sides.

Using a MOSFET for Q1 may be easier.

A larger value of R3 will allow the transistor to have more effect. Other stuff will need to be changed to suit.

Massively overdriving a BJT so that it has a forced beta of say 0.1 or even less allows a very low saturation voltage. Long ago I had a BJT switching a resistor and the junction needed to be ~ 0. Any Vsat added to the signal at the other end of the resistor. Driving the base for 10 x as much current (or more) as the collector greatly improved the result.

If you can find a whisper (or more) of negative bias lying around you may be able to mix some in. Using an opamp with feed back and the ability to pull to or below ground would be useful.

Whether you can do the following depends on circumstances and desired realness [tm] of circuit. - returning negative lead from local ground to psu via a diode gives you a point one diode drop below ground on the cathode side of the diode. Can be very useful. eg single supply opamps with their ground pin returned to -Vbe below local ground can then truly genuinely swing their Vout to local ground rather than to N mV above it.

The easy way to guarantee symmetry is a high-pass filter, such as an RC after the output of the circuit. But this necessarily puts a lower limit on the frequency that the circuit will pass.

Another easy solution would be to replace the BJT with a FET of some sort.

Another variation would be to use one op amp to generate an inverted signal, and then use a multiplexer to select whether an inverted or non-inverted signal should be fed to the input of a voltage follower (second op amp). The behavior of this approach should be relatively symmetric, since the current flowing through the multiplexer should be very small, and should be basically the same regardless of whether it's passing through the inverted or non-inverted form of the original signal.