In PCBs, why is copper etched away instead of added?

I know that in virtually every case, PCBs start as a substrate with a layer of copper laminated on top, which is then etched away, leaving the traces. But why are the traces not added on an empty substrate instead?

I am well aware that the etching process is standard and very well understood by now, but isn't it a bit wasteful to etch that much copper away (or leave that much unused copper if you're maximizing it)?

Is the reason for this simply that additive manufacturing processes are just too costly, far outweighing the cost of etchant or copper?

I know that in virtually every case, PCBs start as a substrate with a layer of copper laminated on top, which is then etched away, leaving the traces.

This is not fully correct: in modern PCB manufacturing processes, copper is both added and removed.

Often the PCB substrate begins with 17 µm thick copper. First step is to drill the holes, and then an electroless process is used to form a thin layer of copper on the inside of the holes. Then the trace mask is applied and electrolytic copper plating starts. This process adds copper to all exposed areas, bringing the total copper thickness to 35 µm typical (or any other thickness needed). It is important that the thin copper everywhere under the mask connects the traces together so that electrolysis works (it needs electricity to conduct).

Finally, there remains only the original 17 µm of copper to remove in non-trace areas. So the full thickness of the copper does not have to be removed. Furthermore, the copper in the etchant can often be recycled into copper for the plating process, though that requires some chemistry.

This Altium article on PCB processing provides a great overview, including this diagram: 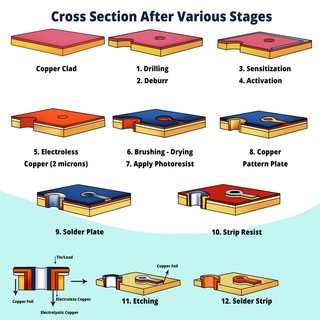 Part of the PCB manufacturing process involves bonding copper foil onto the substrate. This is hard enough to do well when it's done across the entire panel.

But why are the traces not added on an empty substrate instead?

Because the traces are tiny, and need to be bonded onto the panel in such a way that they are laid out accurately with respect to one another and won't come off with soldering or mechanical stress. Short answer -- no one has figured out how to do it economically.

There are PCB manufacturing processes that involve printing a PCB with conductive ink. I don't think I've ever seen such a board, even in a cheap consumer-grade device. Simply based on the fact that it hasn't taken over the world, I think we're back to the notion that etching is easier.

isn't it a bit wasteful to etch that much copper away

Yes, it's just a little bit wasteful. But it's a lot less wasteful in commercial operations, because the copper can be reclaimed from etchant in a way that also regenerates the etchant. For the price of some electricity, the PCB manufacturer has some copper bars to sell back up the chain, and doesn't have to buy as much etchant.

Or leave that much unused copper if you're maximizing it?

Usually when you leave copper on a board it has nothing to do with concerns about using up copper or etchant -- it has to do with using that copper as a ground plane, or bus bars, or some other reason that you want to have copper on the finished board.

What would it take to selectively add Cu to a PCB? You would need a mask, and then a sputtering machine that can move in x-y directions. For fine resolution, neither would be cheap but let's say both these provisions are there.

Therefore, Cu Foils (produced separately) are attached to FR-4 panels using silver epoxy resins to provide reliable adhesion. Later on, after a masked exposure Cu that is not needed is etched away chemically. Commercially, Cu that etches away can be retrieved and reused.

I have heard of silver paste that can be used like a pen to do minor corrections and/or to route traces but have never used the technology myself. Luckily, it is always possible to use wires or 0ohm bridges to correct minor problems on pcbs.

There are CIC - printed "conductive ink circuits" that use silver inks printed on flexible film (usually PET - the same material used to make soda and water bottles). PEN is used if higher temp or more dimensional stability is needed.

Silver ink is more expensive than copper, the screen printing process is not as high resolution as copper etching and silver ink cannot carry as much current as copper. Finally, it is not as durable as copper.

However, it can be very thin and flexible for thin stack ups like inside mobile devices or wearables. Light weight and form to a part. Some companies are also using these film circuits for Film insert molding and make the film part of the structural plastic part. In that case, the film is usually polycarbonate instead of PET.

One important aspect that other answers didn't touch:

Conductive traces and areas on the PCB need to be contiguous in order to serve their purpose.

Additive manufacturing processes are not very good at this. They all involve separate particles that are expected to come in contact in the process. They may as well fail and there indeed will be a great number of oportunities to fail.

And what is worse, to fail partially, passing the QA initially and bringing later a whole lot of the central EE problem - the bad contacts.

In contrast, the copper foil is pretty much contiguous before etching.

Etching may fail, too, with traces being over-etched (leading to no contact where it has to be) or gaps under-etched (leading to shorts or insufficient gap width). But: these failures can be tested for with unambiguous result and/or detected by visual inspection early in the process, generally before populating the PCB.

isn't it a bit wasteful to etch that much copper away (or leave that much unused copper if you're maximizing it)?

The tracks and groundplane on a PCB are formed by removing copper from where it is not wanted, but the copper in the through-holes is applied additively- normally using electroplating. The result is called a plated through hole.

In the nineties there were attempts to build the tracks in the same way, starting with a conductive ink, but reliability was poor- bridging was one of the problems- so manufacturers decided to focus on copper recovery from the etchant to reduce the cost.

18
Why are copper tracks orange-gold?
4
PCB etching troubles. Over etched?
2
Any better alternative to produce PCB than UV etching
0
"Reverse etch" PCB base(not the copper)
50
Why are copper cables round?
2
Is there any PCB design software/extension that can do automatic components placement?
21
Why is the PCB part number traditionally on a copper layer?
1
Why are my copper PCB solder pads oxidizing?
1
PCB photoresist method etching incomplete - only etched around borders of traces