How does the current source work?

I am reading an application note and find a current source circuit as the following. Why the lower AD8610 is needed since the output voltage of the upper AD8610 is determined by VIN and the two 2kΩ resistors? 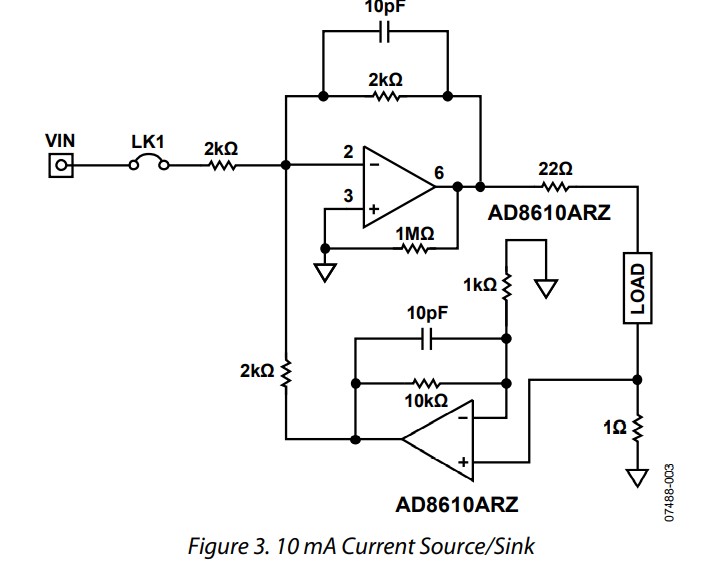 If you eliminate the top 2k\$\Omega\$ resistor it does work as a constant current source/sink. -110mV in should give you 10mA out. Stability may not be ideal- maybe there's a series capacitor missing.

I don't think the circuit is "funny" at all. Over the years it and its variations have appeared in app notes from many manufacturers.

Because the non-inverting input of the upper opamp is grounded, the entire function of the circuit is to keep the inverting input at 0 V. The circuit is similar to the "classic" constant current circuit that has only one opamp. The lower opamp circuit has some gain, but other than that the constant-current math is the same.

The circuit works to maintain a constant voltage across a constant resistance, thus creating a constant current through anything that is in series with that resistance. While there is a circuit element named "LOAD", see things from the opamp's point of view. Voltage-mode feedback is picked off at the top of the 1 ohm resistor, making that resistor the actual load. As with any normal, linear, inverting opamp circuit, the opamp works to produce a voltage across the load that is the opposite of its input voltage, modified by the feedback network. In this circuit, the feedback network has non-inverting voltage gain, so the output current is 1/11th of the input current.

Not the answer you're looking for? Browse other questions tagged current source or ask your own question.