I'm finalizing the routing for an eighteen-layer board that requires many, many differential-pair traces to run at speeds up to 16 Gbit/sec. (FYI: 100 Ω impedance, Isola I-Speed cores and prepreg.) These traces come from an MPSoC (BGA) with TX/RX pairs at 100 Ω impedance. All vias must be through-hole.

I'm having trouble deciding whether my differential-trace pairs should spread out suddenly or gradually. I've read that in high-speed designs, trace width (not trace gap) will gradually fan out right before a pad to the pad width in order to minimize the sudden impedance change, similar to a tear-drop effect. Though taking this notion and extending it to trace gap seems logical, it poses two questions:

Here is an example from the aforementioned eval board, with the sudden trace gap-changes circled in red. 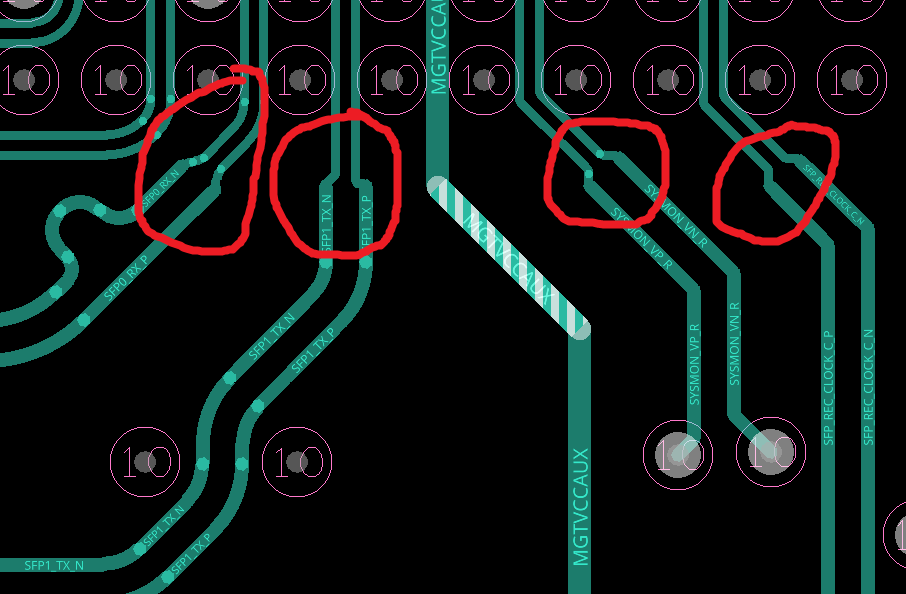 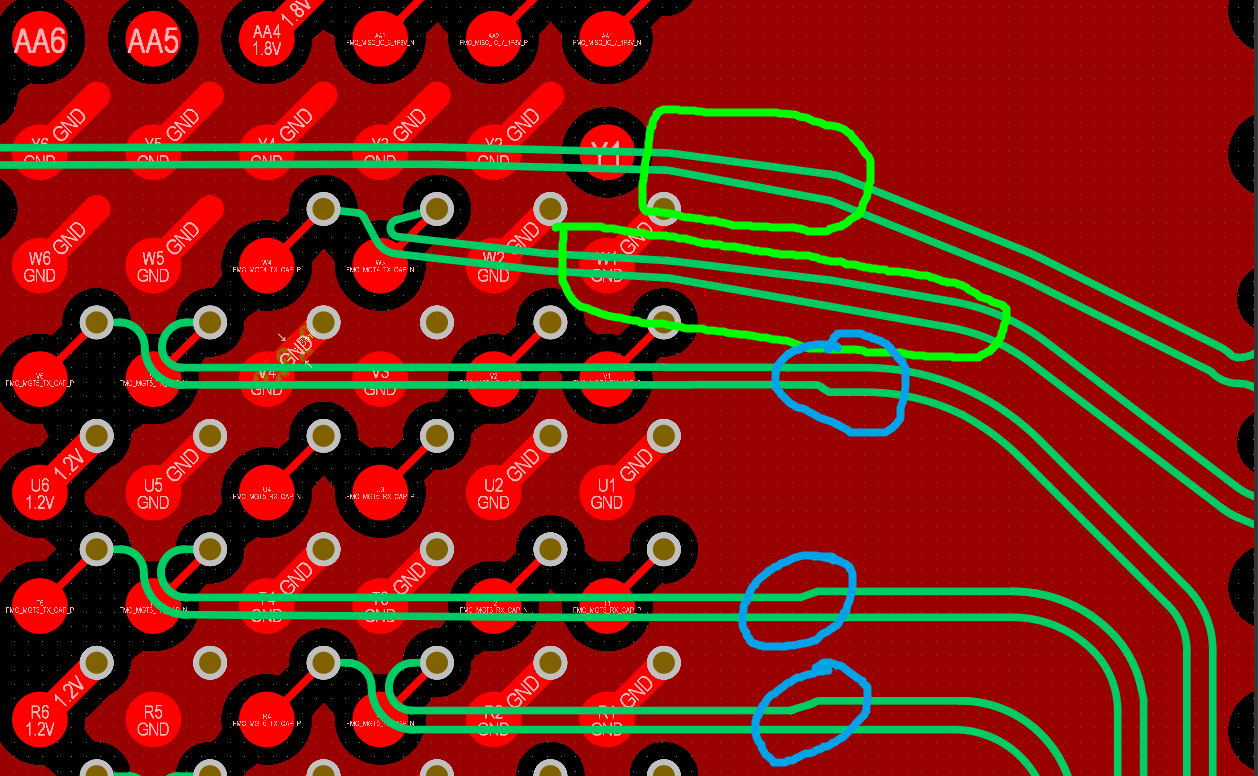 A couple of things first:

There is no impedance change if done right. Note how they narrow the trace width in the eval board when going from the two single lines to the tight diff-pair. This is done to get the same impedance before and after the change. They were not motivated to design a gradual change as explained above. So they went for the sudden step change. Apparently, it is good enough in that application.

More of a reference than an answer, but, According to IPC-2223E (Sectional Design Standard for Flexible/Rigid-Flexible Printed Boards)

"The conductor pitch for differential pairs used for controlled impedance should be kept constant along the length of the conductor to avoid unwanted signal noise / signal mismatch."

I expect this is generally applicable, rather than just being good-practice for flexi-rigid PCBs. 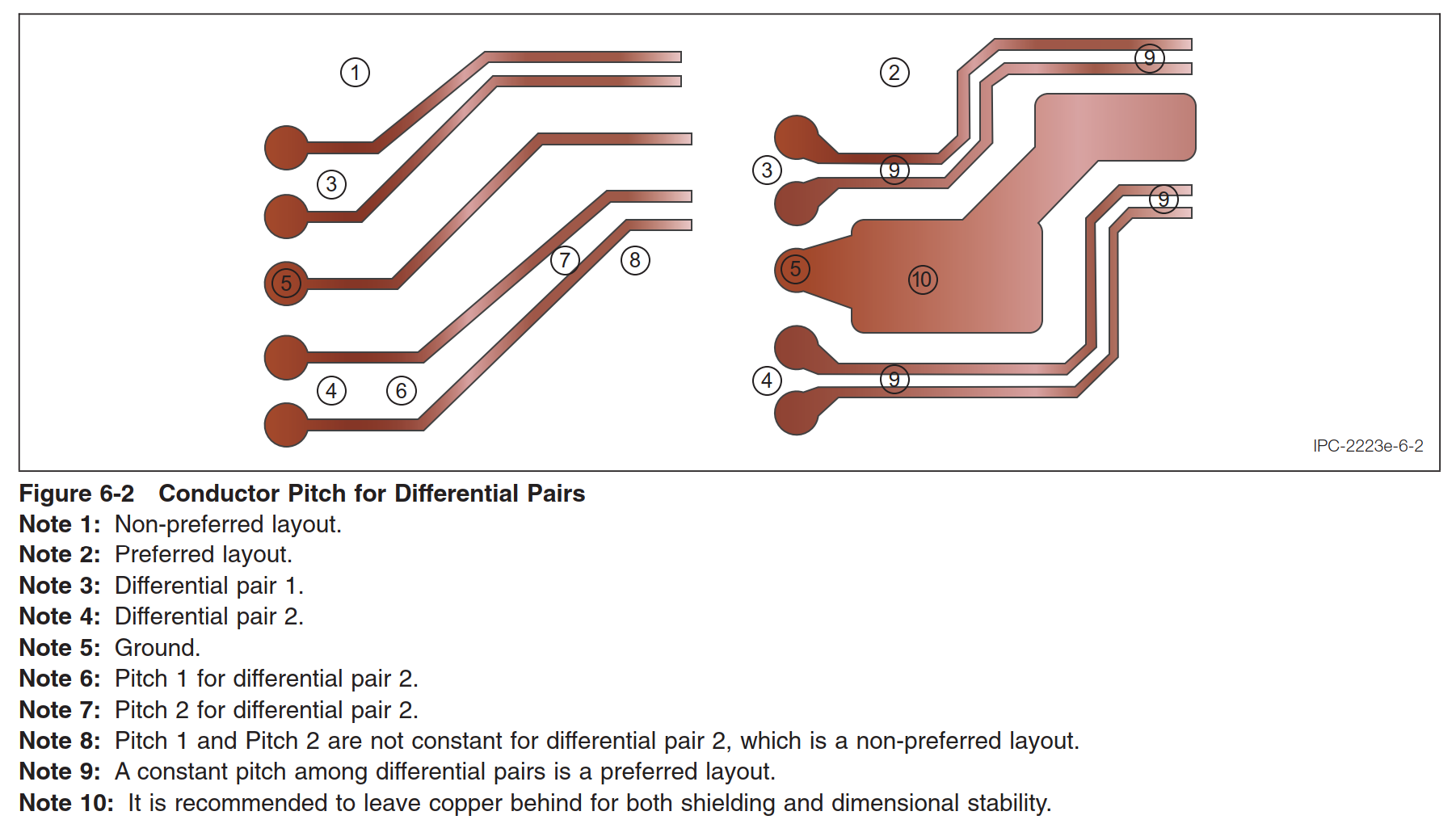 Not the answer you're looking for? Browse other questions tagged pcb pcb-design impedance differential high-speed or ask your own question.

13
How do I lay out PCB traces for a given "differential impedance"
9
Via in between differential traces - how bad is it?
0
Altium - Impedance in Signal Integrity and DRU differ
1
Trace width for breaking out 100Ω differential microstrip from 0.5mm pitch BGA
0
Advice for 90 Ohm traces of a USB 2.0 HUB
0
Parallel trace signal integrity: Increasing width to match characteristic impedance vs increasing trace gap
0
Do I need to worry about single-end impedance in a differential pair?
4
Account for Via Stubs When Calculating Impedance?
0
MIPI DSI/differential pair layout guidance