Voltage vs frequency in RLC circuit

Here is the graph b/w V vs f. Why at some particular frequency (fc), the capacitor voltage goes beyond supply voltage (Vs) value? Explain for L too. 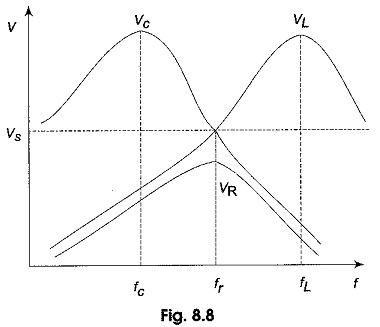 Why at some particular frequency (fc), the capacitor voltage goes beyond supply voltage (Vs) value? Explain for L too.

That graph is just plain wrong. The scaling is terrible and grossly non-linear.

This is just plain wrong: - 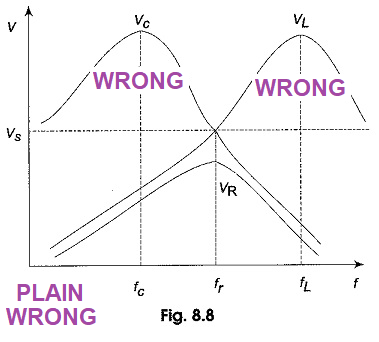 You'll never find any value of R, L and C that produces a graph that looks anything like this. 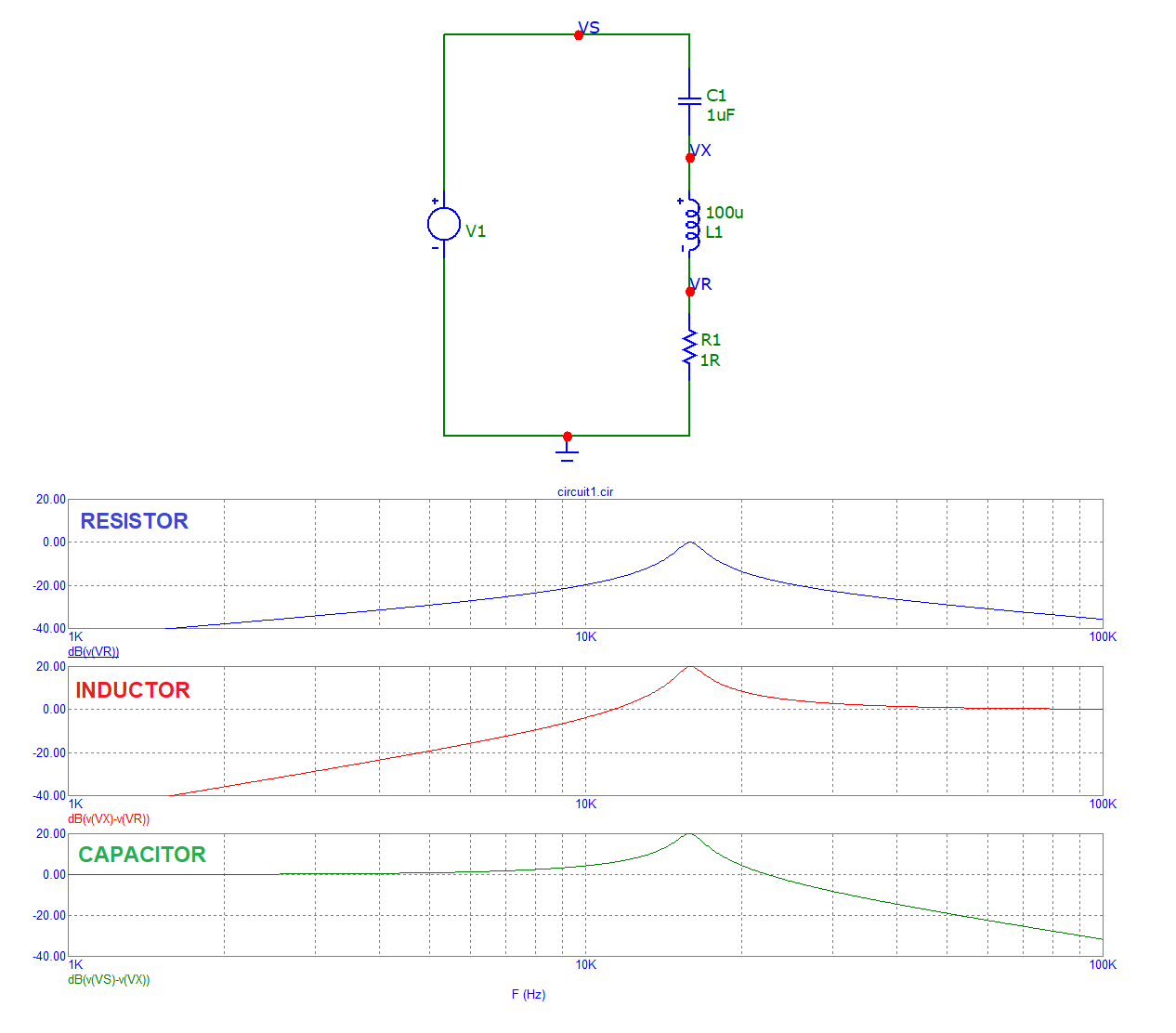 All three voltages peak at the same frequency. So, once you forget the incorrect diagram on the website you linked, the answer to your question is simple.

Why at some particular frequency (fc), the capacitor voltage goes beyond supply voltage (Vs) value?

At series resonance, inductive reactance and capacitive reactance values cancel out leaving just the resistance across the source. This means maximum current at this frequency and, the value of the current is Vs/R. You can then use that value of current to determine what the voltages are across either L or C. And what you find is that with small values of R, there is voltage magnification at resonance. Here's a web site (by me) that does the same: - 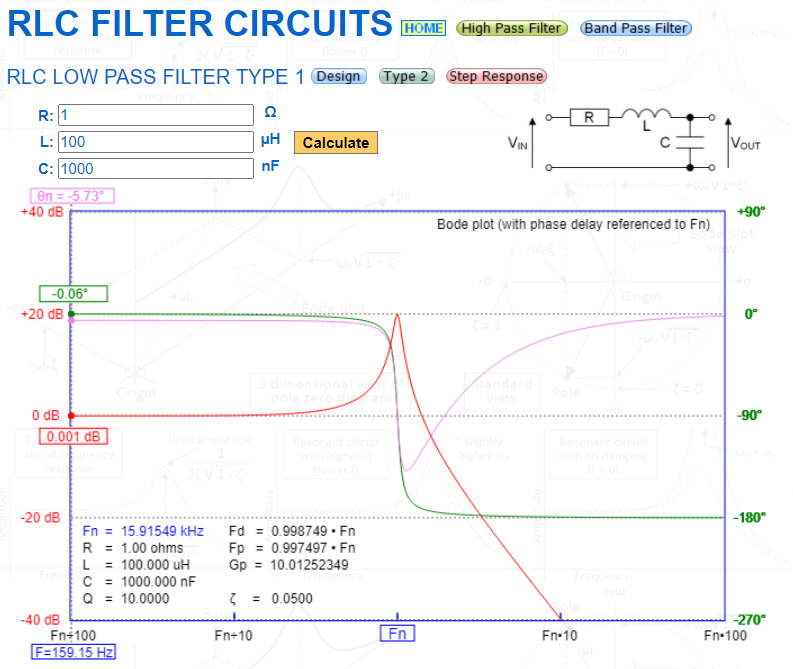 Note the capacitor voltage magnification of 20 dB (in red). This uses 1 Ω 100 μH and 1 μF as per the microcap simulation higher up. If I change the resistor from 1 Ω to 10 Ω, the magnification is less obvious: - 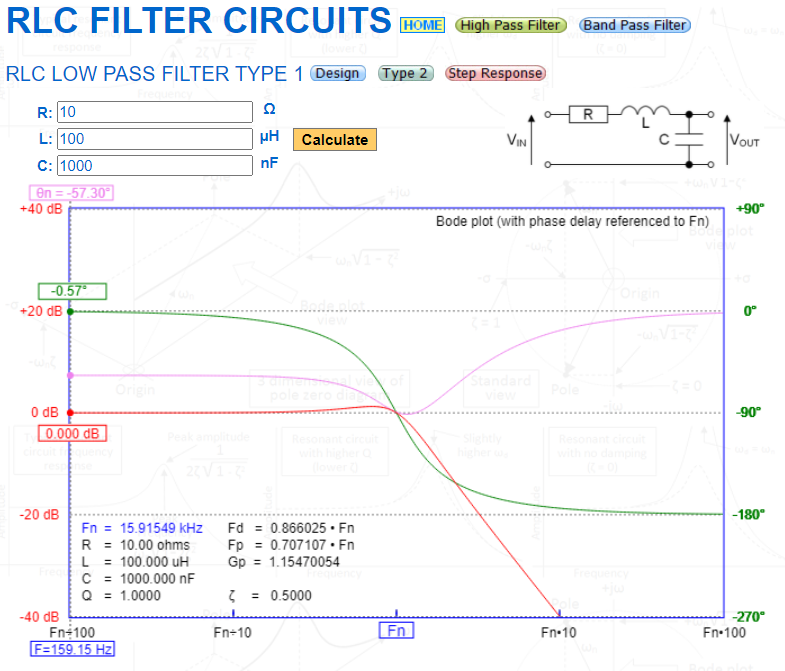 This is a fundamental aspect of tuned circuits in electronics.

I am going to split this answer into two parts: (1) how does the voltage and current depend on frequency, and (2) how can voltage on one component be higher than the source voltage.

The Ohm's law states that \$V = I \cdot R\$. This equation would be the same if voltage and current change with time: \$ v(t) = i(t) \cdot R\$. In other words, instantaneous voltage equals instantaneous current amplified by resistance. It does not matter if voltage or current are sine waves, square waves etc.

However, the above equation does not hold true for capacitors and inductors because they are energy storage devices. Now think for a moment in a discrete world - total energy in a battery equals energy from a previous step plus whatever we put into it now

You are ready now for equations that describe voltage-current relationship for inductors and capacitors:

where L and C subscripts denote inductor and capacitor. Please note that although I am using here energy storage equivalence with simple mathematics, the above two equations actually come from physics.

Now try to imagine what happens with the inductor voltage when inductor current is a sine-wave:

You can read this as: at some fixed frequency, inductor voltage equals inductor current phase shifted by \$90^\circ\$ and amplified by \$ Z_L = \omega L \$. If you compare this to Ohm's law, you see that impedance \$ Z_L \$ is equivalent to resistance \$ R \$, the only difference is that unlike resistance the impedance varies with frequency \$ \omega \$. Additionally, Ohm's law does not take into account the phase shift. You can use the same reasoning for capacitors.

We know now that voltage-current characteristics for inductors and capacitors is also linear, the only difference compared to simple resistors is that amplification depends on the frequency and phase shift should also be considered.

When you have an RLC circuit, you actually have two energy tanks (L and C) and one load (R). The energy tanks do not consume energy, ie the energy is still in the circuit and does not go away. The load consumes energy, and when I say consumes I mean that they convert electrical energy to some other form (heat etc.) and the energy is lost from the circuit point of view.

Imagine the two energy tanks as two connected water tanks, where water level (height) equals voltage. When you bounce some water from one tank to the other, water level changes in the tanks. If one tank is empty, the other one is at maximum. But! What if water level can go negative? This is exactly what happens with L and C:

The graph is poorly drawn, I agree, and, for my part, I don't know why they would bother adding properly formatted math equations but Paint-level drawings, instead of actual simulations. Oh well.

The point that the picture is trying to make is that the frequencies are never equal except at resonance. Their derivations show the formulas for both the capacitor and the inductor, and if you equate L=C=1 and R=x, then both formulas reduce to the following:

If you plot these two on a log Y axis (representing the frequency, X axis being R), you'll get this graph: 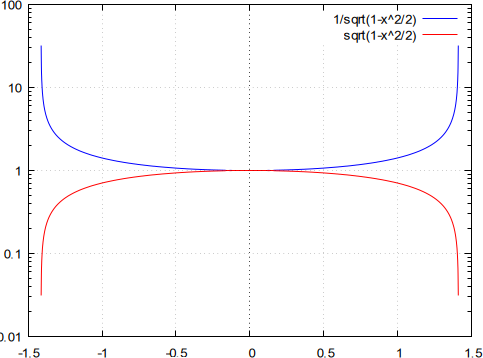 Since x represents R, the negative side can be omitted. What's left tells you that when R=0 the two frequencies coincide, and when R!=0 the two differ, and they can differ by more than a decade; in fact, they can be at ±∞, if you take the limits. But their amplitudes will drop dramatically, in fact, even with R=1 the peaks are only about 1.25 dB. For R<1 the effect becomes more and more pronounced, but they also coincide more and more, converging towards resonance. The peaks, themselves, are inversely proportional to R, which represents the damping. No damping means infinite peak (resonance).

This can be easily tested by setting L=C=0.159 (1/2/π). Then, with R=1, a 1 V sine at the input will result in a 1 V across all elements. With R=0.5 the peak will be 2 V for L and C, and with R=0.1 there will be 10 V. The voltage across R will remain constant. What will take time, though, will be the time to reach the maximum voltage: the lower the R, the higher the quality factor, thus the longer the settling time.

Not the answer you're looking for? Browse other questions tagged circuit-analysis capacitor ac inductor frequency or ask your own question.