Seemingly here fails the standard analogy for absorbed and reflected signals/waves given by sea waves and sandy beach. There, the energy transfered by the waves can be only absorbed by the sandy ground or reflected - we obtain reflected waves. There are no other ways the system can lose the energy. So in this simple analogy the non absorbed energy is exactly the reflected energy.

This analogy seemingy can be used to explain the case when we are dealing with network having only resistant components. Then there is to reactance that condition 1 is equivalent to condition 2). Lost power= power reflected by the load

What about the case when our network has nonzero reactance components. Obviously 1) and 2) are not the same as the mathematical conditions tell us. I would like to understand this difference more intuitively. Is there a way to visualize the difference of 1) and 2) on an understandable analogy?

Here's a good reference that would be of help in understanding the difference between the two. 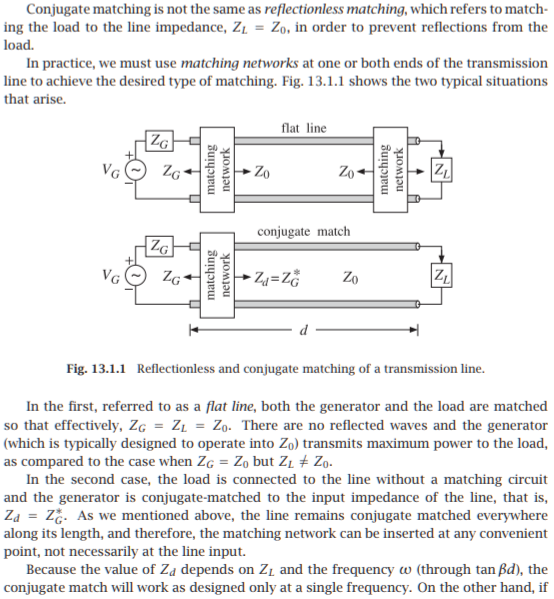 The problem you have is that you are applying all the results of traveling waves on transmission lines with real characteristic impedance to a problem where the base impedance is complex. The normal reflection coefficient when \$Z_0\$ is real:

represents the ratio of the reflected to forward waves and \$|\Gamma|^2\$ is their power ratio.

S. Llorente-Romano, A. Garca-Lampérez, T. K. Sarkar and M. Salazar-Palma, "An Exposition on the Choice of the Proper S Parameters in Characterizing Devices Including Transmission Lines with Complex Reference Impedances and a General Methodology for Computing Them," in IEEE Antennas and Propagation Magazine, vol. 55, no. 4, pp. 94-112, Aug. 2013, doi: 10.1109/MAP.2013.6645145.

It's complicated, but it's easy to see the problem, as at conjugate match with the normal definition of reflection coefficient,

which is not zero if \$X_0\$ is not zero. You need to work through the maths to see that when the base impedance is complex, the reflection coefficient defined in eqn(1) does NOT represent the ratio of reflected power to forward power. In the paper above, then define something they call power wave scattering parameters, and these are much the same except that the reflection coefficient is defined as:

and they show that this has similar characteristics as the one we know well when \$Z_0\$ is real. Clearly when the load is conjugately matched then \$\Gamma=0\$ and it behaves as we expect.

Read the paper, it's too involved to reproduce here.

I guess I should apologise - it's not intuitive - when the impedance is complex I think you need to follow the maths.

IMO, The OP wants to understand the nature of it, close to the intuitive level, not relearning the calculation. @CyrilMechkov will explain it better, I am sure.

I expect responses of "this is an absurd". If so, please post your answer. It is easier to judge others than self.

See what "Reflection coefficient" means here. Honestly, I did not read that lengthy text, but relying on staled memory.

That Wikipedia text explains how to draw "reflection coeff" = (ZL - Z0)/(ZL + Z0). But, still wonder why that happens in first place: Gamma = V_reflected/VI_incident. Wikipedia has a good illustration, too. A curious mind still would ask why it happens.

I cannot describe the temporal side in general, and it is explained well at many other places. So, let's look at the moment of an "incident" signal just arrived at the load,and the load just have been fully influenced. Then the incident side and the load side see each other, face to face, while standing on the signal they shared. And the amount of share is proportional to the resistance (we start with pure resistive load first). The resulting effect would look like below. Thus, the load effectively drives the source with "VL - Vi". When the matching impedance of two sides results in sharing the equal amount of the voltage, there will be no reflection, 0 = VL - Vi. Thus the energy is fully consumed on the load. 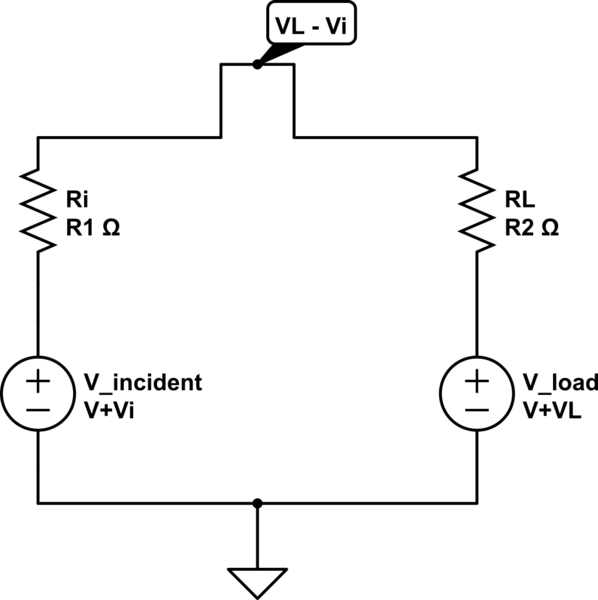 Now, we can rush to the rest (and I need to do some other works), "why conjugate" part. The reasoning above is based on the pure resistive load, where complex form of signal does not occur. And, we observed how the maximum (no waste, no return of excess) consumption of the delivered signal was achieved. So, that can happen, too, with "reactive" circuit, if the reactive parts get canceled, thus the remaining pure resistive part (real part of complex), and that pure impedance matches.

I hope Cyrill Mechkov drops by, and explain it in the way that makes more sense.

Not the answer you're looking for? Browse other questions tagged power impedance transmission-line impedance-matching reflection or ask your own question.

2
Maximum power transfer and minimization of signal reflection: When should what be applied

4
Input and Output Impedance parameters of two port network
2
Impedance Matching: Minimum Reflection vs Maximum Power Transfer
0
Maximum Gain and Maximum Power Transfer
7
Why should a receiving antenna be impedance matched to 50 ohm instead of a lower impedance?
1
Understanding L-Pad attenuator
2
is the characteristic impedance of a cable an actual impedance in the circuit?
2
Maximum power transfer and minimization of signal reflection: When should what be applied
0
Guideline for Impedance Matching (simplified cases)
0
Impedance matching with L-matching network: cooking recipe