What does charge on an electron mean?

Now , according to definition of current , current is the rate of flow of charge I.e flow of electrons. Then , I=Q/t . Unit of Q is coulomb & Q is charge. Right , so Coulomb is actually like the No of electrons flowing through the conductor. Also , $$Q=n*e$$

Also , if charge is a number. What does it mean by negative symbol for charge ?

Electrons and protons are both particles that have a charge, and neutrons are uncharged.

Now , according to definition of current , current is the rate of flow of charge

A flow of electrons will give you a flow of charge, or a current. A flow or movement of other charged entities (protons, ions, charged objects like the sectors of a Wimshurst machine) will also give you a current

When measured in consistent units, yes. The I is in amperes, Q in Coulombs, t in seconds.

Unit of Q is coulomb & Q is charge.

Right , so Coulomb is actually like the No of electrons flowing through the conductor.

No, you're getting your units mixed up here. The number of electrons flowing through a conductor is a number, a pure number, a counting number, without units. A Coulomb has units of charge.

True if all quantities are in consistent units. For instance, if Q is in units of electron charge, n is a number, and e is one electron charge. Or if both Q and the electronic charge are measured in Coulombs.

I hope it doesn't say just that. It should say

Charge is not like a numerical value. But the amount of charge can be measured as a number times a unit of charge.

Energy is a whole different ball-game, best to stay away from it in this level of discussion. Both charge and rest mass are intrinsic properties of an electron, it has them whatever the circumstances. When an electron is described as having energy, that's in some context of external fields or inertial frame, and is not an intrinsic property of the electron.

Also , if charge is a number. What does it mean by negative symbol for charge ?

It's just indicating that it's the opposite polarity to 'conventional positive charge', ie opposite to the charge on a proton.

Way back at the time of the Greeks, it was known that there were two polarities of charge, from friction charging of glass and amber. When modern experiments started, with Benjamin Franklin amongst many others, a convention was decided upon, for which to call positive and negative. When much later experiments revealed the structure of the atom, it was found that the convention labelled the proton charge as positive, and the electron as negative.

Some students think, or even insist, that this convention is wrong, as the first time they meet the concept of an electron, it's drifting along metal wires as an electric current. This insistence is just 'metallic conductor Chauvinism'. If you're in a profession where you really need to think about charge carriers, like semiconductors, plasma physics or electrolysis, then you might be dealing with holes or ions as well, and you need to treat all the charge carriers with their correct signs, and there's no practical preference for one or the other.

A convention is just that, a convention. If you stick to 'conventional' current, conventional charge, then it all works out.

Knowing some history is always useful for understanding peculiarities such as the charge of the electron.

Understanding the electricity developed gradually during a long time. In the 18th century it was only a wild assumption that there's some special ingredient (=the charge) in materials which causes phenomenons we call electricity. But that assumption glued together several phenomenons and gave a possibility to make plausible speculations of what there actually happens.

Experiments and the assumption of the existence of charge together forced physicists to decide that there's 2 types of charge; the types are plus and minus. In addition new charge cannot be created, materials contain it some fixed total amount. Electrically neutral materials contain as much plus and minus charges. No idea, how much, but as much both of them. And it's possible with different methods to move charge from one piece to another and see, how the pieces push or pull each other depending do they have the same or opposite net charge polarities.

The force between different polarity charges also gave a possibility to measure the amount of charge. Experiments made clear that that the amount charges can be compared by assuming the repulsion force between two charged pieces obeys Coulomb's law ( a Wikipedia image): 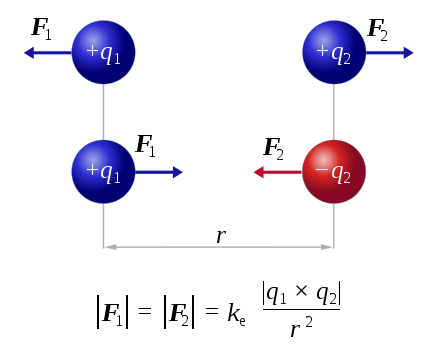 Another as wild assumption as the existence of charge was to assume, that chemical phenomenons are somehow bound to the behaviour of charge. Today (=200 years later) we know that all chemical phenomenons happen just because electrons jump from their orbits of an atom to other orbits caused by another atom.

Physicist Ampere investigated how one could measure how much charge flows through a conductive piece in a given time period. His experiments finally showed that a good measure for the current is how much metallic silver is separated per second from a liquid solution which contains silver as its only metal. Ampere assumed that charge moves as bound to the metal which flows in the liquid due the electric force.

Ampere essentially coated something with silver by using the already known electrochemical metal coating method (=electroplating), but his actual invention was that it could be used to measure the current. No other exactly repeatable method based on as few assumptions was known then.

An unfortunate accident was that the direction of electric current was defined with Ampere's principle (=charge travels with moving silver) and much later it was discovered that current in metals is mostly moving electrons. For this reason most of us have struggled a while when we were first time told that current goes in a wire to the right when the electrons go to the left in the same time. But that couldn't be changed because electric industry was already a multi billion dollar business when the existence of electrons was finally accepted.

But what is that so called charge that we claim to be contained amount -e in an electron?

It cannot have any mechanical explanation, because all mechanical we can see is very much based on the behaviour and properties of electrons. We must accept that the charge is one of the main properties of electrons, something which is opposite than what protons have and what does not occur in neutrons. Another quite as well (or as little) known property of electrons is the mass and it's as well impossible to be explained somehow better mechanically. It's mass and that's it. Only atomic particle physicists have finer theories of what ingredients an electron contains.

\$-1.6*10^{-19}\$ Coulombs is the charge of an individual electron expressed in units of Coulombs. If you express it in units of the elementary charge, then an electron has a charge of -1.

One ampere is a flow of current equal to one coulomb per second. The second, in turn, is defined in terms of a characteristic of cesium-133 atoms.

Note that it's impossible to have exactly +1C or -1C of charge since it would take a non-integer number of electrons or protons.

Edit: From Python we have:

Charge is a property that a particle or body possesses which allows it to exert electric or magnetic forces on other particles which are also charged. It is analogous to mass in this sense. Just as having mass allows bodies to exert gravitational force on other bodies or particles which have mass.

If charge is a like a numerical value , change on an electron means like there is some kind of energy the electron has. Is it that charge has two definitions?

Charge is not any energy that a particle possess. Energy can flow into any system if there is some work done on it. Since the electrons because of their charge can exert force on other electrons, some non-zero work has to be done to keep two electrons a finite distance apart. This work done is stored as a potential energy of the two electron system. A single electron in itself has no electrical energy.

if charge is a number. What does it mean by negative symbol for charge

Unlike the gravitational force which is always attractive. Electrical forces can be both attractive or repulsive. According to experiments two electrons placed together would repel each other while an electron and a proton kept close to each other would attract each other. And any electron proton pair would not exert any electrical force on other electron kept at some distance, so the pair behaves as an uncharged particle.

Based on this it was concluded that there are two types of charges. Like charges repel and unlike charges attract. If we assign positive charge to proton and negative charge to electron, then experimentally charges follow additive property. This additive property easily explains why the electron proton pair exert no electric force. Since they have charges of opposite sign, the net charge of the pair is zero and it cannot exert any electric force on other particles.

Not the answer you're looking for? Browse other questions tagged current charge electron or ask your own question.

2
What happens to the electrons of semiconductors?
6
Discharge and charge rates of a capacitor - Comparing Energy Movements
10
How can a capacitor store charge whilst also passing current?
0
Can an electron carry only one charge?
1
Finding free electron concentration to check authors' calculations for electron drift velocity
0
Flyback and electron flow
1
What actually flows, current electricity or charge?
1
Majority Charge carriers and electron holes
0
KCL when rate of electron flow is given ; To include electron sign or not