There are plenty of quotes on the internet like this one:

"There is nothing like 'analog transistor' and 'digital transistor'. A transistor is a transistor! Simple. One can make either analog circuits or digital circuits out it by making the transistor operate in either linear (active) region or between on-and-off (saturation-and-cutoff) regions respectively. "

Can transistors be changed from operating in active vs saturation-and-cutoff region, after they have been manufactured, and sold. Or, is this mode of operation something that has to be built into the transistor, by balancing N and P regions and whatnot. (If the latter, it sure does seem to me it must be reasonable to refer to things as "active" or "saturation-and-cutoff" transistors, or, with a synonym, analog and digital. But it seems to upset many, so I ask if these modes can be switched between easily after transistors reach market. )

That quote is not wrong, but that doesn't mean there aren't transistors specifically designed for a particular application, switching or linear. It is true that any transistor can be operated in any of the three regions, saturation, cut-off or active/linear, but some transistors are better for switching applications than others.

In a switching application your concern is mainly with the time it takes for a transistor to transit from saturation, through the active region, into cut-off, or vice versa. All transistors can make that transition, but some transistors do it more quickly.

In a linear application, such as an audio amplifier, you never really drive transistors into saturation, or completely into cut-off, and this transition time is of little consequence. You may be more concerned with the linearity of the transistor in its active region, where it spends 100% of its time.

Transistors can't recover instantly from saturation, because it takes time for charge carriers in the base region to vacate, and return the transistor to linear operation, or cut-off. The amount of time it takes for such recovery is a function of junction geometry and doping, and where recovery time is critical you could choose a transistor with better recovery time than others, but you could also mitigate recovery delay by simply designing the circuit in such a way that the transistor is never driven deeply into saturation.

So, while there are transistors designed with fast recovery in mind, for switching applications, all of them have the same saturation/active/cut-off states, and they all suffer from the same recovery issues.

In all cases it is a transistor's periphery, those components responsible for biasing and source/load impedance, which are defining whether the transistor is a switch or a linear device, not the transistor itself.

Here are some articles showing the transistor in two different configurations, with wildy differing bahviour, hopefully helping to show why it's not the transistor itself which is deciding its role, so much as the components around it:

These principles also apply to field-effect transistors (where they would be called "common drain" or "common source"). In common-collector configurations, the transistor is always operating in its active/linear region, but the common emitter approach is more suited to switching.

Using a transistor in an analog or digital mode is an application of the transistor. It can fulfill either application to varying degrees depending on its architecture. Read something basic such as this. 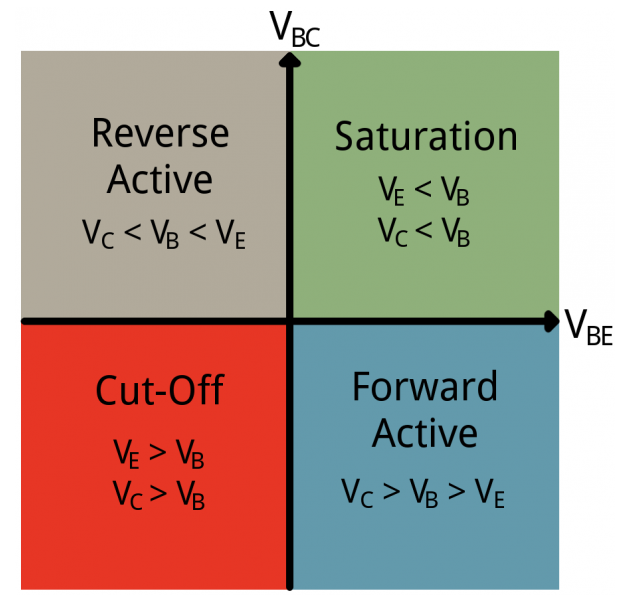 The architecture of transistor will set the performance of the device for any given application. For example RF transistors are quite different to small signal and power transistors as they are optimized for RF applications. This is why there are many types of transistor, they are purpose designed. For example transistors that are used in applications requiring low VCE(sat) are designed to provide the lowest possible VCE(sat). Here's an OnSemi power device, the NSS40500UW3T2G, they don't explain the architecture of the transistor, but clearly the VCE(sat) is extremely low at currents up to 4A.

Not the answer you're looking for? Browse other questions tagged transistors digital-logic analog or ask your own question.