Can you drive a P-MOSFET as a high side switch directly from a microcontroller?

I have an engineering background, but close-to-zero practical experience with discrete electronic circuit design. 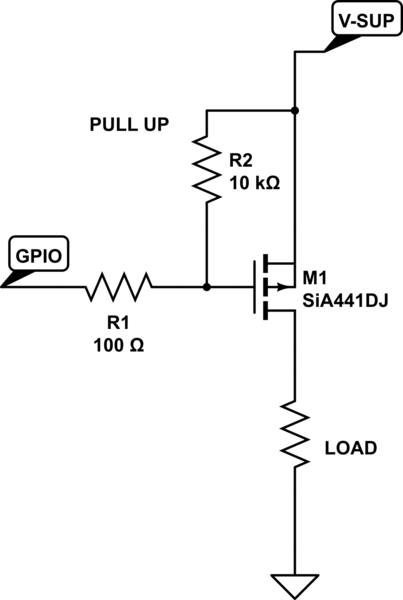 Regarding the above schematic, let's say I have a P-MOSFET (type SiA441DJ), a 10 V power dupply, and an STM32 microcontroller with 3.3V logic level.

The pullup is to put the gate voltage for the off-state.

It it OK to do so? Am I correct or am I missing something?

Regarding the microcontroller STM32F103, the GPIO output driver circuit looks something like this: 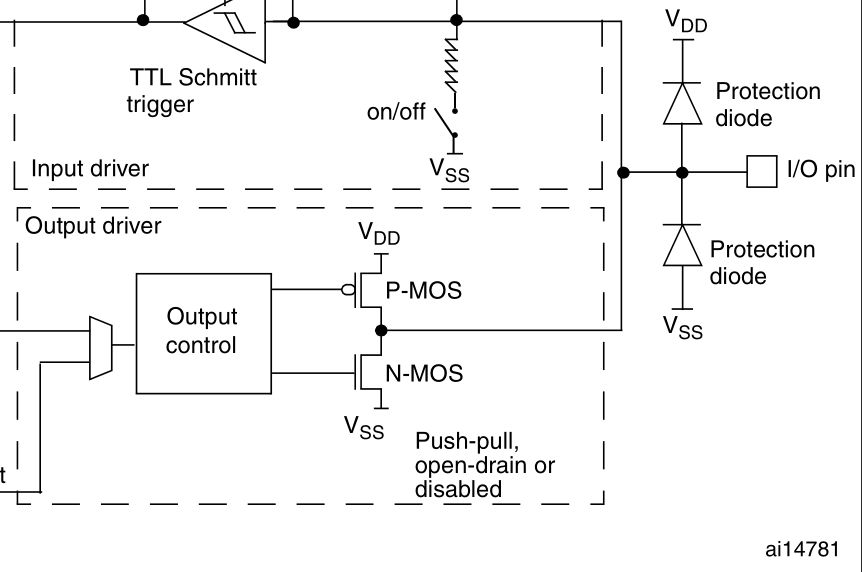 If I use open drain configuration, the P-MOS of the GPIO driver is not conducting, thus open, thus a not existing. So if the GPIO output level is High, also the N-MOS is open, i.e. "not existing". So what's left is the Protection diode, which ties the pin to 3V3. OK then, I understand this doesn't work. Means, the "open drain" configuration is limited to the GPIO output logic.

So my conclusion: I can't directly drive the P-MOSFET this way because the protection diode of the GPIO prevents the Gate voltage to raise to V-SUP = 10 V. That's why I need an additional N-MOS (or NPN) to get a "true open drain", not limited to GPIO hi-voltage level ... That makes sense to me...

I am asking this because lots of examples I found for doing this looks much more complicated, at least using, for example, an N-MOSFET to drive the gate of the P-MOSFET.

Note: A very similar question is here: Can you drive a MOSFET directly from a microcontroller? but is hasn't been answered. The answers had been altered.

If I use a GPIO configured as open drain output, not push-pull, and use a pullup resistor between the gate and source of the P-MOSFET

It this OK to do so ? Am I correct, or am I missing something ?

Theoretically yes but, the devil's in the detail; when the open-drain output from the MCU is not pulled down, it will try to rise to your power voltage level i.e. it will try to rise to 10 volts. This may exceed the absolute maximum voltage level on that MCU IO pin or, there may be a bit more leakage current into that pin that makes the switch less effective. It's all down to the details in the MCU's data-sheet.

I am asking this because lots of examples I found for doing this looks much more complicated, at least using, for example, an N-MOSFET to drive the gate of the P-MOSFET.

This is the normal way because of the reasons mentioned above. See also the notes I added to the new diagram provided by the OP: 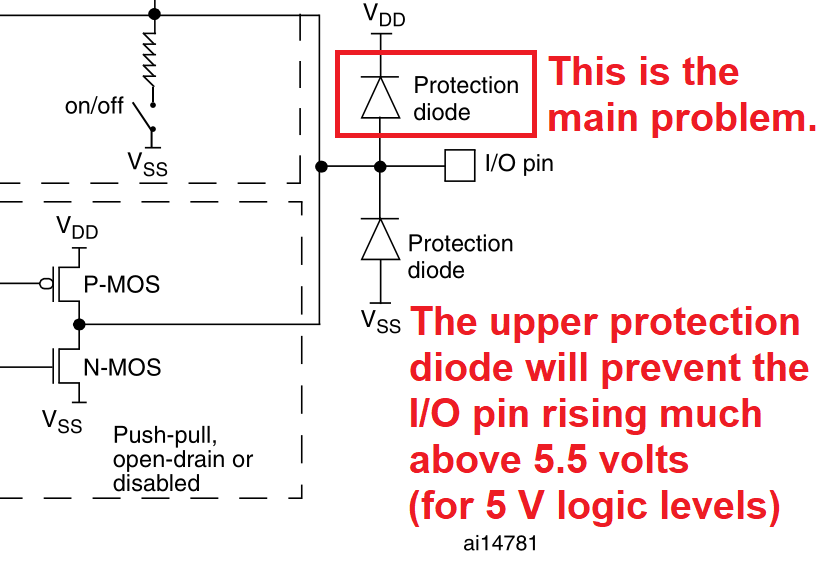 This is a good spot for the oft-neglected common base configuration: 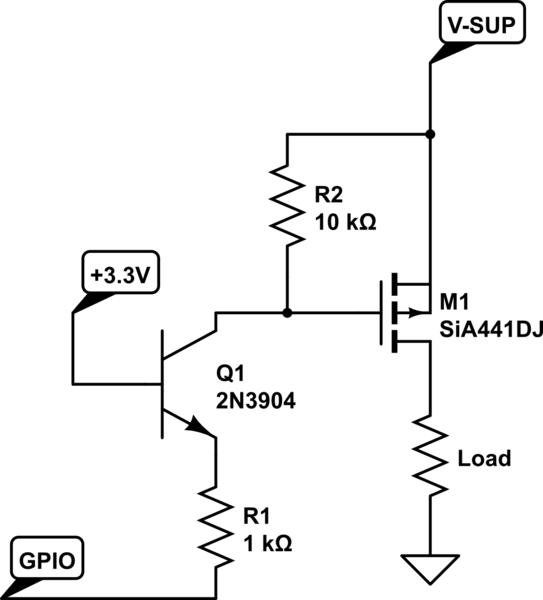 Also the pull-up to 10 V would always force overvoltage on MCU pin, but would also limit injection current into MCU pin. Some 5 V tolerant MCU pins are not diode protected to digital supply voltage, so it could damage MCU pin.

The MCU does not have true open drain outputs, it will just not drive high if you configure it as open drain.

STM32F103 absolute maximum ratings: VDD + 4.0 V on 5 V tolerant pin. 4.0 V on other IO pin. 5 V tolerant pins have no diode so they don't clamp current to VDD. Other IO has 5 mA clamp limit. These are out of specs ratings already, these must never appear in normal operation.

So no, not possible to drive a PFET with 10 V on source.

Controlling the Pmos from 3v3 leads to very ugly workaround it can bring many trouble. Much more clear is controlling with additional NPN/Nmos transistor like below. 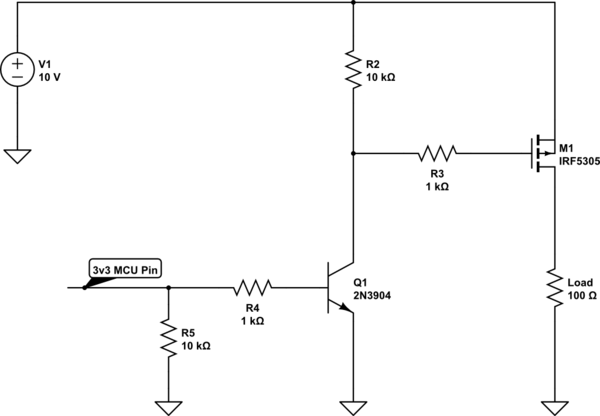 Generally no, if the load voltage is above the controller GPIO logic level, and the GPIO has protection diodes, which is usually the case.

But as an exception, yes if the load Voltage is in the range of the controller GPIO logic level. However, this is only a special case (it is uncommon to drive a strong load with the small voltage of 3.3 V for example).

I also found a good source that shows the difference. It shows using an NPN to drive the MOSFET (see under "P-Channel MOSFET with same load voltage" and "Transistor Driver Examples").

If you put a 7V zener diode in series with R1 (anode towards the microcontroller) you can in theory pull the mosfet gate downwards 3 volts with microcontroller's output and the diode lets only 3V trying to bulldoze into the output in OFF state, which is perfectly acceptable and should give some load current in ON state.

About "some current": See characteristics in the datasheet. 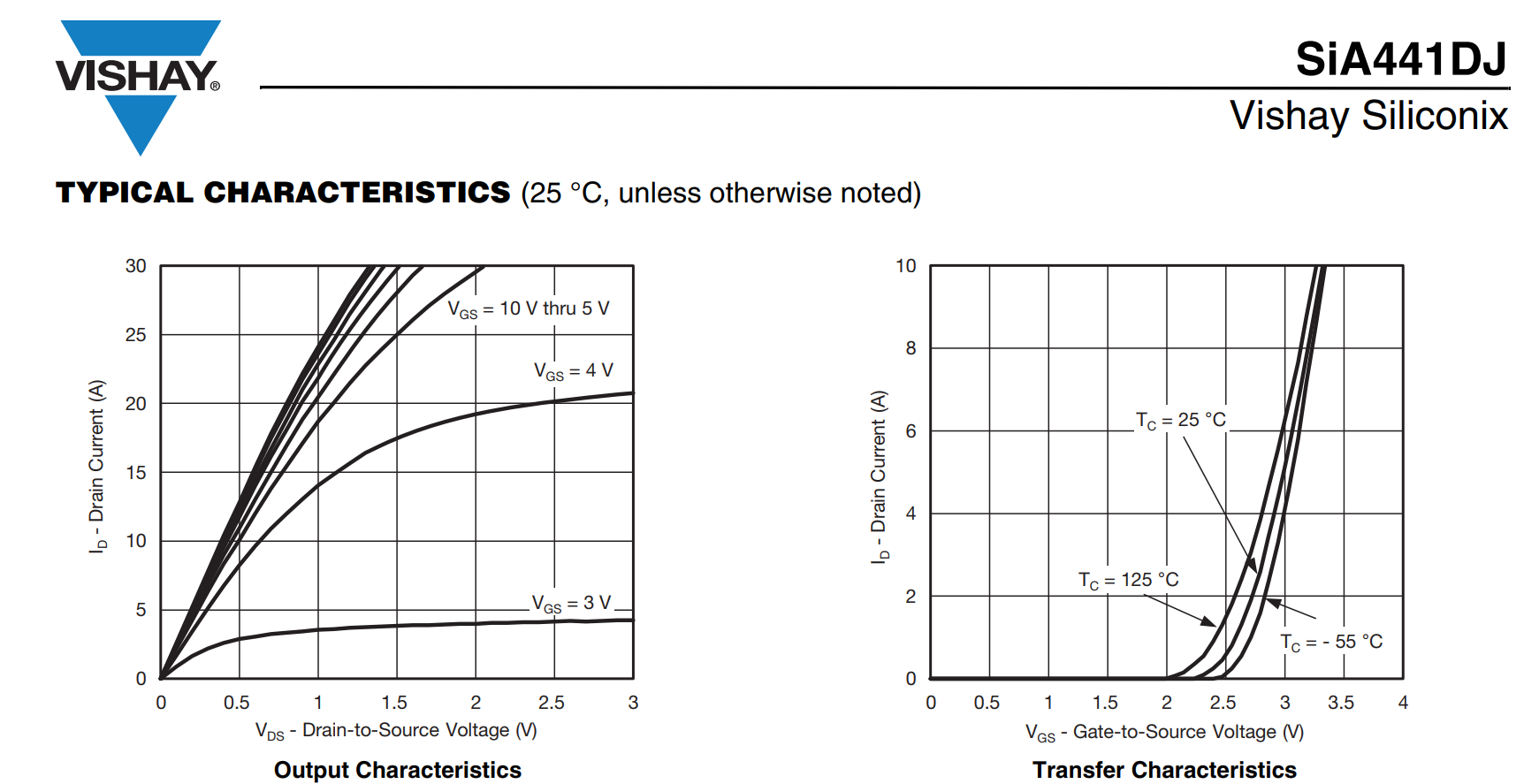 It suggests that 3A Id is possible with 3 volt Vgs and about 0,5V voltage drop as Vds.

There's also the speed factor which should be taken into the account. The zener diode prevents the +10V supply voltage to cause continuous current in microcontroller's output, but the mosfet would be turned to OFF rather slowly when only R2=10kOhm discharges the gate. If you have high switching frequency the energy dissipation in the mosfet due the slow transition can be unacceptably high. In an unlucky case the minimum ON-state width can also be too long.

Beware: the smoke can find its way out if the nominally 10V voltage for some reason jumps up or is switched ON before the microcontroller is powered properly. That possibility can make the zener diode idea useless. The common solution (=use separate buffer stage between the mosfet and the microcontroller) doesn't have this drawback. In addition slow turn off speed problem can be avoided better with the buffer stage due the higher current capability.

Conclusion: The zener diode -idea has serious limitations which need very careful analyzing before the trick can be used. Using a buffer stage has more tolerance.

Not the answer you're looking for? Browse other questions tagged microcontroller mosfet-driver pmos high-side p-channel or ask your own question.

1
Can you drive a MOSFET directly from a microcontroller?

0
High-side switch Vs Complete mosfet push-pull configuration to drive an inductive load
0
MOSFET 24V high-side switch
0
High side mosfet 12V switch from isolated 3V3 GPIO always ON
0
Can I use this low side rated MOSFET driver to drive a high-side PMOS?
1
How to "drive" a gate drive transformer from complementary PWM outputs of a microcontroller?
2
Wouldn't using two MOSFETs in push-pull configuration to drive a single MOSFET be counter-productive?
9
Can I drive a low-voltage MOSFET gate directly from a microcontroller?