What on a digital PCB could affect the boost converter output?

I have designed a fixed 12 volt boost converter module and it works.

I tried to implement the same booster on my project PCB, but with all same components it can't provide 12 volts when it gets any load at output. I tried to bypass the onboard boost converter and attached the module I designed (same mentioned first) and it works with load too.

All the components as well as trace's width seem to be capable of handling the load. I tried to find what is different but I could not see anything.

Now the only thing left is isolation. Is it possible that some traces in my PCB can cause problem here? All boost converter components are on top layer but on bottom layer there is dome switch mounted on the PCB and another power grid along with data lines. The inductor I used is not shielded.

The schematic and PCB for the boost converter part is below. I used an MT3608 IC, the capacitor on input output is 22uF. Inductor part number CD54NP-330LC 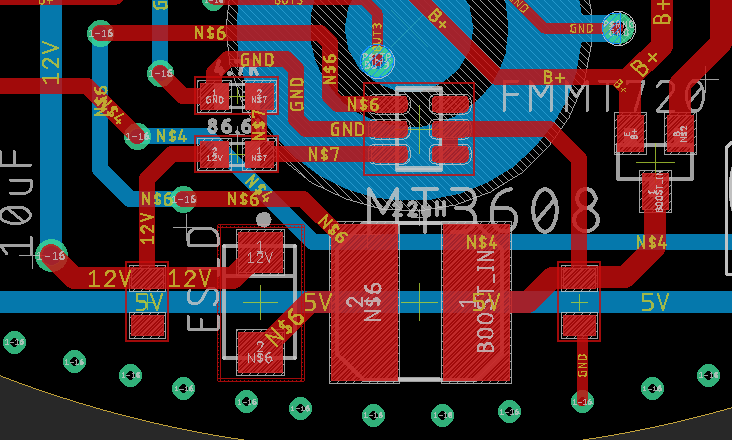 Here is a fragment from the datasheet you should have followed. As you can see, your PCB looks like someone was intentionally using every single recommendation backwards. Especially that pin 1 trace is outrageous. I suggest throwing your existing design out and starting from scratch.

One piece of advice that might help - don't rush to place components and start tracing. First, rotate and move components around to minimize rat's nest length as much as possible, and to reduce intersections - all the while keeping in mind specific requirements for important traces. 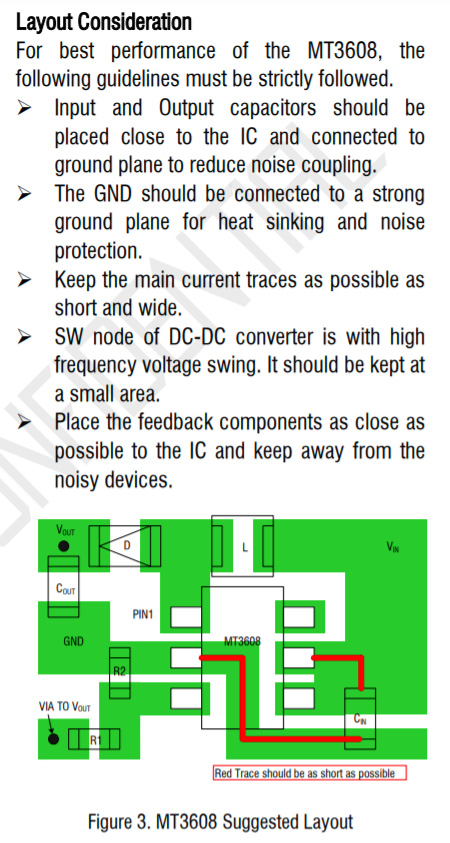 Note that while the layout suggested in the datasheet follows most of the rules, it is far from optimal. By placing components closer and with a bit of rotation here and there most of the traces can be shortened at least in half. The capacitors should be moved closer to the regulator pins (rules #1 and #3) and thermal VIAs added to GND (rule #2). Here is an example of such a rearrangement: 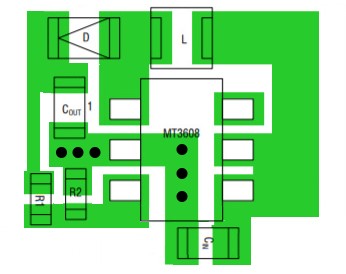 Another piece of advice, specific for power applications, is to keep in mind that CAD systems limit maximum possible trace width by local pin clearances. So, after making all required connections you have to supplement them with copper zones for current capacity and thermal dissipation. Alternatively, you can make all connections with copper zones only, making sure you switch their thermal clearance off.

Finally, as @Andyaka pointed out, the inductor you've used is not suitable. Again, it's as if somebody took the datasheet and did the opposite of what was written there. 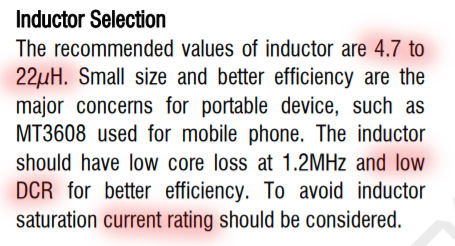 You have taken many liberties in this design especially on the layout but, I think a significant concern is something you inadvertently hinted at in the 2nd comment under the question: -

So, you expect an output current up to 500 mA. That's at 12 volts hence, the input current into the booster is going to be a lot more that 500 mA. You say this in another comment: -

Input Voltage is 3.7volts (cell supplied) and output should be 12Volts.

So, making the assumption that power out is 90% of power in, it seems like your input supply current from the 3.7 volt battery will be about 1.8 amps.

Then you say that the input to the booster is controlled by a transistor and I see an FMMT720 BJT where the collector feeds your boost circuit. From the FMMT720 data-sheet I see this graph and on it I've redlined where 1.8 amps occurs: - 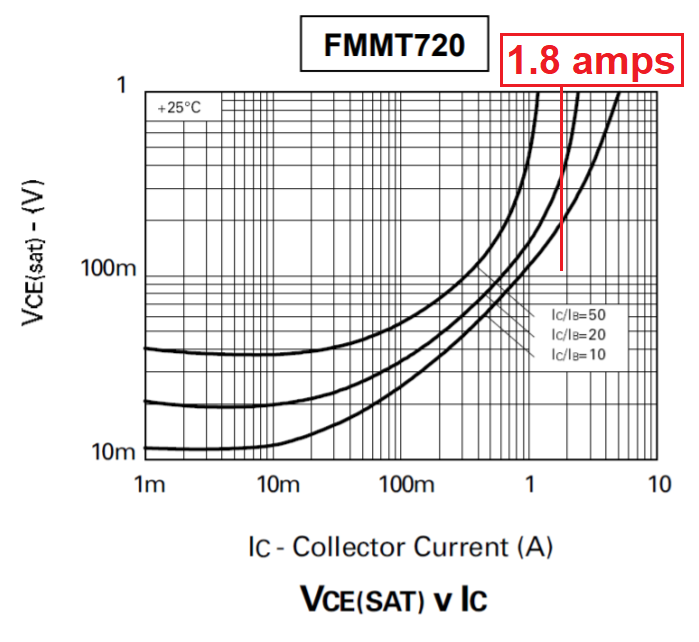 So, unless you are driving the base at a pretty good level the transistor will be dropping several hundred millivolts when supplying 1.8 amps. This means that the terminal voltage reaching your booster circuit is not 3.7 volts but maybe only 3.4 volts and that now means that your input current is required to be about 2 amps (to sustain the output load) and, that will drop even more voltage across the transistor and things will not end well (a downward spiral you could say).

But what about the inductor: - 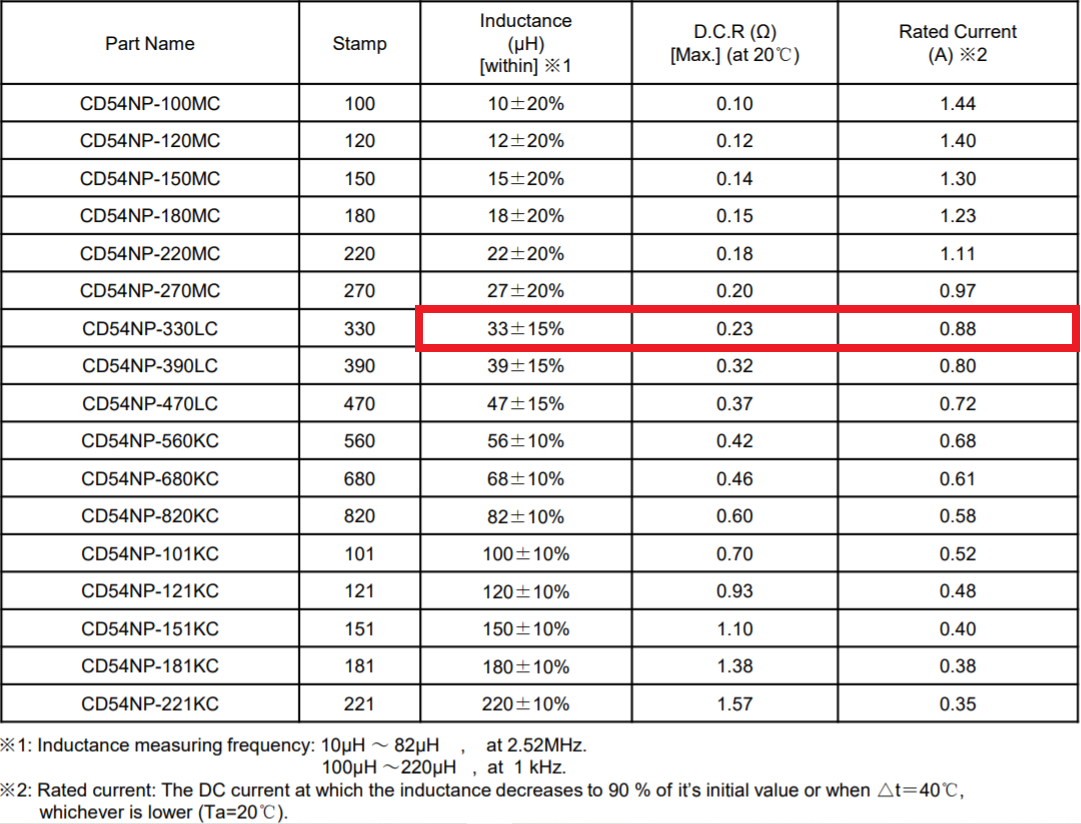 It's only rated at 0.88 amps and that's a lot less than 1.8 amps. In addition, there is the maximum DC resistance of 0.23 Ω to consider. OK it's a max value but, typically it might be 0.2 Ω and, with 1.8 amps flowing, the DC volt drop is 0.36 volts and that another reduction in the input supply voltage. You might be realistically operating with an effective input voltage of only 3.0 volts and that requires an input current of over 2.2 amps to be able to supply a load of 500 mA on the 12 volt output. And also, the data sheet for the chip says the recommended maximum inductor value is 22 μH; yours is 33 μH.

In my opinion, that ain't gonna happen.

It's a perfect storm of wrong components, miscalculation and terrible PCB layout.

Making the switching node long is to ask for trouble. Just look at how long the trace between IC pin-1 and the inductor is. You need to make this loop as small as possible. And you need to place the input capacitor(s) as close to the IC's input pin as possible.

Looking at the layout, I don't see any connection from the output capacitor (the one on bottom-left, right next to the big diode) to GND. Without any output capacitor, you can't get any regulated output when the output is loaded.

And you just kindly hid the GND pour for us to see the tracks clearly, didn't you? There's a proper GND pour, right?

I have redesigned the layout and changed the inductor to 22uH (shielded this time,) and it is working now. Attached layout design below if anyone is looking for a specific answer. 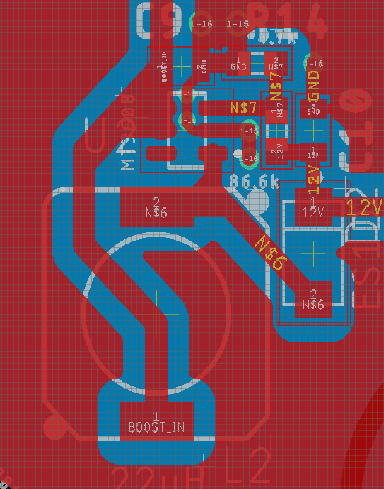 Not the answer you're looking for? Browse other questions tagged pcb-design dc-dc-converter boost inductance or ask your own question.