What is the difference between a linear regulator and an LDO

Can someone tell me what the difference between linear regulators and LDOs is?

From what I have read and understood, it is that linear regulators and LDOs don't use switching elements, but I think they are the same basically.

Is there something that I am missing to understand?

Non-LDO type regulators that use N-type transistors have an inevitable dead band of output voltages close to \$V_{in}\$ in that they simply cannot reach, because those high output voltages would require a control voltage on the pass transistor above \$V_{in}\$.

An LDO is a type of linear regulator.

Since the input-to-output differential is directly related to power loss (among other considerations), it's desirable to operate with as low a differential as possible. So the low-dropout (or LDO) linear regulator was invented. Initially, these had dropout voltages in the range of 1~2 volts (such as the LM1117 series), but that would hardly be considered "low" dropout today; modern LDOs can achieve dropout voltages of only a few hundred millivolts.

It's not recommended to use an LDO when you don't need one, though, as they tend to have poorer stability characteristics than standard linear regulators. A 78xx is typically stable no matter what as long as you give it adequate capacitance on the output, but a fancy LDO with only 100 mV of dropout may require the output capacitance be in a narrow range, and that capacitance needs to have high enough (but not too high) ESR to avoid oscillation. See this question for some more details on this.

A low drop out regulator (LDO) is a linear regulator.

Linear regulators control the output voltage by adjusting the current through an output transistor.

In all linear regulators, there is a minimum difference between the input voltage and the output voltage that you have to maintain.

Take the ancient 7805 linear regulator. It needs the input voltage to be at least 2V higher than the output voltage. You need at least 7V in to get 5V out of a 7805. 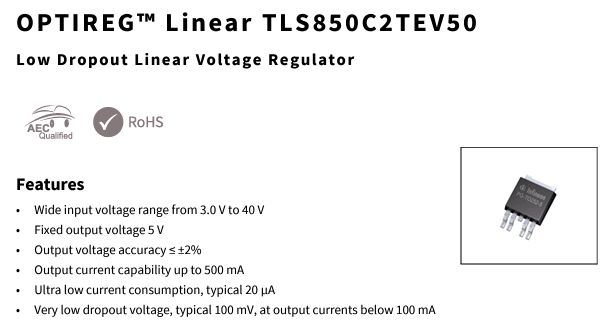 Both are linear regulators.

The 7805 is a linear regulator but not a low dropout regulator.

A low dropout regulator is a type of linear regulator where the drop out voltage is relatively low. For example, an LDO might require an input voltage only a few hundred millivolts above the output voltage, while a classic linear regulator like the 7805 requires at least 2 volts.

Not the answer you're looking for? Browse other questions tagged voltage current buck ldo linear-regulator or ask your own question.

8
What is a phase difference between voltage and current?
2
What is the maximum voltage drop on an LDO?
17
Why are low-dropout (LDO) voltage regulators unstable?
5
Types and regulation schemes LDOs
0
LDO, linear regulator or DCDC buck converter
4
Difference Between RMS noise and PSRR in an LDO
1
LDO vs Switching Voltage Regulator for Drone Application
7
What are the disadvantages of using a Zener diode over a linear voltage regulator?
0
LM317 / linear regulator, estimate of heat capacity
2
What is the difference between voltage regulators, resistors, and buck converters?