I have a lab for a circuits class and in it we are building an RC series circuit with a square wave input. I am using a function generator to produce a square wave at 50Hz, period = 20ms, Amp = 500mV, Offset = 500mV. I am to measure the output voltage across both the resistor and capacitor.

I have read some previous similar questions and applied some of the solutions found there to no avail, such as: I have checked for DC coupling and have verified the circuit is getting the input by using the O-scope to check the function generator output directly, as well as measuring the component voltage with a Fluke.
How do I get the capacitor to show starting at 0V and ramping to 1V?

Here is the input from the function generator: 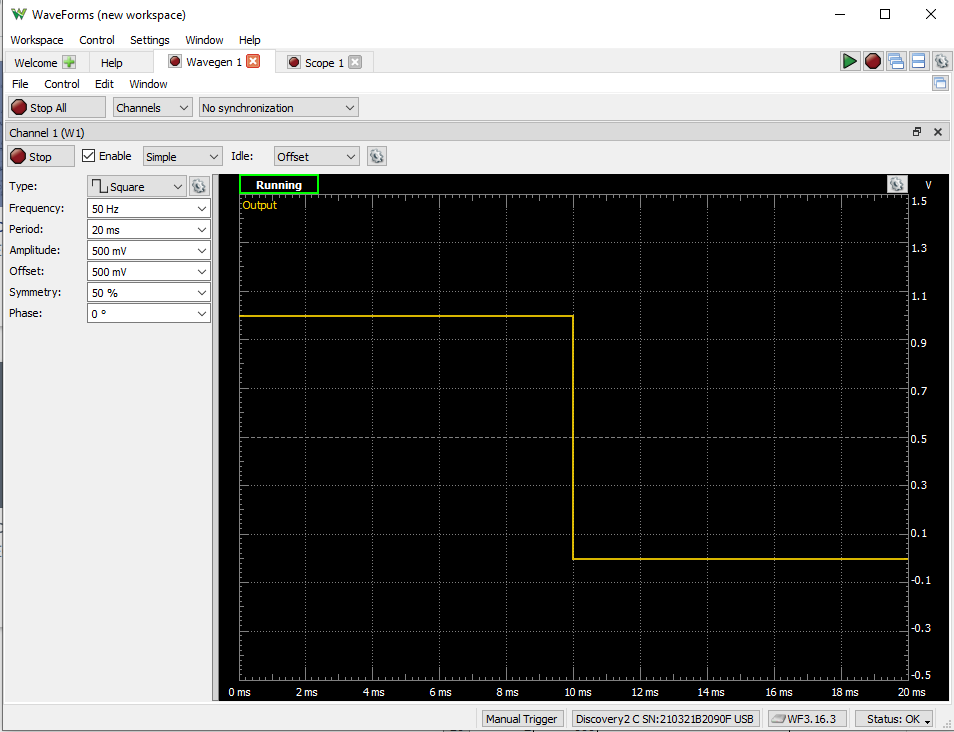 Here is the output measured by the O-scope: 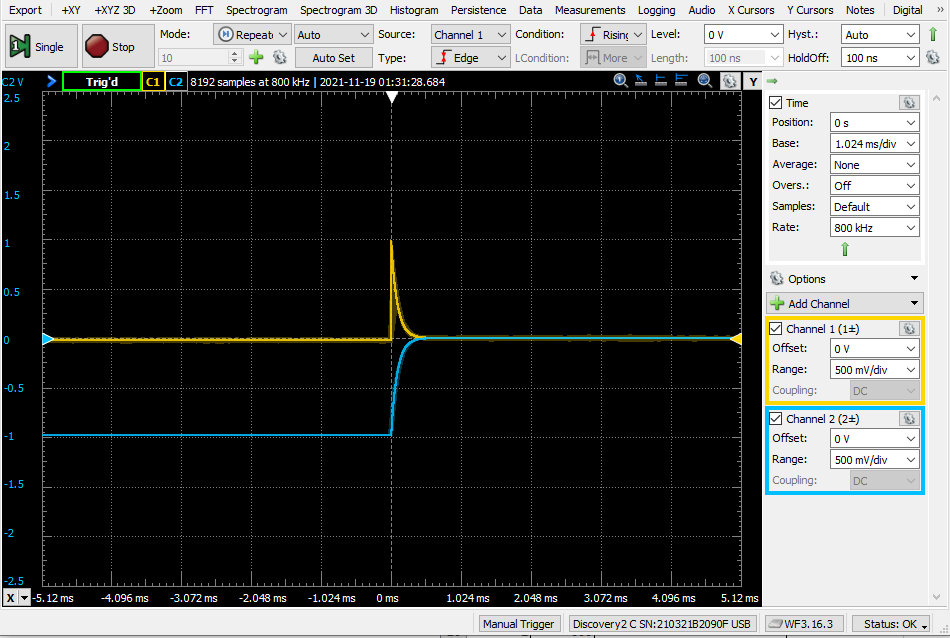 If I change the condition to falling edge, the waveforms overlap in a behavior mimicking what I anticipated, but goes from 0 to -1V, which I don't understand since the input voltage is never negative (and when changing the function generator input to a rising squarewave, the O-scope waverforms don't change). 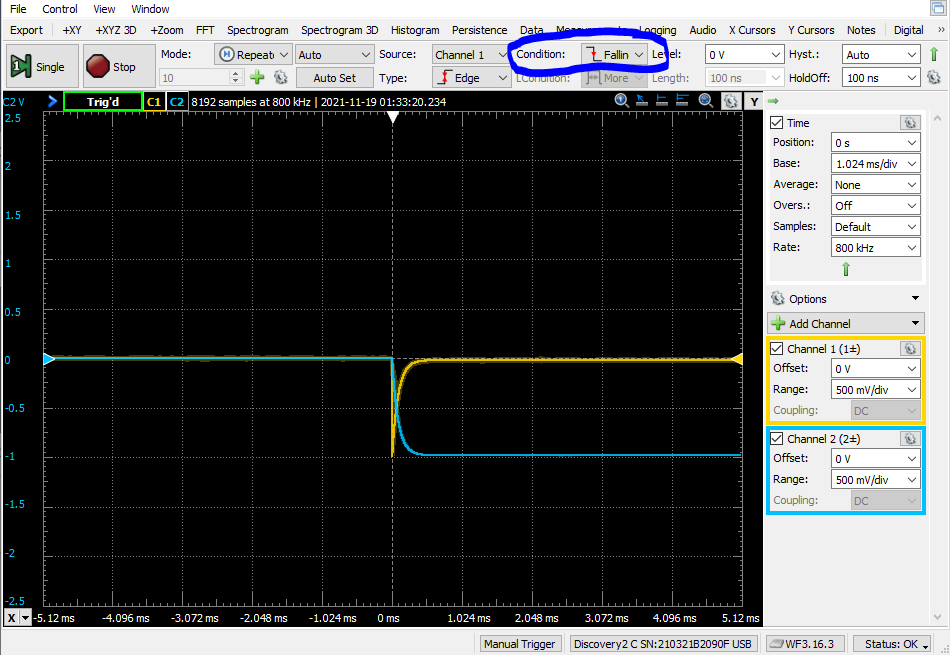 I am getting the resistor behaviour as expected, and the shape of the capacitor waveform is as expected, but starts at -1 V and ramps to 0V.

A different point-of-view...the capacitor starts at 0V before the square-wave edge occurs, rather than -1V. In this state, no current is flowing, since the voltage across the resistor is 0V as measured by the oscilloscope.

So naturally you ask, "where does the -1V transient come from when the square wave switches?". Just before the transient occurs, voltage across the resistor is 0V but the function generator output is at +1V. The capacitor is charged with the difference (it is charged with 1V): its function-generator-end is at +1V, while its resistor-end is at 0V.
Now the square wave edge occurs very fast, and the capacitor's function-generator-end drops from +1V to 0V. The capacitor's charge tries to dump by causing current to flow. This current path includes the 10k resistor, but it also includes the function generator's internal 50 ohm source resistance. Since 10k > 50 ohms, almost all of the 1V change appears across the 10k resistor...if you were to look very closely, you'd see that the resistor voltage drop is actually -0.995V.
From there, the transient exponential rise to 0V proceeds while the capacitor charge dumps out.

How do I get the capacitor to show starting at 0V and ramping to 1V?

OP's waveforms show that the oscilloscope trigger is from channel 1. Channel 2 is connected to function generator output, and should be the trigger source instead of channel 1.

When looking at the transient voltage across the resistor on channel 1, there are two transient directions (one going up, another going down). This is mightily confusing to the trigger slope direction (+/-).
If you trigger from the function generator waveform on channel 2, trigger edge direction is unambiguous, and you should have no trouble triggering on rising edge versus falling edge.

One other point...You might see on close inspection that function generator output is not entirely square-edged. This is caused by the 50-ohm internal resistance. This effect would be more apparent if you used a smaller load resistor than 10k.

Not the answer you're looking for? Browse other questions tagged circuit-analysis circuit-design oscilloscope waveform function-generator or ask your own question.

2
Error caused by Scope or Function Generator?
0
Impedance mismatch
1
HP8116A Function Generator Signal Problem
2
Peculiar noise when observing a square wave
0
Why does my O-scope show capacitor charge starting negative?
0
Unable to stabilize waveforms on oscilloscope
6
Why do I get 0 volt output when I have a voltage divider with a square wave input?