LTspice fails at a simple two-resistor voltage divider. How can I fix it?

During some simulations, I noticed some oddities and narrowed it down to the following problem: 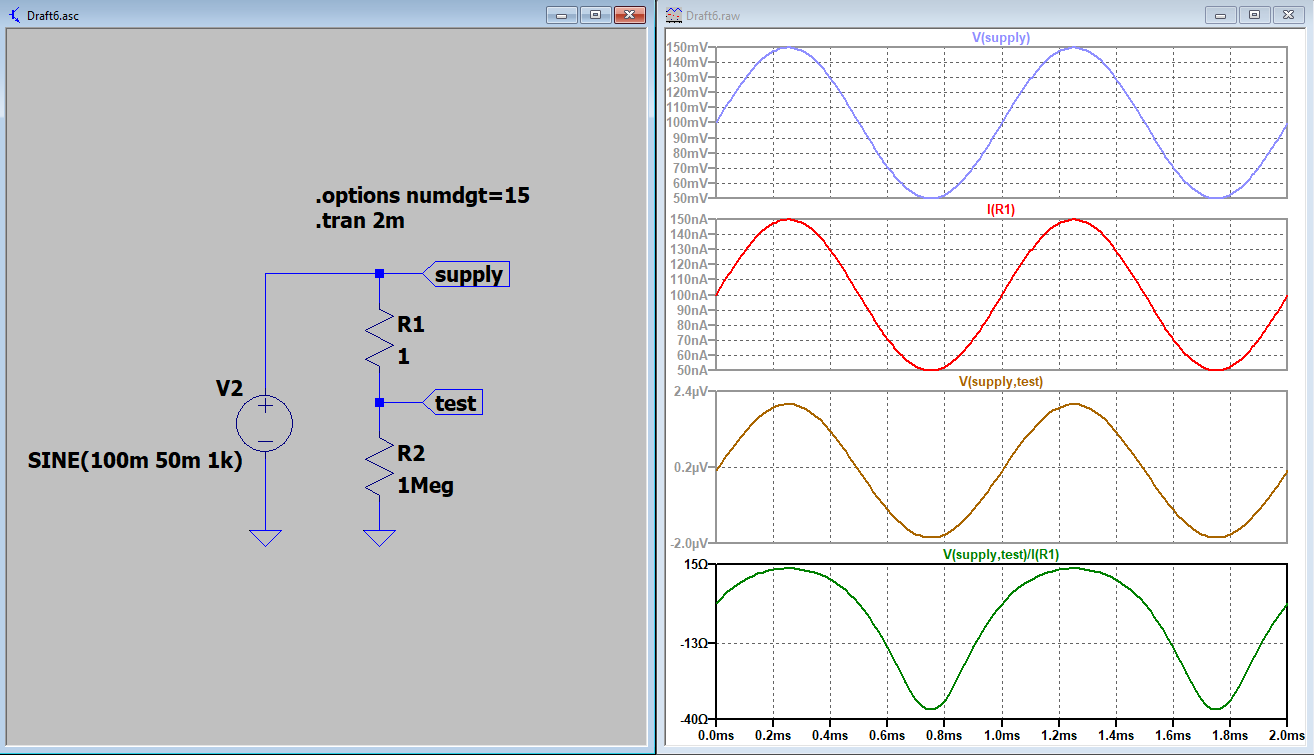 This is is simple voltage divider using two resistors. The four traces show:

I thought that this was a problem with limited precision, so I added the .options numdgt=15, but it didn't change anything. How can I get this right?

The problem is known and only happens in versions of LTspice XVII after May (or June? don't remember) 2019. It doesn't happen in version prior to that, or LTspice IV. If you add a VCVS across the 1 Ω resistor with the value of 1, you'll get the correct voltage.

I'll try to address at least a part of G36's comment.

What is certain: the modified trap is mostly a post-processing applied to the waveforms. If there are oscillations, they still exist as the solver finds them, but they are not displayed due to this post-processing.

If you use Gear or trapezoidal for the Default Integration method, things will compute as expected. You'll find this under the SPICE tab of the control panel. You still need to use double precision math (numdgt=15 setting).

Edit:
Since you asked about the differences in integration methods in LTspice, here is a posting in alt.sci.engineering by Mike Engelhardt (brains behind LTspice), 21 Feb 2004.

Integration Method Explained:
Gear, compared to trap, has the advantage that it is numerically more stable, but less accurate. In principle, it's better defined because Steven Gear even specifies when you change integration order and timestep size. PSpice is hard-wired to use Gear(well, the docs say it a proprietary algorithm, but it acts like Gear.) The inaccuracy of Gear comes from the fact it dampens the circuit. The amount of dampening decreases with decreasing step size.

Trapezoidal is faster and usually much more accurate. Occasionally it's not as numerically stable, especially when running non-physical circuits described with macro-models. It has the disadvantage that it can ring as a simulation artifact. This can be disconcerting to novice SPICE users. Most SPICE programs have some form of Trapezoidal integration as the default. There's fair bit of leeway in trap implementations, so I call them all affectionately cowboy integration.

Modified-trap is a proprietary algorithm that has the speed and accuracy of trap but precisely cancels traditional trap ringing. It is the most accurate method I know of.

If you're using LTspice, use the default of modified trap. Use trap and Gear only as diagnostics. Gear will let you duplicate some PSpice simulations. For example, if LTspice says a circuit is unstable but PSpice says it's stable, you can switch LTspice to use basically the same integration method of PSpice to duplicate it's erroneous results for diagnostic purposes. Switch to pure trap instead of Modified-trap if you want to see if your circuit is trap ringing. If the trap ringing that Modified- trap cancels is spread over several circuit nodes, then the cancellation might not work well. Using pure trap lets you investigate potential simulation artifacts.

Solvers Explained:
The alternate solver runs with about 1000x more internal accuracy in the sparse matrix package but at half the simulation speed. The advantage of it is that is solves certain convergence problems. Here's a simple deck that demonstrates that it's more accurate then the normal solver:

Node V(x) should be -6dB for all frequencies. However, the normal solver(and other other SPICE program) makes errors solving this matrix. If you switch to LTspice's alternate solver, you get close to the correct answer. The alternate solver was released on June 13, 2003 and was discussed in message number 434 of this group.

On Gear vs. Trap, here's a circuit that will illustrate that Gear is over-stable, that is, it incorrectly dampens the circuit in the interest of avoiding convergence problems:

(Mod-)Trap will give the correct answer, that is, that the current spike starts the tank ringing and the ringing then continues indefinitely. If you run that circuit in PSpice, it will only ring a few times. This over- stability of the Gear causes an error and is what makes many circuits converge in PSpice but not LTspice. PSpice is giving you the wrong answer.

Not the answer you're looking for? Browse other questions tagged ltspice voltage-divider or ask your own question.