I am trying to understand the concept of RMS value.

From whatever I have read and the tutorials I have seen, I have seen them derive the RMS value only considering the first positive half cycle of the periodic wave. Why is this?

Why don't they consider the second half cycle (which is either negative or decreasing to zero) while arriving at the RMS formula?

From whatever I have read and the tutorials I have seen, I have seen them derive the RMS value only considering the first positive half cycle of the periodic wave. Why is this?

Think of a periodic signal (e.g. sin wave) as a sequence of numbers. 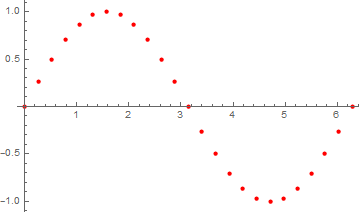 Why don't they consider the second half cycle (which is either negative or decreasing to zero) while arriving at the RMS formula?

But what if a phenomenon (such as an ac voltage) was useful in both directions and we still wanted to find its effectiveness. Clearly a simple average won't do in the presence of negative quantities. So the points are squared to make them positive, mean is calculated, and then it is squared (and read backwards to give us rms).

What about rms of {2,3,-5}: The rms would still be Sqrt[38/3) since the negative quantity would be squared turning it into a positive quantity.

You can do this calc this for a half cycle (and divide by \$\pi\$) to get the same result as the two halves are identical, but you can't do it for an asymmetric shaped signal.

Think of an AC voltage as a force that vibrates electrons (for instance) in either direction at 50 or 60 Hz (most common values). Energy is transferred through the wire and the electrons in the metal wire pretty much stay in the same place.

How much DC voltage would be required to get the same energy to transfer is going to be the rms value of the ac voltage.

Power is given by \$ P = I^2R = \frac {V^2} R \$ so it doesn't matter whether the sign is positive or negative as the square operation makes it positive. Therefore if the negative half-cycle is a mirror of the positive then you only need to calculate one of them.

You can take advantage of symmetry to simplify the calculations, but you don't have to. If you assume symmetry where there is none you'll get the wrong answer.

For example, for an ideal sine wave, there is no need to integrate over more than 1/4 cycle (starting at 0, say) when calculating RMS or the average of absolute value.

That's because the second 1/4 is just the first 1/4 running backward in time so the integral wrt time (the area under the curve) of the voltage or the voltage^2 is the same as the first.

The average is obviously zero for a sine wave with no offset since the area above and below zero is the same.

For a triangle wave, the RMS value is the same as for a sawtooth of the same peak voltage, for that reason. (Modified image from Chegg):

More generally, for an arbitrary periodic waveform, you only need calculate over a single cycle (though over multiple integral cycles should yield the same answer).

RMS value is the measure of how effective the waveform is in producing heat in a resistance. That is the total amount of energy it causes a resistance to dissipate.

Heating or energy dissipation doesn't depend upon the direction of current through it or upon the polarity of the voltage across it.

Therefore the advantage of RMS measure is that it eliminates any consideration of wave form polarity ND and the positive portion is not canceled by the negative portion.

The best way to understand what RMS mean is to use some math:

The average voltage takes this form:

On the other hand the RMS voltage takes this form:

It is easy two see that the average voltage isnt the same with the rms voltage.

If the load is resistive then the positive and negative half cycles won't cancel each other out because while the current is negative the voltage is also negative. Power = voltage * current, so the result will always be positive (negative * negative = positive).

However this may not be the case if the current and voltage are not 'in phase'. If during any part of the cycle the signs are different then the power is 'negative' (ie. coming out of the load rather than going into it).

With a purely inductive or capacitive load the phase difference is 90° and the total power over a full cycle is zero. The graph below (from here) shows the relationship between voltage, current, and power in an inductor. The waveforms for a capacitor are similar except that current leads voltage by 90° instead of lagging it by 90°. 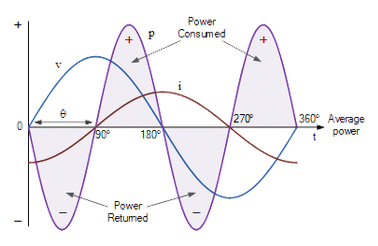 Put your left hand on the the positive terminal and your right hand on the negative terminal of an 800-volt Porsche Taycan battery. Now switch hands. The current flow through your now fibrillating heart went in different directions but the power, either (volts)(amps) or (-volts)(-amps) was the same. We can conclude that in terms of POWER the amplitude of the voltage (and resultant current) is what matters, not the sign (direction of current flow).

Regarding a sine wave, the first quarter of the cycle will yield all the information we need. The second quarter is symmetric to the first--the potential to produce power is the same. We have already concluded that the negative half of the cycle yields the same power potential as the positive half.

Now, regarding AC and Vrms vs Vavg and Vpeak for that matter, it depends on what you are calculating. If you need to design insulation for a wire, you should probably be concerned with Vpeak. But for the vast majority of electrical problems we want to talk POWER—making things go and glow.

To make thinks simple on the engineering side we have decided that we want 100 volts AC and 100 volts DC to heat a common resistor to the same temperature. A worthy goal. The rms formula gives us the "corrected" AC voltage to do that given an AC waveform with a given Vpeak. Let us now derive the Vrms formula so we will have an AC voltage to use in our DC-equivalent AC power calculations.

Power is a function of the square of the voltage (V=IR —> I=V/R; Power=VI and substituting for I, Power=V²/R). So, we need to find the voltage squared to find power. Finding the square of a DC voltage is easy. How do we find the square of a voltage changing as a sine wave. To begin, you chop up the sine wave into slices and square the voltage at each slice. Graphically, you can take each voltage slice and draw it as a square shooting out into the z-axis. Add up all the square areas, then divide by the number of squares. That gives you the average square area (mean of the squares) for the sine wave. Now we take the square root of the newly found average square area to get the length of the edge—the voltage—that produces it. And that is, in simplified graphical terms, the Vrms formula. 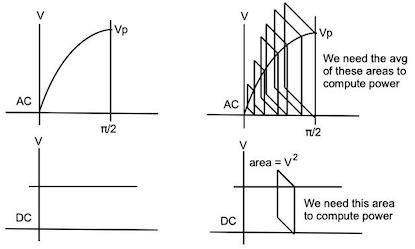 Not the answer you're looking for? Browse other questions tagged voltage circuit-analysis current ac sine or ask your own question.

0
How to calculate the pulsating current flowing through a shunt resistor?

3
Why use RMS instead of the average voltage of half the cycle for power
0
RMS of an inverted sine wave
2
When to consider Peak current/voltage vs. RMS current/voltage and vice versa
0
Is the peak-to-peak voltage the same as the peak voltage in rectified voltage?
0
Synonym for Sine Wave Half Cycle
3
Voltage and current during the first cycle of RL circuit
2
Which theory do oscilloscopes or multimeters follow to measure RMS value?