Do boost converters have a minimum Vin/Vout difference? 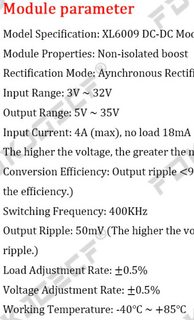 If you look at the basic circuit of a boost converter, you'll see that the output connects to the incoming voltage via a diode so, if the MOSFET switch did nothing, the output would be roughly tied to the input voltage but about 0.7 volts lower. That sets the baseline for basic boost converters. If you need a slightly higher output voltage than input minus 0.7 volts then the MOSFET is called into action to store energy in the inductor that is cyclically transferred to the output. So, theoretically, with a very fine pulse on the MOSFET , you could start to raise the output to voltages slightly higher than input voltage minus 0.7 volts. Theoretically you could arrange for the output to equal the input voltage and be reasonably regulated but, it will be susceptible to input line noise. If you can live with that then, that's the lower limit.

Of course, the devil will be in the detail in many commercial offerings and some will just about regulate to equal input and output voltage and, some won't.

It depends on the chip and circuit, but at least the XL6009 chip has no such limit, as it can be used to build a buck-boost regulator, so output voltage can be lower than input voltage.

Yes, a boost converter has limitations.

What happens in a boost converter is that an inductor is charged (on-State). And that stored energy is then tranferred to the output (Off-State). 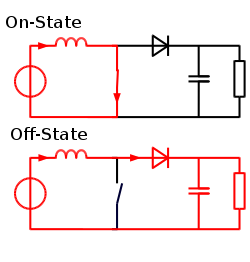 We could "solve" that by using a smaller inductor value but that increases the current (it has to, how else can we get more energy from the same small input voltage?).

Also, there will be a maximum current, see the "Input Current: 4A (max)" in the datasheet of that XL6009. That means that you must use an inductor that has a large enough value to ensure that this 4 A limit is not reached.

These factors limit the amount of power we can convert to a higher output voltage.

If the output is not loaded or loaded with a small current, the amount of energy is small and the things I describe above are not an issue. The converter will work as expected.

However, if we load the converter and it has to deliver more energy to the output, the issues will become important. At some point, the inductor cannot transfer enough energy from input to output and then we will hit the limit of what the converter can do.

If we hit that limit we can "back away" from that by:

These boost specs imply that Vout>Vin +2V just as for buck your comment says,"Vin must be at least 1.5V higher than Vout".

For Buck-Boost regulators there is only a range limitation, however efficiency drops up to 10% when Vout-Vin <1 V for some designs. I verified this using my lab supply which displays V,I,&W for a 20W 12V LED for automotive spot light (very bright) and computing input power to LED around 12V while brightness remained constant but power increased during crossover, then remained constant over a wide automotive voltage range.

Not the answer you're looking for? Browse other questions tagged voltage-regulator boost or ask your own question.

6
How step-down voltage regulators behave when their input drops below their output voltage?
2
What is the minimum supply voltage for the MC34063E in step-up (boost) configuration?
3
Buck/Boost Converters-- What's the 'cost'?
2
How to achieve the max efficiency from a Buck converter
6
Vin: 2-36, Vout: 4.2. Should I use step-up, followed by step-down, or SEPIC?
6
Behavior of Boost and Buck Converters
1
Are there any caveats to running a boost converter at zero duty cycle?
12
Why are boost/buck converters never fully integrated/all-in-one?
1
„Power circle“ - first buck then boost for converter testing