For an electrochemical etching process I am trying to put together a battery powered, somewhat accurate current source able to provide 1mA to 5mA to a load with a varying resistance. (to be specific, it should be able to switch between 1mA, 2mA and 5mA to a load that is less than a few kΩ.)

The idea I had was to control the current through an NPN transistor using a low-pass filtered PWM signal from a microcontroller: 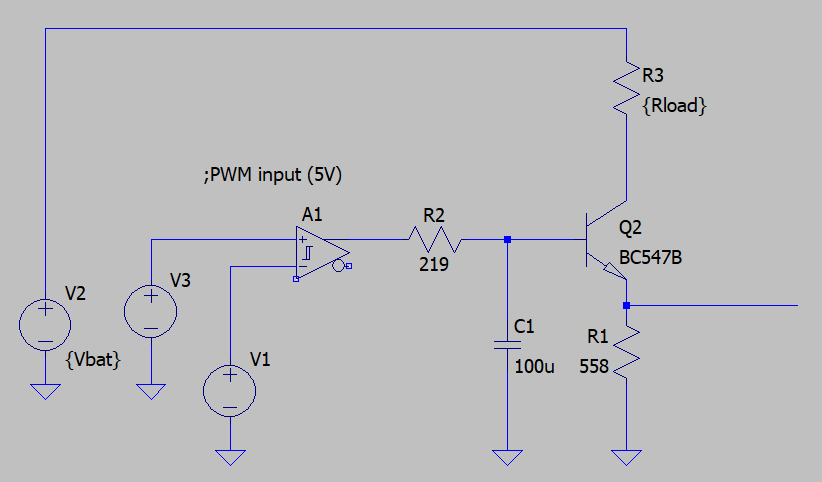 The values are chosen based on what I had lying around, making sure that the time constant of the low-pass filter is large enough to reduce the ripple somewhat, and R1 limits the output current to about 6mA. This results in the following simulated output current (red) when the duty cycle (blue) is swept from 0% to 100%:

The use of a microcontroller is convenient as I can show the measured current on a display without having to include a complete multimeter in the setup. Additionally it means I can switch between the target currents with a single button rather than having to use something like a potmeter to adjust the current with less precision.

After implementing this circuit though I ran into something unexpected. The PI control works well and quickly settles on the PWM where the calculated current through R1 is equal to the target current. If I use a multimeter to measure the current through R1 this also matches.

However, if I measure the current in series with the load I measure a current that is about 20% to 30% lower for all current settings. I am using a 220Ω load and the 5V microcontroller supply voltage as Vbat for testing. This supply should be sufficient to drive this load according to the previous plot which uses these parameters.

What could be the problem here? Did I overlook anything in the design? Is my multimeter at fault? :)

Thanks for any insights provided.

Here's where the problem is. Your base current in driving the BJT transistor into saturation is going to be a significant part of the current flowing through the emitter resistor. So, what you measure across that emitter sense resistor is true load current plus base current. If you chose a linear circuit using an opamp, the base current would be much less (maybe 0.5% instead of 5%).

You mention a deficit of 20% to 30% and that doesn't surprise me either.

After discussion with the op on this and that, I suggested that emitter and collector pins of the transistor be rechecked because if he had placed the transistor incorrectly in the circuit, it would still work but with a significantly reduced beta value. This seems to be what actually happened.

So, when a person (like me) diagnoses a transistor saturation problem based on apparently poor beta (too much base current), it isn't wise to jump all over my answer and down-vote it because it might not appear to fit your limited scope of knowledge. In doing so you totally run the risk of the op not getting the help they truly deserve. Take note.

This is the simple current source with opamp + yours transistor + yours shunt resistor.

The blue line is the setpoint (Iset=V/548) and the green line is the current through the load resistor.

To deal with the circuit you built, there are a couple of problems with both the design and performing measurements on it.

The good: The circuit as shown would operate.

Update: Added a very simple simulation (Square wave input ie 50% duty cycle) where the transistor can never be in saturation. You can see from this that the HFE of the BC547B is around 300. The Emitter current about 3.2mA and the Base current about 10uA. You don't even need to run the simulator ...if you open the schematic and hover over Q1 it will describe the DC conditions and show the Base, Emitter and Collector currents/voltages. 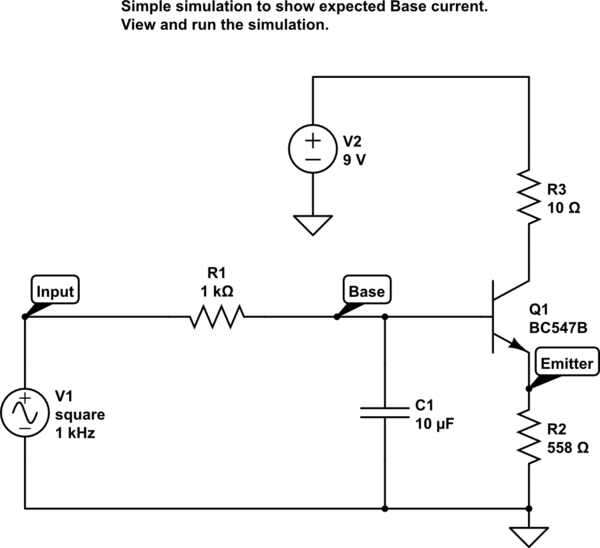 Not the answer you're looking for? Browse other questions tagged microcontroller pwm constant-current or ask your own question.

2
Variable Voltage Using PWM and Low Pass Filter
1
How to calculate PWM duty cycles for Solenoid current control
3
Is it OK to PWM a current source?
2
How does PWM generate an analog signal?
2
Is there a way to use Arduino PWM signal to supply a varying large current through a restive heating element?
2
how to measure current of high voltage 150Hz pwm signal?