Why do we need to use transmission line theory?

I just started to learn transmission line theory. I'm still confused about a lot of things.

Every source says that we need to use transmission line theory when the length of the wire is 1/4 or longer than the wavelength of the sine wave; some sources use a different number than 1/4. My question, that no one addresses, is: why does that exactly matter?

Why do reflections happen only when the wire is that length?

Is it true that every wire is considered a transmission line, but we ignore this effect when its length is shorter than 1/4 of the wavelength?

If the answer is yes, does that mean we can technically use transmission line theory and terminations for circuits whose wires are shorter than 1/4 of the wavelength without affecting them?

Why do reflections happen only when the wire is at that length?

Reflections always happen, it's just that when the line is really short compared to the frequencies involved the effect of the reflections become more and more as if the line were purely capacitive or inductive. Where it really starts to matter depends on the the circumstances of the circuit, and, to some extent, the attitudes and methodologies of the circuit designers.

I'd peg the "need to start thinking about it" threshold at around \$\frac{1}{10}\lambda\$; I'd consider \$\frac{1}{4}\lambda\$ to be the point where it becomes imperative to pay attention to transmission line effects.

And the frequencies involved aren't always obvious. As a for-instance, the first time that I got bitten by transmission line effects with digital circuitry involved a clock line to a 74HCxxx part; the clock line was somewhere between six inches and a foot (I can't remember), but coupled with no line termination at all, it meant that my part was seeing multiple clock pulses. Based on the length of the line, that means that my part was responding to a "clock" at between 500MHz and 1GHz. The actual clock was much less, but 74HC logic puts out really sharp clock edges, which mean there was enough energy at 500MHz that when the un-terminated transmission line was excited by that square edge, the ringing was enough to clock the receiving chip.

Reflections always happen. They are basically the mechanism causality uses (nothing happens instantly) for different parts of the circuit to communicate with each other in order to agree on an equilibrium.

For digital, if connections are shorter, the distance that the reflections need to travel is shorter which means the time required to settle is shorter. The faster everything settles, the less likely it is to disrupt your signal.

But as your connection gets shorter, you can get away with operating at increasingly higher frequencies without particular worry.

For analog, there is no such thing as settling time in analog. Any disturbance is a disturbance that will be picked up, because analog. In that case the threshold where you care is when the line length being long enough that it can contain enough of the sine wave going down it to cause the signal on one end is drastically different than the signal on the other end. For a given line length, this will happen earlier at higher shorter wavelengths/higher frequencies so the highest frequency component in your analog signal relative to trace length determines when you need to care.

Also, the transmission line itself carries energy. Longer transmission lines carry more energy and so spikes due to reflections are also more powerful and can cause damage. It's like having the mass of only a little bit of water flowing down a pipe versus the mass of all the water in a very long pipe. One has much more inertia than the other and if it encounters a discontinuity it is carrying more energy behind it and can cause more damage (water hammer).

Everything is a transmission line and reflections happen. However if the rise/fall time is slow compared to the round-trip time, the artifacts caused by reflections vanish.

This article on reflections contains this image: 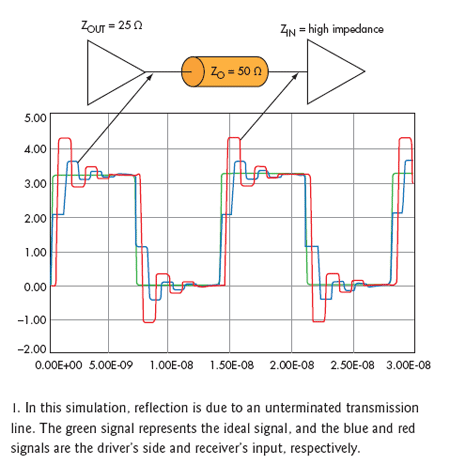 Note the plateaus and the vertical steps in between. The steps have a finite slew time. If the line is short, the round-trip time (the plateaus) become shorter as well. Once the plateaus are shorter than the slew phases, the different voltage levels basically mix adding up to nothing.

A similar effect is caused by large series resistors at the driver. They slow down the rise time so much, that the reflection arrives before the initial slope at the driver has finished. The result is a gradual voltage increase.

Now for sinusoidal signals, the first thing to note is that when you add multiple sines each with random phase and amplitude but same frequency, the result will be again a sine wave with the same frequency. As the receiver will see an addition of infinitely many phase shifted sine wave images of the original signal, the situation can be simplified by saying that the receiver will obtain a sine wave, which will have the same frequency as the original sine wave, but a shifted phase and slightly reduced amplitude. The amplitude is reduced because the images do not all add up in-phase.

The phase shift will be minimal when the line is properly terminated; it will be one propagation delay. The amplitude will be equal to the original for the terminated case, because only a single image will be received. The more mismatched the line is, the longer the receiver phase delay because the mean delay of all received wave images will be several propagation delays. In addition, due to the phase shift of the images, the amplitude will be reduced.

Is it true that every wire is considered a transmission line, but we ignore this effect when its length is shorter than 1/4 of the wavelength?

Yes. Some people may say less than 1/4 wavelength, but still the basic answer is "yes."

If the answer is yes, does that mean we can technically use transmission line theory and terminations for circuits whose wires are shorter than 1/4 of the wavelength without affecting them?

Yes. Note: it is not always necessary to terminate a transmission line, even if it is > 1/4 wavelengths long. Sometimes the reflections do not cause any problem for you.

Here is a "visual" for "choice" of transmission line theory.

I have made a simulation with a line (Td=1us, freq -> 1Meg) and varying load and varying internal impedance of generator.

Not the answer you're looking for? Browse other questions tagged rf analog transmission-line microwave or ask your own question.