Electric field in a circuit and potential drop 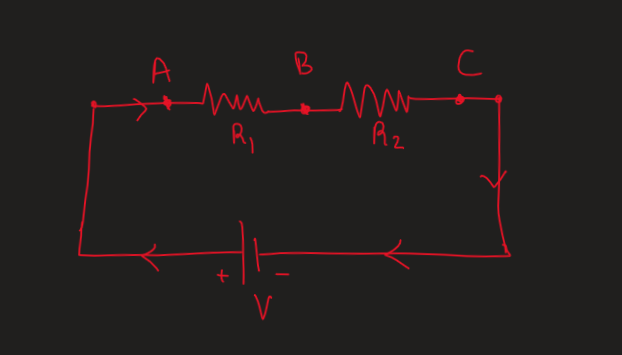 With reference to the above image:
Here the battery produces a constant (will it be constant? pl. explain) electric field across the length of the wire, lets say its value is \$\vec E\$ . This field exerts a force on the electrons in the wire and they start moving from higher potential to lower potential.

First of all what will be the value of this constant electric field (if it is so?). Will it be \$ |E| = \frac{\Delta V}{\Delta r}\$ where \$\Delta r\$ is the length of the whole wire across the circuit (including resistances)?

Please explain all these ?

Here the battery produces a constant (will it be constant? pl. explain) electric field across the length of the wire,

where \$\vec{j}\$ is the current density and \$\sigma\$ is the conductivity. Only if the ratio of these two terms is uniform, for example in a uniform wire, will the electric field be uniform. This is unlikely in a circuit with lumped components.

This is a very good approximation. The voltage drop in the wire between the battery and resistor will be small. But it is not exactly true. The voltage drop will be non-zero. It depends on the resistance of the wire and the current flowing through it.

No, the electric field will follow the microscopic version of Ohm's law given above.

Not the answer you're looking for? Browse other questions tagged voltage circuit-analysis current resistance electric-field or ask your own question.