How much data could be stored on a standard compact cassette using modern encoding?

My father and I recently dug out his old Commodore 64 from his basement and tried to revive it. Among other accessories, we also found his old Datasette drive, which is essentially a normal tape drive that can be connected to the computer to store and load data on a standard compact cassette. With a so called "Turbo tape" program, we can store about 3 MB of data on a 90 minute tape (estimated, I haven't tested it for a full tape because the Commodore 64 only has 64KB of RAM), so about 600 B/s. This number seems really small considering that a compact cassette of that type can store 90 minutes of relatively high fidelity analog audio. From Wikipedia I've found out that this is probably due to the fact that this drive used extremely simplistic encoding and a very primitive error correction scheme.

Now, this begs a question which I haven't been able to find an answer for searching the web: How much data could we theoretically store without errors on a compact cassette with more complex, modern encoding schemes like QAM/PKS and modern error correction like Reed-Solomon codes? Have there been any projects trying to explore that?

Furthermore, a more general question: Given an analog medium of known signal to noise ratio and frequency response, how can one even calculate (or approximate) the maximum digital data rate that can be written to it?

And just to be clear, I'm not talking about the Commodore 64 here. It was just the reason this question occured to me in the first place. So please don't vote to close this question or move it to retrocomputing. I'm asking about what modern technology could achieve with compact cassettes, not a 40 year old 8-bit computer. This is a perfectly valid electrical engineering question (though it might have some connection to the DSP forum as well).

Have there been any projects trying to explore that? 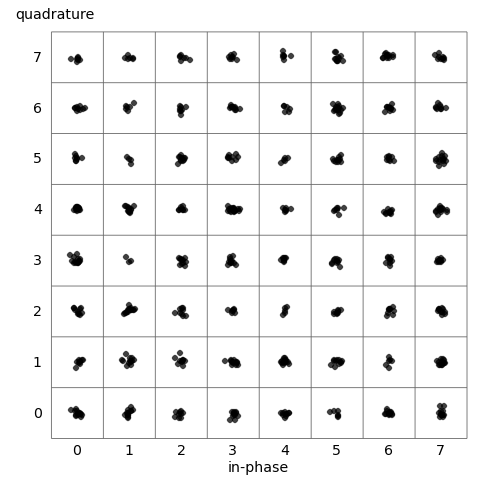 Then he tried recording to an actual cassette tape in an NAD 6220, and playing it back with a Sony WM-EX194. The results were in his words 'disastrous'. Limited bandwidth, amplitude variations, flutter, phase noise and varying motor speed all conspired to make the signal unreadable.

To compensate for speed variations he recorded a pilot tone to one channel and used Barker codes to correlate it to the data channel. Using this technique he managed to get ~24kbps with a 2% symbol error rate. The received constellation looked like this:- 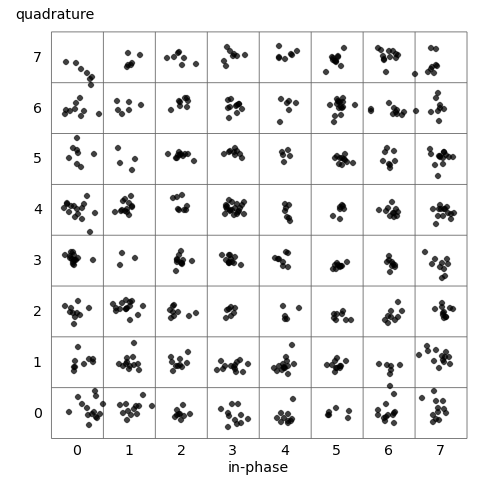 Better results could be achieved using a dedicated machine optimized for the job, perhaps including a tape head with more tracks. Here's an example from 1987 that achieved 60kbps using an 8 track head with the two outer tracks providing control pulses. An advantage of this system is that it automatically compensates for tape head azimuth alignment errors, which was a common problem for distribution of prerecorded computer tapes.

Given an analog medium of known signal to noise ratio and frequency response, how can one even calculate (or approximate) the maximum digital data rate that can be written to it?

Yes. The field of information theory is to a large part based on the Shannon channel capacity theorem, which gives the ultimate bit rate that can be achieved given SNR and frequency response.

How much data could we theoretically store without errors on a compact cassette with more complex, modern encoding schemes like QAM/PKS and modern error correction like Reed-Solomon codes?

One of the "fun" things about information theory is that you can never go to your boss and promise zero errors -- you can only promise a given upper bound on the probability of error, and then only if you make assumptions about the medium.

But, yes, some more modern system could probably enjoy vastly increased performance. In the end you may end up with something like extensive forward error correction stacked on top of an underlying modulation scheme that is very similar to a telephone modem protocol but that uses the available bandwidth on the tape.

At a guess, at least the audio bandwidth in bits per second, so maybe 10kbps. Probably way more.

At the level of individual magnetic grains, magnetic recording media are fundamentally binary. So the highest areal bit density is directly given by the grain density per area.

This assumes that each grain can hold its own magnetic state independent of its neighbor.

This is the case e.g. for modern hard drive media but I am not sure if old analog tape is designed that way.

If not, the density will be somewhat lower but it is impossible to answer without knowing the material specifics of the magnetic layer.

After a quick search around the net, it looks like you could count on 50 dB SNR up to 15 kHz or better.

That seems unlikely, but if you trust the lying specs, then channel capacity is about 200 kbps. We can get arbitrarily close to channel capacity with practical encoding methods these days, so that would be my guess.

200 kbps seems reasonable, given that we could do 56 kbps over dial-up. Cassette tape has improved bandwidth and encoding techniques are much better.

That would be 400 kbps if you used stereo.

On second thought... Audio recorded to cassette is superimposed on an AC bias with frequency of at least 60 kHz. The hardware must therefore be able to reproduce frequencies well above this.

Furthermore, the bias is there to overcome the non-linear nature of the recording medium, and there really is a limit to how well you can expect this to work. Even so, good decks claimed better than the 50 dB SNR I mention above.

I think a good digital recording system for cassettes would modulate that bias signal directly at >= 120 ksamples/sec, modelling the non-linear effects between samples. The channel capacity then becomes a measure of how many different levels you can distinguish with reasonable reliability. 16 levels should be doable, at least, which would be 480 kbps per track.

1 Mbps using stereo hardware should be possible if you bypass the audio processing like this, and modulate the heads directly.

Not the answer you're looking for? Browse other questions tagged analog signal-processing modulation data encoding or ask your own question.

1
Convert MP3 recording of data casette to serial data
1
To what extent does an ADC solve noise along an analog circuit?
0
Design Question: 20 MS/s data acquisition
0
Using cheap RF module encoding with UART in a commercial product
3
How difficult is it to build a device that can read credit card data from the mag-stripe...from scratch?
1
Modulation ideas for old and long analog bus cabling
1
Does computer memory record the zero binary state?
1
Understanding an unknown digital encoding
2
What are the correct frame control bytes in IEEE 802.15.4 standard data frame encoding for using 32 bit addressing?