Low performance in the MC34063 chip. Wrong BJT voltages, out of spec timings - how not to trust a datasheet

EDIT at the bottom.

Referring to a previous question which I solved, it was related to a inverting boost configuration of the MC34063 with the following arrangement:

I realized my circuit and calculations were right, and the question was solved. What remained open, though, was another issue: why from the measurements the Vsat of the internal switch was 1.6V or so, while by following the components selection, it should still be in the range of less than 0.5V (from datasheet).

To recap the component selection:

I had the correct 50mA at the minimum input voltage of 6.5V, obtainable from the following formula:

My question is why the chip keeps an on/off time ratio close to the minimum in the datasheet with all the 6 parts I tried, and why the Vsat is so high (way out of spec).

This is the scope acquisition of the pin 3 on channel 1 (timing capacitor) and the pin 2 on channel 2: 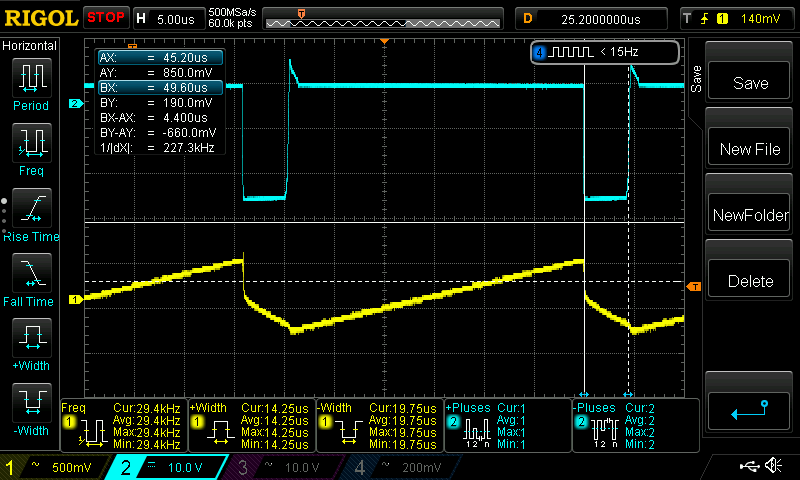 And here on channel 2 and 4 are, respectively, the pin 2 and the pin 1 (shorted with 7 and 8), showing the input voltage at around 6.5V (on the acquisition is lower at 6.1V though...), and during on-time the inductor voltage is around 4.5V, see acquisition: 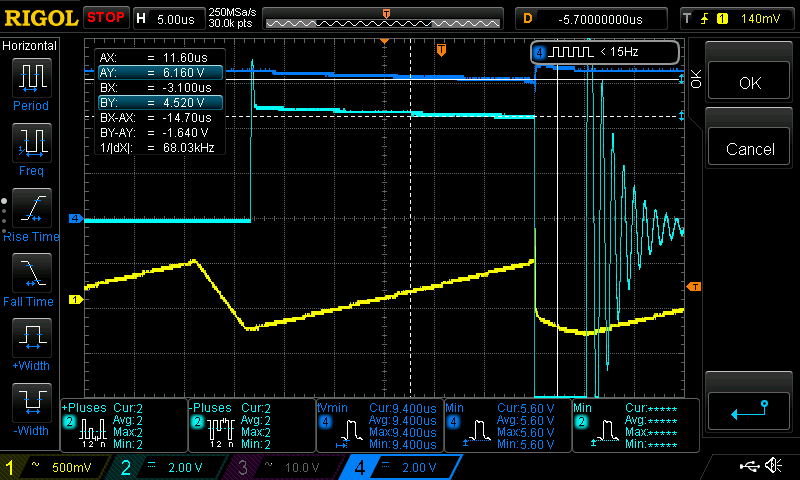 The acquisition is taken with a light load, as you can see the inductor current goes to zero and voltage oscillate at a certain resonant frequency before decaying to zero.

Is there anything obvious here? 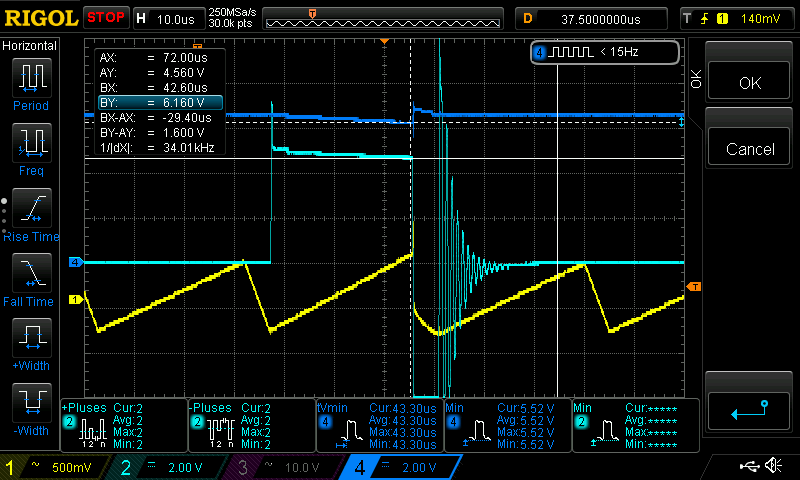 The natural ringing of the oscillator now shows that there is no fundamental error in my setup/calibration.

The open question, considering the observations I received of the Vce_sat, is the following:

I just wonder if someone else had a similar issue with similar specs. I am using a PCB I designed. As I have no problems in posting the grounding of the top of the test board I made (the bottom is just an entire GND plane), and also a 3D view, I hope I can provide some more insights now:

Also, the effectively mounted component, are the one shown in the initial schematic. 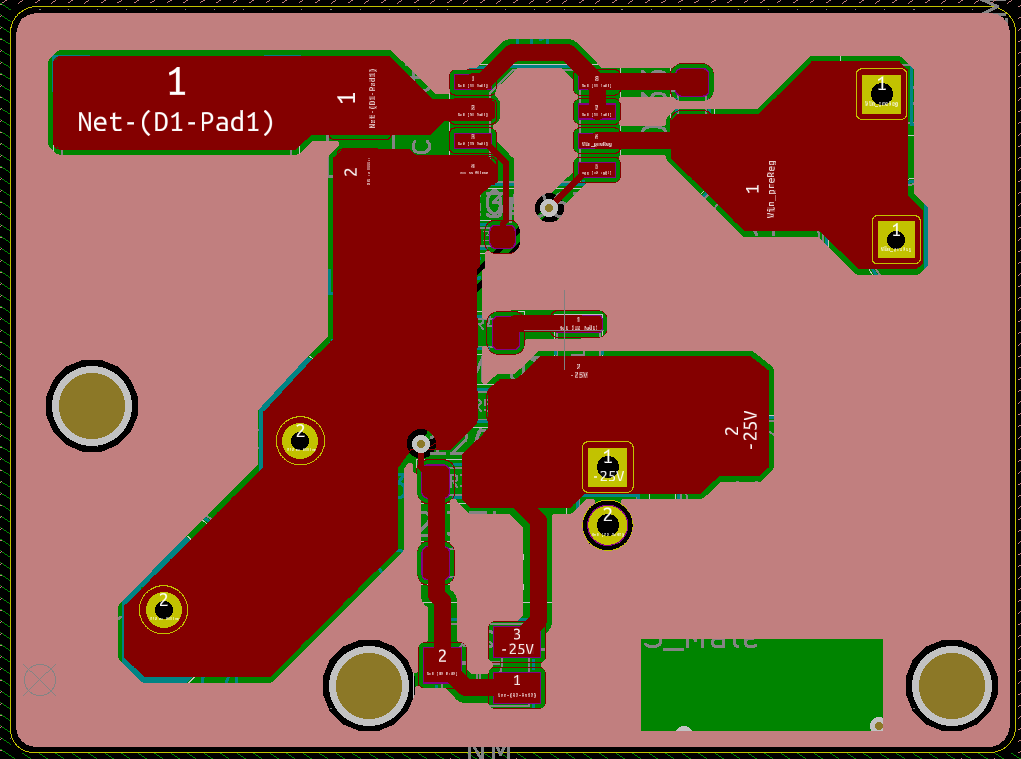 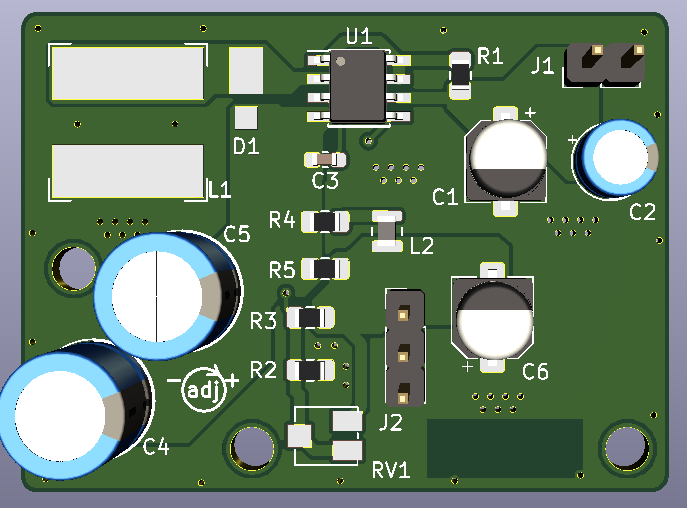 A short verification simulation using LTSpice and the MC33063A model from http://ltwiki.org/index.php?title=Simulating_the_MC34063_in_Inverter_Configuration_with_an_Accurate_TL431A_Model yields the following behavior (one has to remove the I2 declaration below the "force f/f reset at startup" comment in the model): 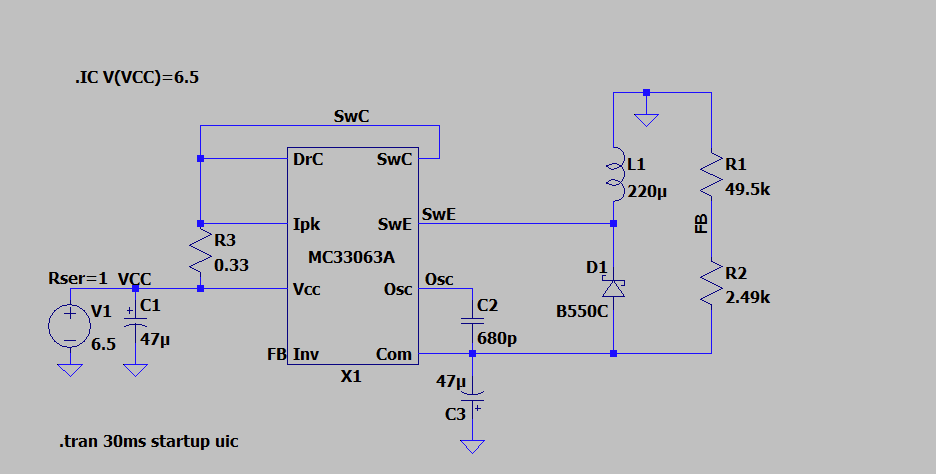 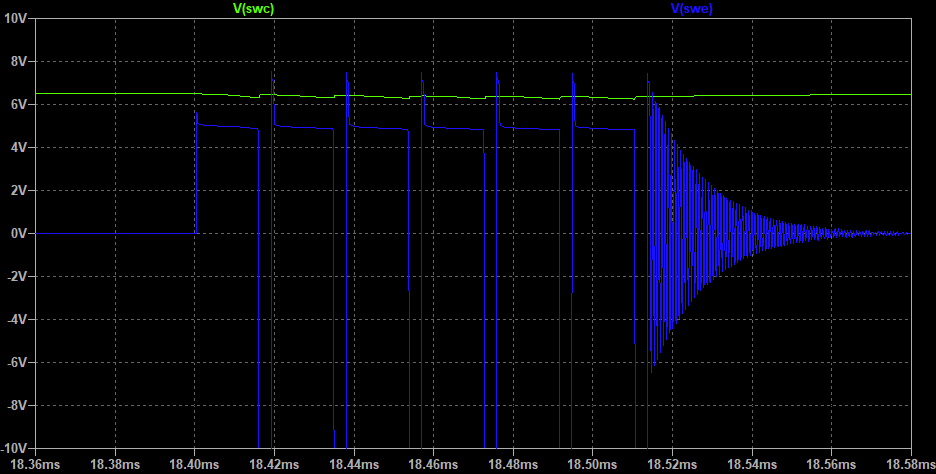 Simulation result for shown circuit. Shown are the voltage before (green) and after (blue) the transistor.

This is in a good agreement with the captured curves. A short inspection shows the current through R3 and the voltage drop between Pin 1,7,8 and 2 according to the simulation. 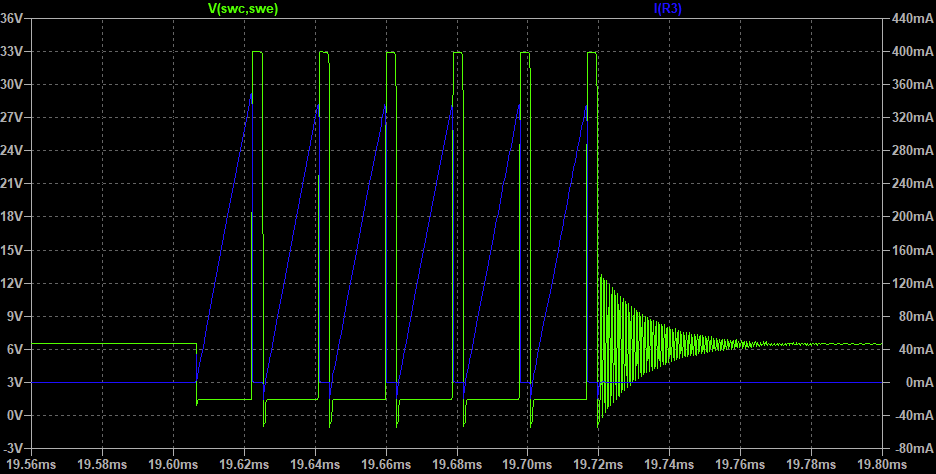 So what is going on? Well a short search yields that some datasheet actually show the following curve: 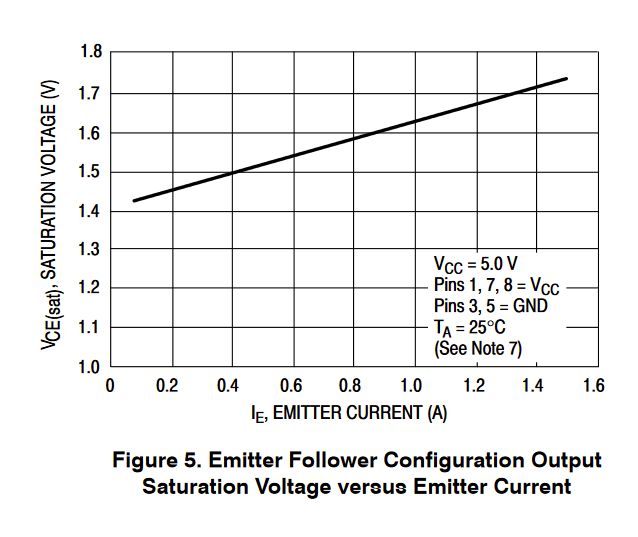 This looks like the observed behaviour. A closer look to the specs reveals that they actually "cheat" a bit: they show the CE of the separate stages. You have to add both to get the actual relevant total CE. 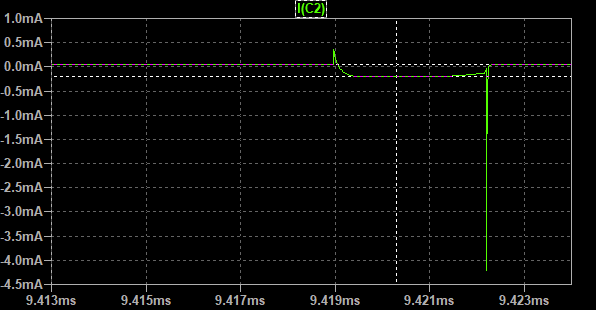 Checking the datasheet, one notice that the charge current is "too high", resulting in a low ratio. A short look into the model reveals that the bias current of 35 µA is accompanied by a leakage current of ~ 10 µA over S3. If Roff is changed to e.g. 1e17 the ratio goes up and the circuit works as "expected". Same goes if the difference between VCC and the target voltage is reduced i.e. target voltage lowered.

TL;DR: everything seems to work fine and within specs/model. One just have to interpret them in the intended way and mind their finite limitations.

I honestly haven't studied your scope outputs. (I apologize for that, as I'm glad you added them, regardless.) But I did do a quick check for obvious thoughts. And I have one for you.

This MC34063A datasheet shows the following:

it should still be in the range of less than 0.5V (from datasheet).

Note the specifications when pins 1 and 8 are connected, as you show them in your schematic.

What are the specifications shown there?

You are using the Darlington connection for the device. Therefore the relevant spec is 1.3 V.

This spec is for the voltage between pins (1 and 8) and pin2. Your scope shot shows the V on VCC and pin 2; you are ignoring the I*R drop on the 0.3 Ω, and don't show the current.

Use the scope to display pins 1 and 2 simultaneously.

(Also - do you have genuine parts ?- from a reputable distributor ?)

You are not measuring the saturation voltage of the driver -- you are measuring the V between pins 1 (&8) and 2. However this Darlington is driven from VCC (pin 6), and the voltage at pin 2 (switch emitter) is defined by the drop of the internal driver (say 0.3 VCE_sat of a PNP) plus the VBE of each NPN in the switch (say 0.7 V each) -- for a total of 1.7 V.

You 'gain' some saturation measurement by the 0.3 Ω -- basically this doesn't affect the voltage on pin 2 until the switch output transistors saturate (at ~ V(8,2) = 1.3 V). Basically you could increase R1 with no effect on V(6) until those transistors saturate.

Why (does) V_ce stay around the maximum value from the datasheet (max 1.3V, measured 1.6V), far from the typical?

Fundamental to all transistors as "switches" is that they have bulk resistance and hFE or Beta must be over-driven to 10% of the maximum linear value in order to reach the rated Vce=Vce(sat) @ Isat.

Thus looking at the current loop we can simplify it as follows;

If your problem is transformer saturation measuring current only the way I descibed will reveal the problem. This may reduce parasitic issues with your measurement methods.

4
Switching Boost Converter only works while probing with o'scope?
4
Why add resistor on comparator input?
1
Boost Converter (TPS61322): Loop Stability with Large Capacitors
4
Bus vs Signal Harness in Altium
0
Easiest (or cheapest) way to get both 5V and 3.3V on one circuit
1
Inverting OP AMP SLEW RATE
0
Arduino analog input value oscillating, why does the DMM work and arduino not so much
2
MC34063 inductor current peak does not match calculations
2
What causes the 7 volt peak in this 5 volt RC circuit, and why does a diode alleviate it?