Will a shift register cause metastability? 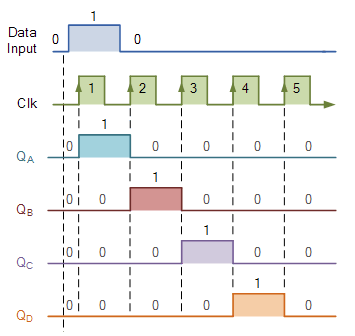 The graph above shows the output of a shift register.

Data sheets rarely put a warranted time for which the output will remain stable after the clock pulse. It's therefore difficult to prove from data sheet timings alone on individual pins that shift register timings can be met.

However, the ability to build shift registers out of flip-flops is such a common requirement, that in practice, all flip-flop families are designed so that when an output drives an input of the same family, the setup and hold times will be met by the output delay times. A flip-flop family that did not meet this requirement would be unusable, and rapidly shunned by all users.

Within an FPGA, the issue becomes even more moot, as the layout/timing tools have to take account of every bit of variable delay through signal switching devices, and so do the whole job for you (if you've set the constraints up correctly).

A perfect clock arrangement would have the clock reaching the clock input of all DFFs simultaneously. On the clock's active edge, the DFFs would latch in their D input levels and, after a delay, update their Q outputs.

In reality, there will be a skew between the clock signals at the inputs of all DFFs in the SR. A correctly connected-up SR ensures that this clock skew is less than the DFF D->Q 'travel time'.

The skew can be negative, so that the clock reaches the final DFF in the SR first, then reaches the DFF slightly before and so on. But this impacts the timing of any clocked logic driving the first DFF in the SR, so that has further timing consequences for the overall circuit.

For a PLD (FPGA/CPLD) or ASIC, the fitter software will take care of that while it tries to meet any minimum clock requirement that's been specified.

Since this question is tagged with [vhdl] and [verilog], I will answer the question from an ASIC/FPGA design perspective.

The problem you describe is entirely possible. If the clock arrives at the second stage significantly later than the first stage, the second stage may enter a metastable state since its input has already started to change. However, this is precisely what timing analysis is meant to prevent. Modern synthesis tools are timing driven and will ensure that cells and routing is laid out such that no metastability issues can occur. If the tool is unable to do this for some reason, the final timing analysis will mark the path as a timing violation.

Not the answer you're looking for? Browse other questions tagged digital-logic vhdl verilog or ask your own question.

2
Wrong data clocked in when using direct daisy chains of 594/595 shift-registers
0
Is "transition time" the same as "contamination delay"? If not, what is equivalent to \$t_{cd}\$ in the datasheets?