What is the purpose of a carrier signal in communication technology?

What is the carrier signal for when we actually do not care about this but only about the other signal (the useful signal?)

Why isn't only the useful signal used instead of mixing it with the carrier? 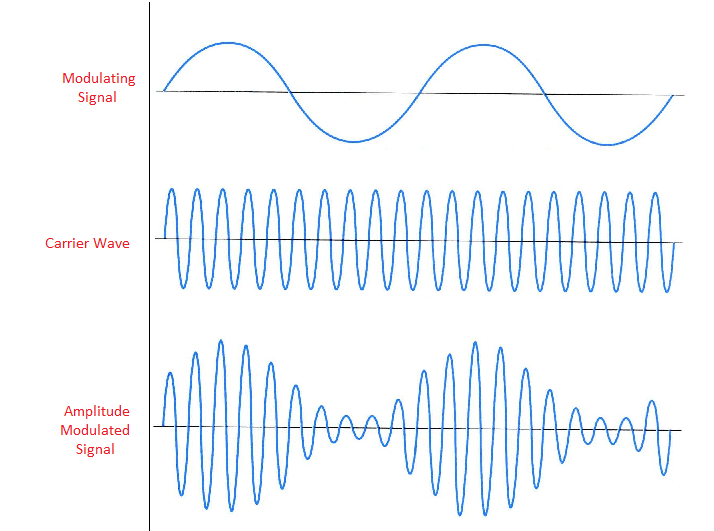 If you were to transmit just the audio signal, you would effectively have a single channel that everyone has to share. They'd be using the same tiny bit of the electromagnetic spectrum. You couldn't separate what one transmitter is sending from what another transmitter is sending. It would be like trying to have a conversation in a room with hundreds of other people trying hold their own conversations.

By modulating the voice signal onto a carrier, you make it possible to separate the individual transmissions.

The carrier is there to make that distinction possible.

It also has other advantages.

It is hard to make a high power amplifier that covers a large frequency range.

The audio range is often considered to be 20Hz to 20kHz. That is several octaves that your amplifier has to cover. It has to work properly over all those octaves.

If you use a much higher carrier frequency, your amplifier only has to work properly over a fraction of an octave. 20kHz is a tiny fraction of 1MHz, for example. A transmitter for a 1MHz carrier only has to cover 0.998MHz to 1.02MHz. An octave would be from 1MHz to 2MHz.

Another thing to consider is antenna size.

A signal at 20kHz has a wavelength of 150 kilometers. A quarter wave dipole antenna would need rods nearly 40 kilometers long.

The problems with bandwidth that I mentioned in regard to the transmitter amplifier also apply to the antenna. An antenna can only radiate effectively over a relatively small range of frequencies. As with the amplifier, that range is usually a small fraction of an octave.

An antenna made for audio frequencies would have to cover wavelengths from 15000 kilometers to 15 kilometers. An antenna made as a compromise between those extremes wouldn't radiate very effectively - and it would still have to be very large.

As a user, you are only interested in the signal modulated onto the carrier - you just want to hear the music from your local radio station.

As an engineer, you have to consider how best to get the signal from where it is to where you want it. For radio, that makes the carrier signal very important.

What is the carrier signal for when we actually do not care about this but about the other signal (the useful signal)?

• "Mixing" a carrier wave with a base-band audio signal, repositions the audio around the carrier in the upper RF spectrum.
• Once "mixed", the audio no longer appears at the base-band of the spectrum
• "Mixing" is a term used for modulation (or multiplication)
• This allows the audio to co-exist with other (different) audio channels that use a slightly different carrier frequency.
• You can then tune in to whatever audio channel you wish by moving the tuning dial to another carrier frequency. $$$$

Schematic of a simple AM modulator using a triangle wave audio input and a 1 MHz carrier: -

And here's what Vout looks like (blue) alongside the original modulating triangle wave in red: - 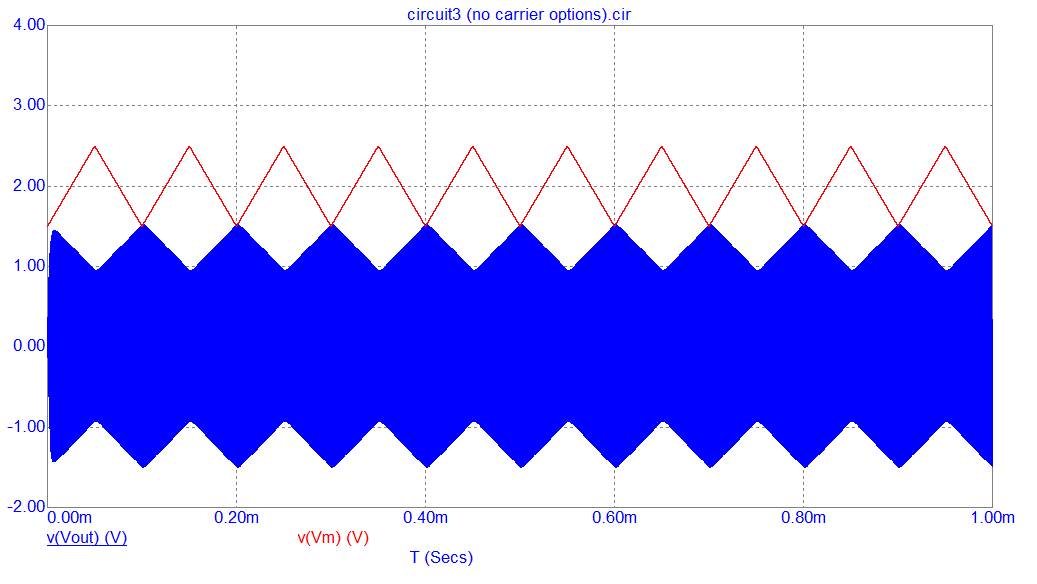 Spectrum of the modulated output

Now, if I use my FFT tools on the modulated carrier (Vout), I see this: - 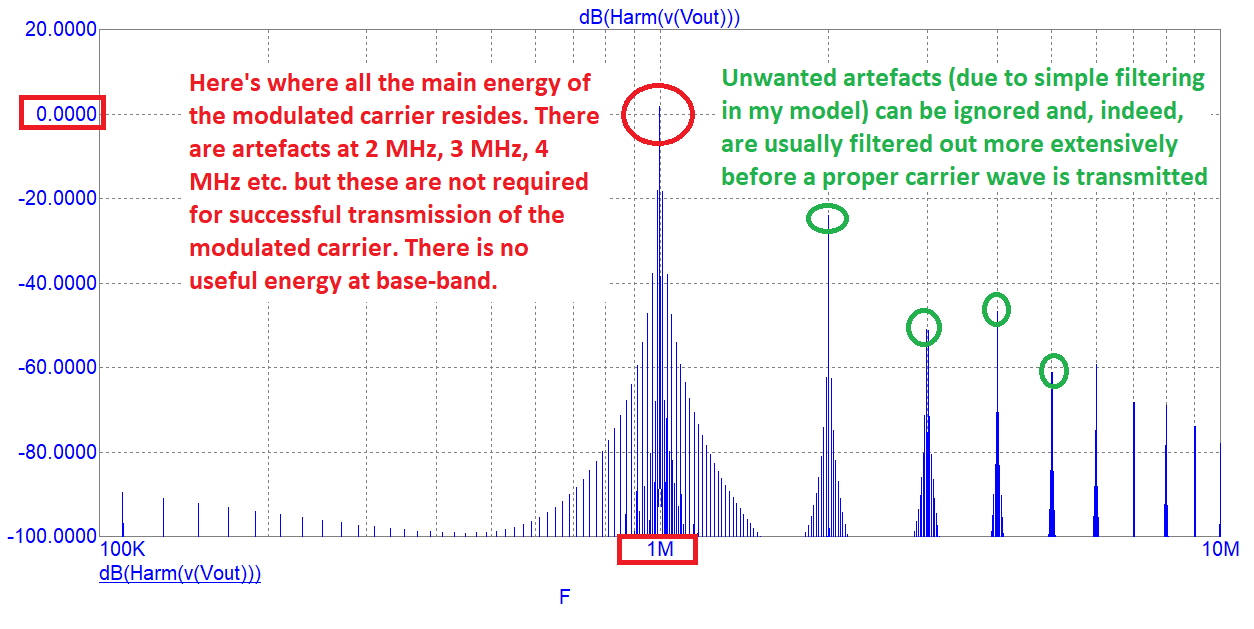 Using a sinewave as the modulation input

If I changed my modulating signal to a 10 kHz sine wave (better signal purity) and focussed on the resulting spectrum much closer to 1 MHz, I'd see this: -

Why isn't only the useful signal used instead by mixing it with the carrier?

This is how AM radios work.

But, it also comes down to how antennas work. If all you had was a baseband audio signal (say from 100 Hz to 10 kHz), to make an effective transmit antenna that could work at 100 Hz means it was to have a wavelength that is about one-quarter the wavelength of 100 Hz. So, 100 Hz has a wavelength of 3,000 km so, do you see that that is not only impractical but plain daft.

But, it's worse than that because your antenna also needs to be able to work with 10 kHz and, 10 kHz has a wavelength of 30 km. This means that your antenna at baseband cannot deal with such a wide spread of base-band frequencies.

On the other hand, when the baseband is modulated at 1 MHz the useful sidebands (see above picture) are at 990 kHz and 1010 kHz (when the modulating signal is 10 kHz.

At lower modulating frequencies (such as 100 Hz), the useful sidebands are at 999.90 kHz and 1000.10 kHz. This means that a fixed antenna length can handle both sidebands because the respective wavelengths (at 10 kHz) are 300.033 metres and 299.97 metres respectively.

This is what makes an antenna work.

Why isn't only the useful signal used instead of mixing it with the carrier?

Pictorially, the process goes as follows: You have a modulating signal that carries some information. It is at a much lower frequency than the carrier. 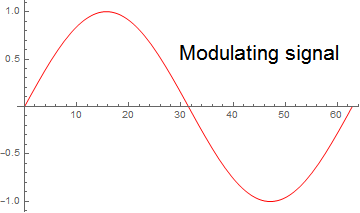 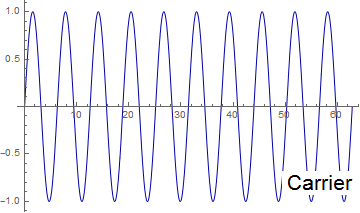 You can transmit the carrier, but it has no information. If you receive one cycle of the carrier at the receiving end, that is all you need to recreate all the cycles.

If you mix (multiply) the carrier with the modulating signal, you get a modulated signal, that has information (embedded in the changing amplitude for now) and that can be transmitted using a manageable antenna size. 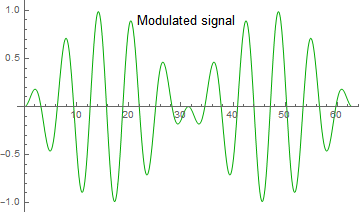 At the receiving end, you mix (multiply) the modulated signal with a locally generated carrier once again that should be at the exact same frequency to recover the information bearing modulating signal. 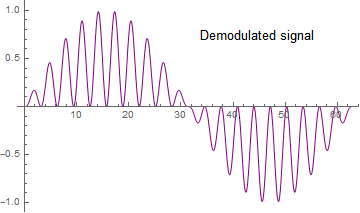 The modulating signal can now be recovered by low-pass filtering the carrier that was at a much higher frequency than the information signal. It is called envelope-detection in textbooks. 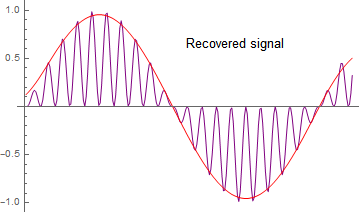 This was amplitude modulation (AM) and is greatly affected by noise in the channel. You can embed the same information in the phase or frequency of the carrier resulting in PM/FM schemes that are more robust to channel interference.

For FM and other scenarios where one source and multiple receivers are present, this explanation is sufficient.

For cellphones, many users are transmitting and receiving; therefore the same carrier cannot be used. Multiple carriers within a band are assigned to the service provider and an elaborate scheme is used to frequency hop and transmit your data and conversation. As and when you attend a course on wireless comm. your concepts will be cleared up.

I hope this addresses some of your questions.

Imagine you bought a huge wardrobe and you do need to bring this to your home. But the only transport equipment you have is a small car. It's not possible to put the wardrobe in the car due to the size limitation (bandwidth) and strapping the wardrobe onto your car is dangerous for the burden (loss). So, wouldn't it be better if you dismantle the wardrobe and put the pieces into your car and then setup the wardrobe at your home again upon arrival?

Now this is what AM modulation and demodulation is. The medium is your car and the wardrobe is the useful signal. But it requires more effort (complexity) to carry the burden from point A to B safely and securely.

Another example is the fibreoptic. Imagine you have 4 different signals and all of them should be carried at the same time. But you have a single core of fibre. All you can do is to carry each signal with a different wavelength, and setup the receivers to be sensitive to different wavelengths. Neat trick, innit?

Simply, the bandwidth, range, number of nodes and many other parameters bring limitation. So modulating the signal is almost always a must when it comes to carry the signal through any medium.

Not the answer you're looking for? Browse other questions tagged rf signal communication telecommunications or ask your own question.

4
Controlling gain and modulation depth of long-tail pair as AM modulator?
0
A simple DIY example of how bit sequence is converted into corresponding radio wave sequence, and vice versa

1
The purpose of I and Q channels in RF communication
7
Why do we not care about matching the input impedance of non-RF amplifiers?
2
Link integrity test pulse vs carrier signal
2
What is the technology that transmits voice in 3G networks?
0
Why is DC offset from LO feedthrough less problematic in the second mixer stage of a dual conversion receiver?
3
How does the maximum transmission rate depend on the carrier frequency?
0
carrier suppression in dBc for a particular DSB-SC signal
0
Equivalent baseband communication channel
0
MC1496 can be used as a DSB SC and AM IC, but their circuits on the datasheet are the exact same. What is the difference between the two?