I'm trying to drive a bunch of motorized ball valves from an ESP32.

There are two limit switches inside the motor assembly to turn it off once it has reached the desired position.

It didn't work with relays, so I wired up a triac instead, using a simple static relay schematic, with a MOC3020 and a BTA08-700 triac I had available. It's a snubberless triac, so I didn't use a snubber. 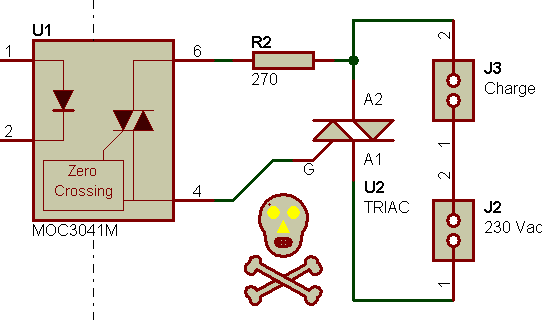 This works fine, and without EMI from relay contacts arcing, I'm no longer having problems with the ESP32 rebooting.

However, I'm worried about the limit switch:

When the micro stops driving the MOC3020, the triac will stay on until current drops to zero, which means no problems with the inductive motor.

However, I want to run the motor until the valve is open and the limit switch opens. In this case, when the switch opens, it will bounce and arc. At some point the triac should turn off, but I'm not sure all the energy in the inductance will have been dissipated by then. I'm worried this will cause a spike that will exceed the triac's maximum voltage.

So, should I put a MOV or other protection component across the load, or across the triac, to catch this spike? I could also put a MOV or snubber across the motor inside the valve assembly, because currently there are none.

I tried some canned snubbers...

I said there were no EMI components inside the valve: there is a motor cap, but that's just to phase shift one winding so it turns.

I don't have a high voltage probe, so I used a "capacitive coupled probe" (ie, stick the scope probe clip on the wire without stripping it). Amplitude is wrong, but signal shape is all that's needed to check a snubber.

No snubber. I press on the limit switch, turning off the motor. What a rich blend of harmonics! I tried several other values (47n, 100R), and the result is always more or less the same as long as the resistor is below 100R.

I put one snubber between each wire and the common.

The nice thing is, it also works if the snubber is outside the motor enclosure, which means it is on the "wrong" side of the limit switch. I guess this is due to the 330nF motor capacitor on the PCB, which sits between the "open" and "close" wires, and shorts them together at HF. So, when the limit switch opens on one winding, the switch on the other winding is still closed, which puts the motor cap in series with the snubber... and it works.

That should make installation simpler.

Not the answer you're looking for? Browse other questions tagged triac inductive snubber mov or ask your own question.

2
I2C versus interference
2
NPIC6C596 resets itself

7
Triac Turn-on Stress Calculation
4
Choosing components for a triac's snubber
20
How to design an RC snubber for a solenoid relay driving an inductive load?
14
Using an RC snubber with a triac. Is this design safe? (simulation included)
4
Why not use only a MOV as a snubber for relay control of AC motor?
5
Relay control of AC motors, handling turn-off kickback
7
Triac spurious triggering issue
2
Controlling a 240V AC Universal Motor with Microcontroller, Optoisolator & TRIAC
1
Operating a 24VAC solenoid with a Triac. Protecting with TVS DIODE, RC Snubber or both?