I am trying to use Thevenin's theorem to determine the voltage and current of a certain resistor (625 Ω,) but somehow, nothing is really adding up. I measured the results in a simulation using Falstad, and not even the equivalent resistor calculation seems to be correct. I have no idea what I'm doing wrong, I followed the steps that were in the textbook. 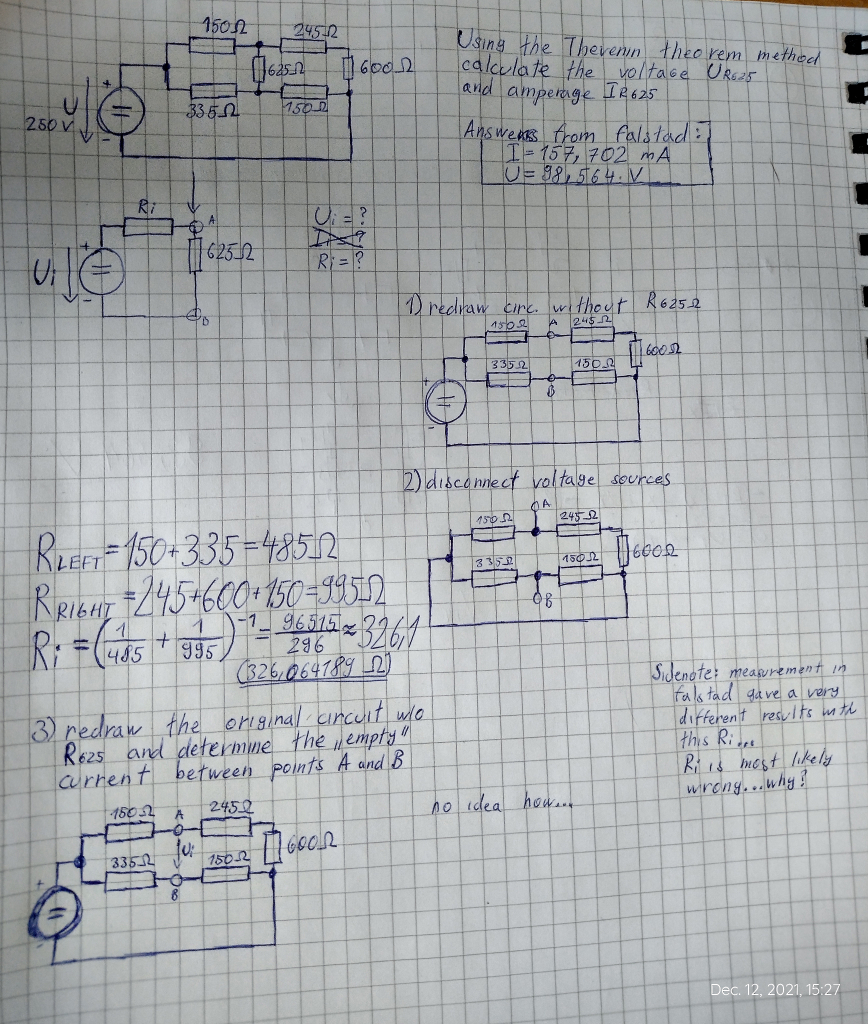 I'm completely stuck on this exercise. I would try more, but I really just have no idea how. It's not like I know why I'm taught electronics when I'm studying software engineering.

First thing I want to say to you: electronics is only one of my hobbies. I'm not an EE and I've only a high school education. If anything, my own life is all about CS, too. That, and solving certain novel problems related to couple of specific areas of physics, are what I get paid to do. Though I was privileged to work with a team at Intel on the BX chipset, too.

I know most areas of CS well. In fact, well enough that I was paid to teach as an adjunct professor at the largest 4 yr university in my state for some years in the 1990's. (I taught 2nd and 3rd year classes on computer architecture, assembly language, concurrent programming, and operating systems. Last time I visited PSU, a few years ago when it had been more than a decade since, I was well-remembered by everyone there and made to feel very welcome.) So I certainly have some appreciation for your position, though my own background is a little different than yours.

I'll include an addendum below on re-drawing schematics. You may or may not care to read it. But I always suggest taking the time to re-draw any schematic you are given. I admit that it takes lots of practice to accumulate a good sense about it. And you may not consider that practice worth your time, given the CS emphasis in your life. But I'm just putting it out there, in case it does.

So the very first thing I do before attempting to analyze a circuit is to redraw that circuit. The process of doing it helps me think and gather up a few details that I may not notice so easily, just staring at someone else's depiction. But re-drawing can often help the readability and the process itself tends to improve understanding.

Let's do that now: 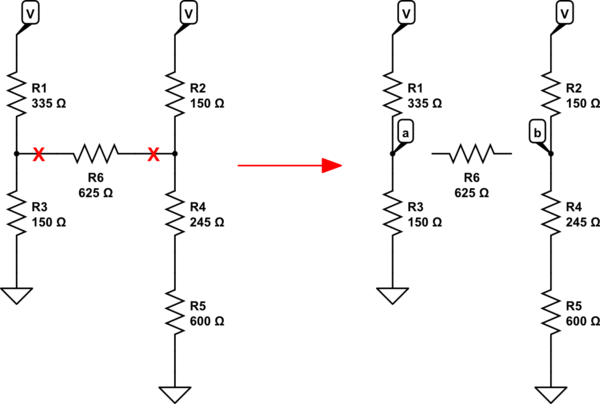 Before I proceed, take note that I have introduced a ground symbol. You are allowed to do that for exactly one node (wire.) You can pick any one you like, too. But just one. There are lots of reasons. But the essence is this: a voltage is never an absolute number. Instead, a node voltage is always "with respect to some other node." Voltages are actually voltage differences. There is no such thing as an absolute voltage number. Doesn't exist. So make sure you get any such wrong ideas out of your head.

In CS, it works reasonably well if you think of values and variables as having a number that is absolute in a mathematical sense. And this, while it works well in CS, will get you into trouble in EE. A voltage is NOT "just a number." It is always a difference. So, if you assign one node (wire) to the value "zero" and then imply that every other node is always "with respect to this 'zero' node" then you can treat the numbers as absolute and move on. But you still have to keep in your head that it isn't really true. That the node voltages are "with respect to this special node I've picked out." So burn that into your head, too.

Assigning a ground like this and re-drawing the schematic to emphasize a few details (again, read the drawing addendum below) makes the process quite a lot easier to read, I think. You can see, on the right side schematic above, that all you have are two voltage dividers. That's it. All you need to do is to solve those for their Thevenin eqivalents and plug that in.

Now let's look at the right side schematic. 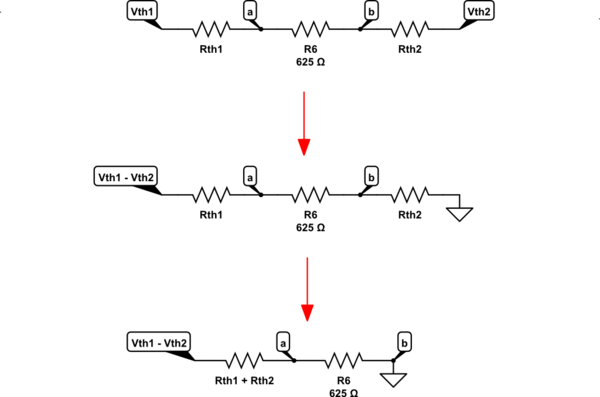 The steps I took are:

Now, this actually is the result. The final answer is:

The one thing to keep in mind is the choice I made about assigning B to ground. So let's return to the original schematic: 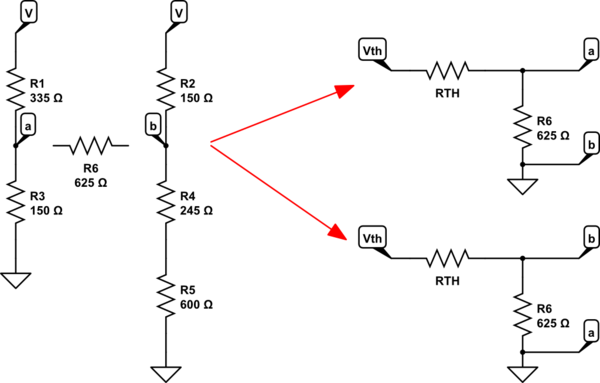 These are both equivalent. The only difference is which of the two nodes have been assigned "ground" or zero. With one choice, you'll get the opposite signs for the voltage and current versus the other approach. But that's the only difference.

So if the above equations provide a sign you don't like (such as 'negative') then just flip the perspective and you'll get the sign you wanted. It's nothing more complex than that.

Using SymPy, which is freely available to anyone, I can do the following:

The first value is the current in \$R_6\$ and the second is the voltage difference across \$R_6\$.

A sensible first step (just to get you started) is this: -

Let me repeat this a few times to get the message home: - 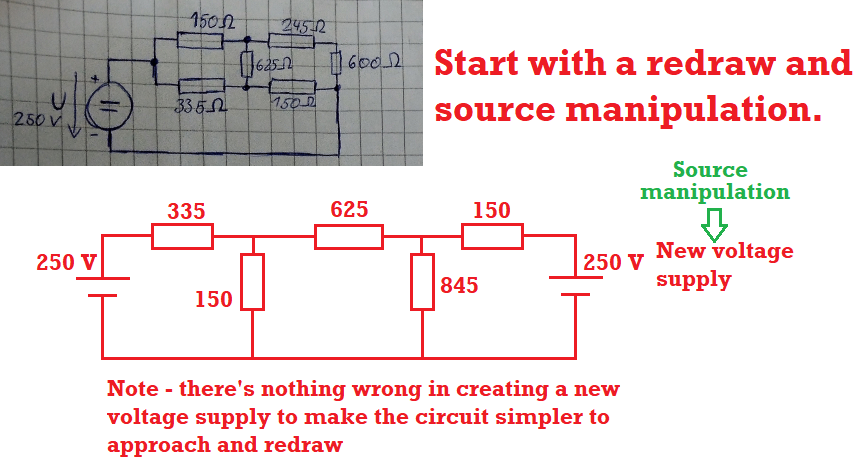 I had no idea the circuit can be redrawn like this. Thanks, the Ri I got has around 230.995Ω and it checks out! But what do I do next?

Can you take it from here?

uhh…I give up, I don't understand why did the sources change so randomly

Take the left hand 250 volt source and the associated closest two resistors (150 ;ohm; and 335 Ω). Think about that in isolation - what's the output voltage when unconnected to anything - answer 77.32 volts (as shown) AND, what is the Thevenin resistance of that new source (hint 335 Ω in parallel with 150 Ω). Does that make sense?

Isn't there some formula to calculate the voltage?

Can you do the other side by yourself?

There was nothing wrong with the way you were trying to solve the problem but it was drawn in such a way that you couldn't recognize what you were seeing. With the voltage source shorted the top 150 ohm resistor is in parallel with the 845 ohm series combination. They're connected at both ends. Similarly, the bottom 150 ohms is in parallel with the 335 ohms. The two parallel combinations are in series with one another. Do the arithmetic and you'll get the Thevenin resistance, 231 ohms. That was the hard part to see. With the voltage source restored you have top and bottom voltage dividers, and the Thevenin voltage is the difference between them.

Not the answer you're looking for? Browse other questions tagged thevenin or ask your own question.