I got myself a hot air soldering station with pre-heating plate.

I could not find satisfiable recommendations with regards to rework procedures or initial soldering procedures.

Questions I ask myself:

I'll be using this mainly to repair/replace components.

This depends on many things.

It depends on if there are components on the back side of the board. If so, they could fall off from too much bed heat. And it depends on what sensitive components are placed where on the board (such as anything made of certain plastics, which will melt or deform at "low" temperatures.) It may be necessary to add a metal shield to prevent the hot air from reaching a sensitive part. And you should qualify the hot-air temperature; many devices run far hotter than their setting indicates.

The best way to determine all of these and more, is to practice on scrap boards. You'll quickly learn what temperature will melt the black plastic under SMT electrolytics or DIL headers, for example.

Also consider that the exact solder alloy plays a large role in this. Higher-melt alloys (such as RoHS) are generally harder to work with, while lead-based or other low-temperature alloys make everything easier, but then contaminate the board. There are a thousand things to consider.

I could then use the hot air gun to (de)solder selected components. Or (in case of a fresh board) could I just ramp up the temperature of the preheater until the solder reflows?

Well yes, but consider that there is a large void of cooler air above the board, so you'll have to crank the bed heat fairly high to achieve this. It's fast and easy to flow some hot air from the top once the board is warm (using the hot air tool.) I'd recommend that, rather than risk de-laminating an unknown board from too much bed heat. By all means, try it on some scrap boards though. You may find that not all boards are created equal, and some boards will delaminate at a much lower temperature than others. I've noticed no discernable pattern between manufacturer/age, so it's really a try-it-and-see approach.

To cool down, should I lower the temperature using the preheater to a maximum temperature first (say from 200°C to 100°C), or can I just remove the board and let it cool down on the side?

This depends on the sensitivity of the components used. In general, it shouldn't hurt anything to ramp-down the bed temperature or even just shut it off (and let the residual temperatures decline.) But many devices do have a time limit at soldering temperature, so just don't keep the board too hot for too long. If you look at the reflow data in a typical datasheet, simply removing the board from heat (and placing in an airflow-less area like on a enclosed wire rack) can be fairly comparable for some devices/boards. Other devices may require very specific conditions. Just don't blow cold air on it (or otherwise quench it, etc.) as this can cause components to crack. Incidentally, the board might make some faint crackling sounds during cooling as everything shrinks slightly and stresses are redistributed. But if it makes a loud crack sound, inspect for something broken; failure during cooling is a remote possibility, especially for ceramic devices.

The answer to almost all your questions is "it depends." Factors like board size, layer count, component type, solder type, and what type of rework or fabrication you are performing all will change potential answers.

For example: smaller boards won't need to preheat as long; a tiny SMT diode might not require board preheat if you're just removing one; a board with large copper pours will benefit from preheating longer; etc.

There are two main goals of all this temperature management:

As a general practice when I am doing rework, I start the preheater at 100°C and increase it gradually as I figure out how much time I need with the hot air from above. I view the preheater mainly as a way to speed up the process without creating as large a temperature differential between the area of interest and the rest of the board.

I also vary the hot air temperature based on what I'm doing. 400°C (for lead-free solder) is my starting point. I sometimes go to 500°C if all I want to do is quickly remove components and am not concerned about damage to them.

I highly recommend experimenting with boards salvaged from junk to practice on. Removing or replacing components on such boards will help give you experience and knowledge to judge everything from hot air flow rate, preheat temperature, timing, and more.

I came across an interesting analogy from Hakko in their article "Preheating PCB's During the Rework Process": 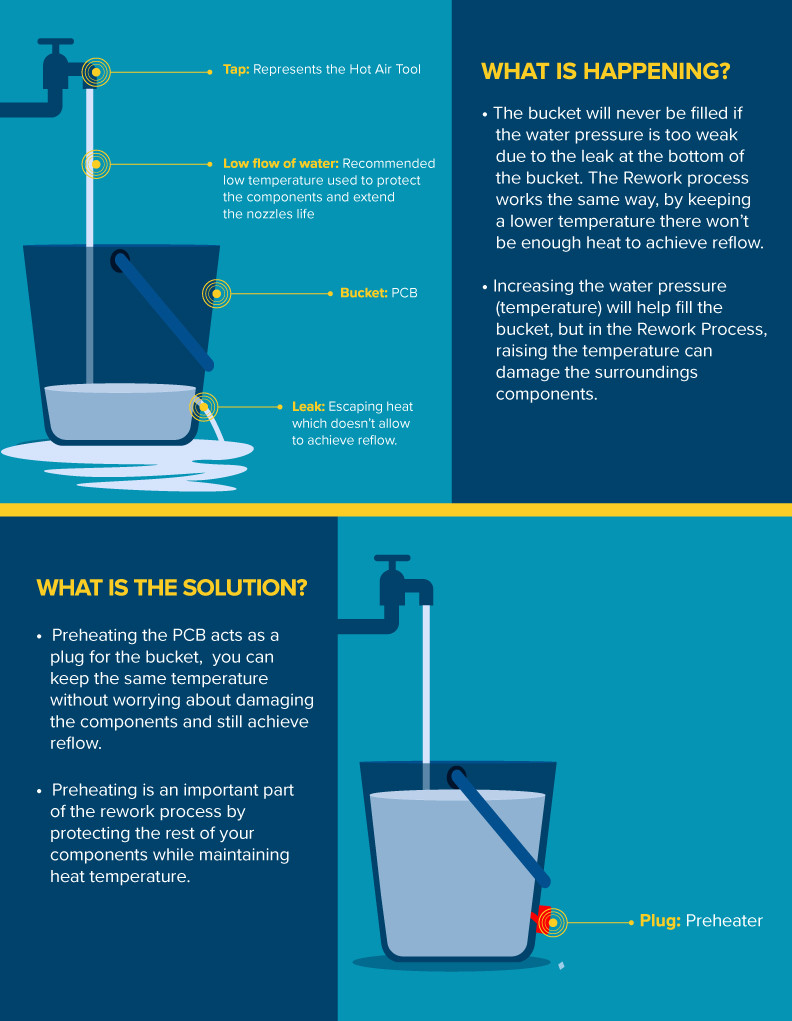 Not the answer you're looking for? Browse other questions tagged soldering hot-air or ask your own question.

10
Hot Air Gun for Reflowing a Board?
2
Need recommendation for a first hot air station
4
SMD Removal Process
2
Consequences of not following reflow profile
3
Is it safe to use hot air on SMD LEDs?
2
Hot air rework temperature to avoid solder melt on opposite end
3
Is hot air only meant for desoldering?
0
Desoldering with cheap Hot Air Rework Station
0
Need some tips on using hot air soldering station for my project
0
What can be soldered with a hot air rework station?