Level shifter for interfacing SCD41 and Raspberry pi over I2C

I am connecting an SCD41 CO2 sensor to a Raspberry Pi Zero 2 W. To keep the 3.3V current draw low, I would like to power it at 5V (peak current is 205 mA at 3.3V vs. 137 mA at 5V). A TXS0108E module works as a level shifter for the I2C interface, but a TXS0102 module does not. With the TXS0102, the SCD41 acknowledges the addresses it receives, but it does not acknowledge the data that follows. Looking at the datasheets for the level shifters, I don't see what difference could be causing this or how to fix it. Any suggestions?

Scope captures are as follows. SCL and SCD on 5V side is sometimes clean: 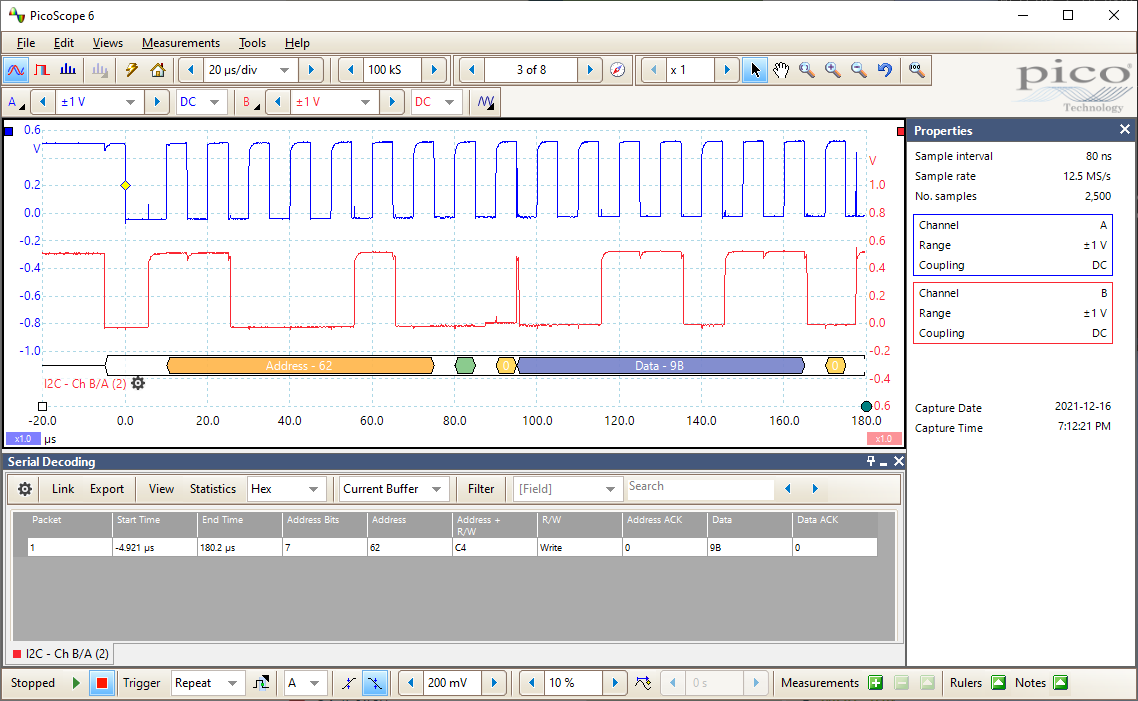 Other times it is strange: 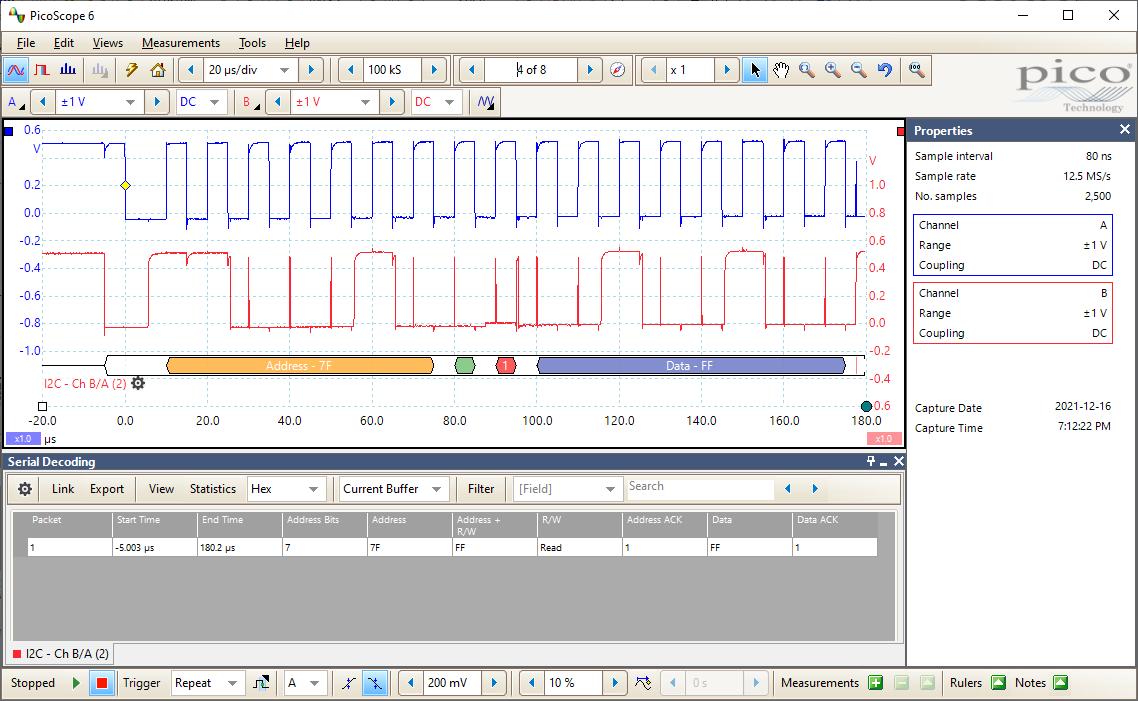 SCL on both sides: 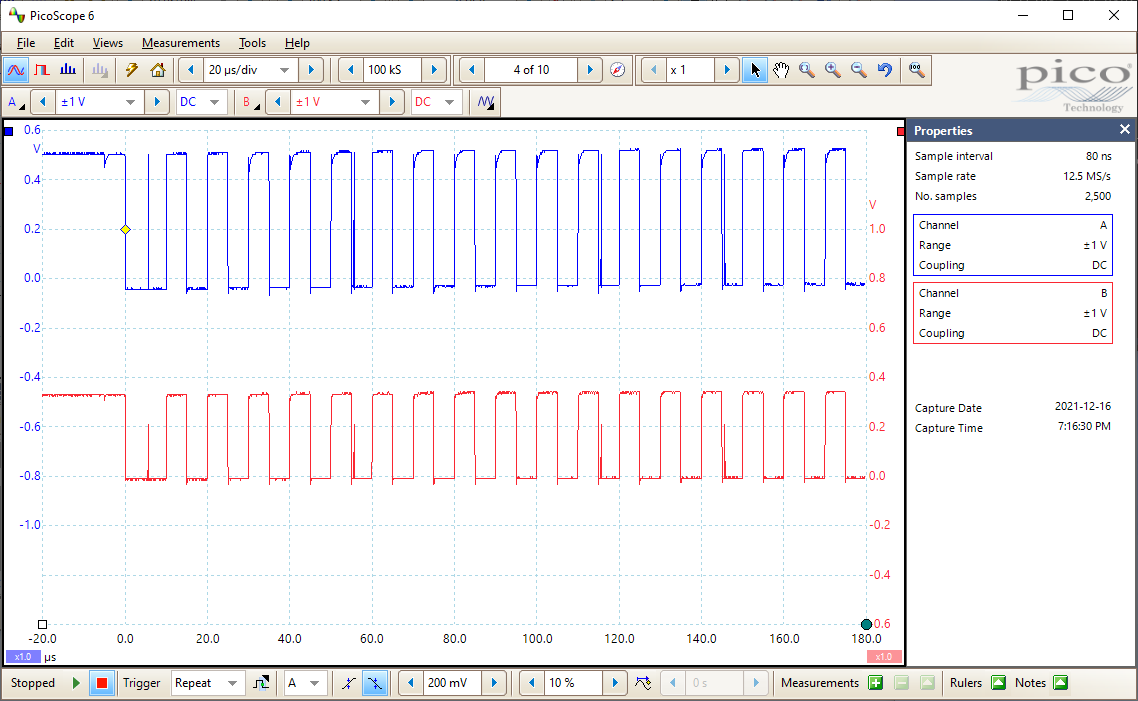 SDA on both sides: 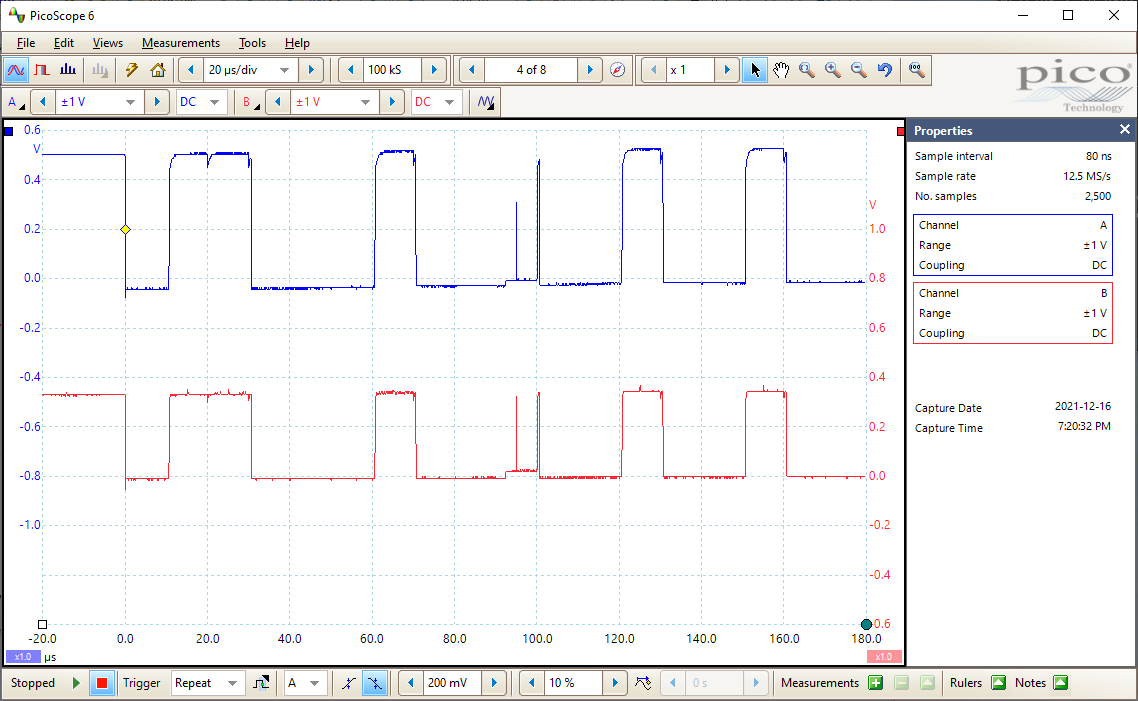 Indeed, it is interesting that one of them works and one does not.

Especially since the TXS0102 should work as it is even intended for that, and TXS0108 should not work as it seems to be unsuitable for I2C bus.

By looking at the scope captures, both the rising and falling edge look very slow. I would expect the falling edge to be very sharp compared to the rising edge, as the falling edge needs to be faster than 300ns. Which was fixed by changing from 1x to 10x. Now the glitches caused by rise time acceleration are clearly visible.

However, unless you specifically need edge time accelerators on your bus, I would not use either of these two chips just for simple voltage translation.

So the TXS0102 should work, but it depends on your external circuitry if it works or not. The TXS0108 should not even work, but again, it depends on your external circuitry. What matters are the bus capacitances, bus voltages, external pull-ups, chip drive strength, and even bus length. You need to look the bus with an oscilloscope to see why it fails to work.

Both translator chips seem to require or cause faster transitions on bus than typically found on I2C bus. These level converter chips contain active circuitry in them, to accelerate logic signal edges. In fact the accelerated edge time may be less than what is allowed on an I2C bus.

However, what explains the difference in their operation is their internal structure. The 0108 has both rise and fall time accelerator, while the 0102 only has a rise time accelerator. When a transition edge is detected, the chips will momentarily drive the bus hard to the same state to make the transition faster, but this is not allowed by I2C, and it can cause problems, unless the chip does it in a way that is specifically compatible with I2C.

The 0108 has 40kohm pull-ups when idle, and 4k during rise time acceleration, and accelerates both rising and falling edges.

The 0102 has only 10k pull-ups and accelerates only rising edge.

So there is enough of internal differences between the chips.

Not the answer you're looking for? Browse other questions tagged raspberry-pi i2c level-shifting or ask your own question.

11
I2C slave address not acknowledged (sometimes)
5
i2c over gpio - level shifter
6
Odroid XU4 and Olimex MOD-IO by I2C via level converter
3
Trouble initiating I2C communication between Arduino and 3.3V Slave
0
Both sides of a voltage level shifter connected
1
Why are input and output of I2C voltage level shifters connected?
0
Bit Bang SCCB Issue
2
is this level shifter a dud or am i doing something silly?