Why application notes advise series resistance to be added on clock lines for high-speed interfaces, like SDIO, and not on data lines?

Many application notes (like this one) advise series resistance to be added on the clock line, close to the source. I do understand that this resistance is added there to match the source impedance to the characteristic impedance of the line (usually 50 Ohm). However, what bugs me is that when it comes to data lines (which can switch just as fast as the clock line for DDR cases) no one advises to place series resistance. I would expect engineers to put series impedance on the drivers of data lines to provide matched source impedance just as well. Any idea why is this the case?

The receiving circuit only cares about voltage levels on data lines during a time interval centered on the clock edge, with setup/hold times on both sides. 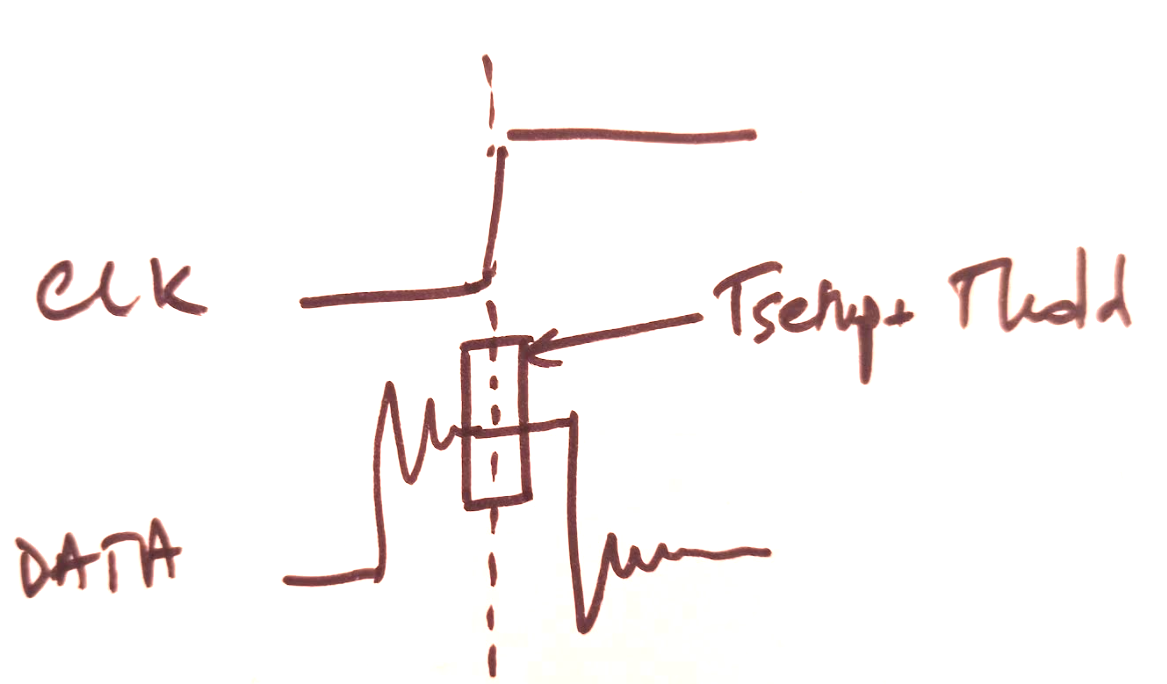 So... even if the data lines are unterminated and suffer from poor signal integrity, if the clock is slow enough versus trace length to allow the levels to settle before the clock edge minus Tsetup, the receiver will sample correct data.

However, if you want higher throughput from your trace or twisted pair, then the clock has to be faster. Then, you don't want to wait for the mess on the data lines to settle, and receiver Tsetup+Thold becomes a significant portion of the clock period. In this case, you absolutely need to terminate the data lines. For an example, check some USB eye diagrams. Termination resistors can be internal to the chip (for example DDR RAM) so you won't always see them on the schematic.

Sometimes the chip will have internal terminations, or offer several drive strength or slew rate settings for the IO's. Some other chips like 74HC or AHC have rather weak drivers, this is done on purpose both to limit slew rate and source-terminate the trace with the output FET's resistance. Other chips like 74AC and some micros have fast and strong output drivers, which make a lot more noise. So maybe you'll get a clean signal without resistors, or maybe not, it really depends on what's driving the trace.

However, what bugs me is that when it comes to data lines (which can switch just as fast as the clock line for DDR cases) no one advices to place series resistance.

If the data gets clocked into a chip (such as a DDR SRAM as per your question) then it's important that the clock line does have a proper source-end series-termination resistor to ensure that the signal integrity at the DDR CLK pin is good.

It's less important for data because, if the data has a little wobble on it before it is clocked in then, that wobbly event has settled before the clock transfers it (it's all in the timing sequence of data being made available prior to clock activating).

Having said that there are a couple of things to consider: -

Clock source is always host. Data source can be SD card or Host, depending whether is it read or write operation.

Because Data is bidirectional, series termination can only make things worse.

If you consider DDR2-DDR5 SRAM, the standard uses on die termination (ODT) on the data lines. The termination is typically configurable, but it is there, just internal to the chips. Since it’s bidirectional, the ODT gets turned on and off whether you’re doing a read or a write. I’ve only done designs with DDR3 and DDR4, but in this case I don’t think I’ve ever had series resistors on the clock lines. They are differential, sourced by the controller, and are AC terminated to VTT from what I remember.

For other types of signals, I don’t know if this is common, but for any new prototype I design, I almost always add series jumpers to every data line. This allows me to replace them with snubbers during testing if I see reflections causing any issues. The only exception to this is if I have very high speed signals or bidirectional data, in which case I will use Hyperlynx or another SI tool to optimize the layout prior to fab, which may or may not include series snubbers.

Not the answer you're looking for? Browse other questions tagged pcb spi signal-integrity high-speed sdio or ask your own question.