I have spent a lot of time thinking about Faraday's law and common explanation as given on wikipedia does not sit well with me. I may be confused. My concern is entirely with the wording of this explanation From wiki:

"The increase in current causes a back EMF (voltage) across the inductor due to Faraday's law of induction which opposes the change in current."

To put it another way, looking at the situation below where the the switch closes, current begins to flow so di/dt > 0, then we know induced voltage V > 0. So from the way we define positive current in the circuit, and the equation V = Ldi/dt, the induced voltage should be positive on the source side (inductor side 1 as shown below). This agrees with the figure but not with the wording of the explanation. Because the change in current is positive, current is increasing from source-> ground, the opposing current which OPPOSES this change would be flowing from the ground->source. The voltage which would be associated with this opposing current would then be positive on the ground side relative to the source side, but this is opposite what we see in the figure below and the equation V = Ldi/dt. So why would they put this explanation on wikipedia? Which should be the most clear and eloquent explanation of this mathematical relationship? 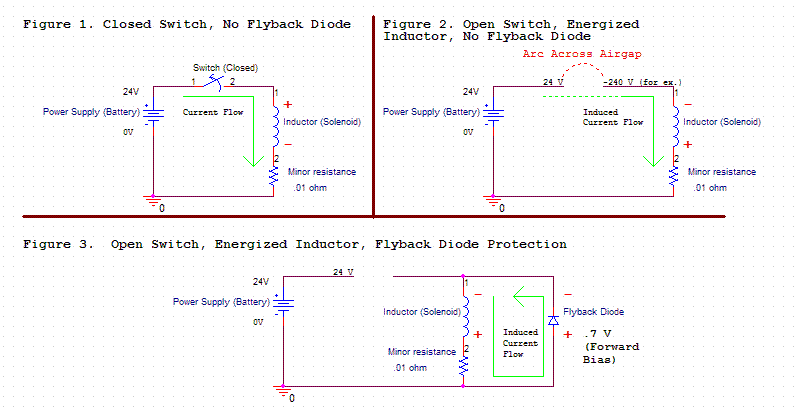 Thank you for taking the time to read and respond!

Because the change in current is positive, current is increasing from source-> ground ...

I'm not sure you can ascribe a polarity to a current change.

General language is not good at describing physical phenomena accurately, and I think the wiki quote is guilty of some sloppiness.

Something that irks me in such descriptions is the due to Faraday's law of induction bit. The back EMF is not due to Faraday's Law of Induction, it's just described by Faraday's Law. Physical phenomena happen because they do, not because we describe what happens quantitatively and then call that description a Law. But I digress/rant.

@Javaming, here's the roadmap of the problem - debunking ideas first: - 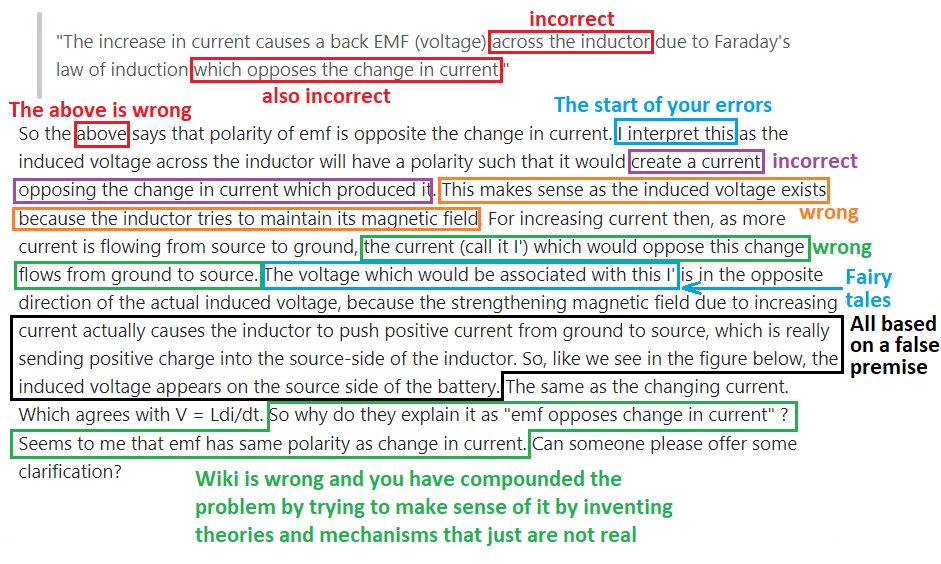 The above is for Javamang so that he understands why I took the main path (below) of explaining how an inductor works (he wasn't happy in comments that I'd done this) but, there's no point trying to fix someone's incorrect ideas without debunking them first so, that is why I'm explaining this to him.

I interpret this as the induced voltage across the inductor will have a polarity such that it would create a current opposing the change in current which produced it.

No, that's not correct. No extra current is created at all: -

So, that induced emf is in series with the inductor and, we know that if there is no net voltage across an ideal inductor (due to the applied voltage and back-emf being equal) then the current that flows through the inductor is not defined by this approach: - 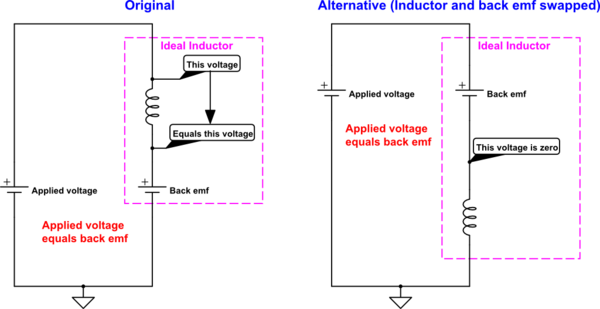 We can also say that when both sides of an inductor have the same voltage, we can regard the inductance as having zero impedance hence, using ohms law, the current flow is this: -

So why would they put this explanation on wikipedia? Which should be the most clear and eloquent explanation of this mathematical relationship?

"The increase in current causes a back EMF (voltage) across the inductor due to Faraday's law of induction which opposes the change in current."

It's fundamentally wrong - the back emf has no part in defining the current that flows into an ideal inductor when a source voltage is applied.

Because the change in current is positive, current is increasing from source-> ground, the opposing current which OPPOSES this change would be flowing from the ground->source.

This is flawed as mentioned above - there is no extra opposing current. You need to think about things in a different way.

Not the answer you're looking for? Browse other questions tagged inductor flyback induction back-emf emf or ask your own question.

6
How can there be a current without a voltage?
0
Constant Voltage Applied to Inductor

0
How does an inductor generate back emf equal to a source driving it?
2
Back EMF of an inductor in a DC circuit?
0
How to Detect Back-EMF from Inductor
7
"Where" does back EMF appear in motor?
0
What should be the sign of the voltage across the inductors while doing circuit analysis?
2
If induced voltage (back-emf) is equal and opposite to applied voltage, what drives the current?
1
If the self-induced EMF in an inductor is 180° out of phase with source voltage, shouldn't they cancel out and net voltage should become zero?
0
Constant Voltage Applied to Inductor
1
Back-EMF Concepts (Confusion)