Equivalent circuit of the transformer primary and secondary

The equivalent circuit of the secondary side has leakage reactance X2 and DC resistance R2 which is also present on the primary side as X1 and R1.

But on the secondary side there is no magntization reactance and ac resistantance which are present on the primary side as X0 and R0 respectively as shunt.

Why the primary side had magnetization reactance and resistance on shunt while the secondary side doesn't have those although both primary and secondary windings have same Flux through them and are physically alike except the number of turns may change? 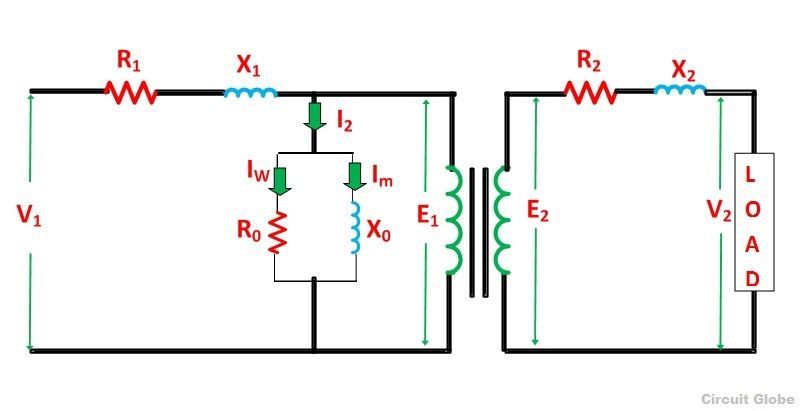 Nothing wrong with doing this: - 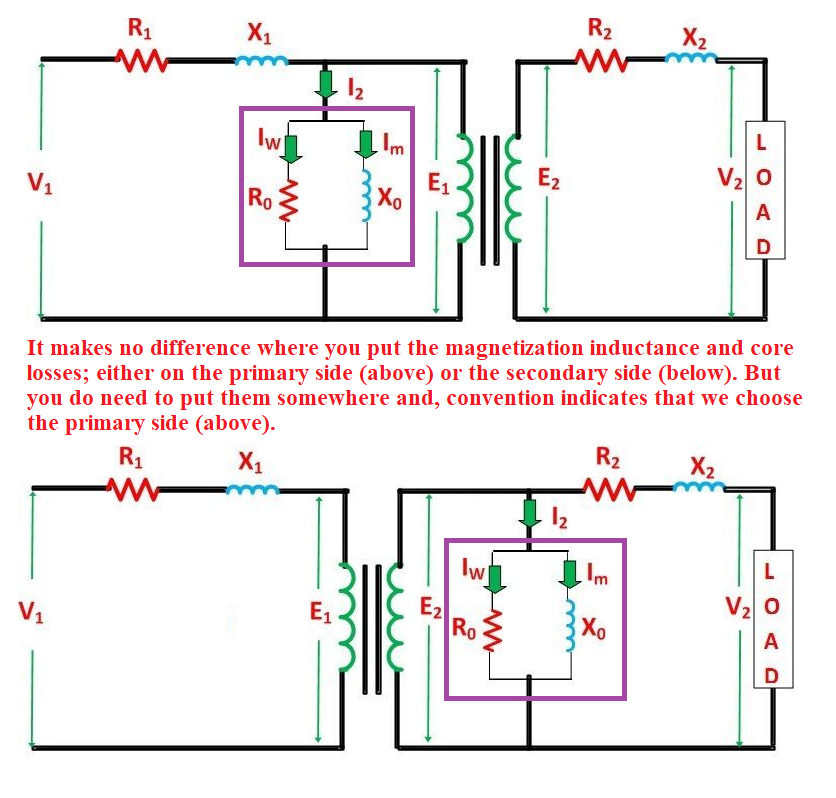 Why the primary side had magnetization reactance and resistance on shunt while the secondary side doesn't have those although both primary and secondary windings have same Flux through them and are physically alike except the number of turns may change?

You can move them to the secondary side if you want but, what would you do if the transformer has two secondaries i.e. what is simplest; keep those components on the common primary side or, share two lots of components between two secondaries?

Right in the middle of the equivalent circuit is an ideal impedance converter here: -

Yes, it's drawn like a transformer and can be regarded as a 100% ideal transformer but, by its very nature you can move components on the left to the right and vice versa AND, if you wanted you can split magnetization inductance and core losses into two circuits that appear either side of the ideal impedance transformer. But, it begs the million dollar question "why make things more complex than they need to be?".

I mean, why would anyone want to do this: -

Which side the magnetizing branch is put on in the classic equivalent transformer model (which you posted in your question) makes no difference as the central element is an ideal transformer. There are already other answers indicating this perfectly. I would like to add the information that, in practice, the condition of the core (ie magnetizing current and losses) is not the same when the transformer is fed by the inner or outer winding, this because of the way in which the magnetization flux adds to the leakage flux.

When the transformer is fed by the outer winding, the core yokes get over excited due to the sum of the magnetizing and leakege flux.

Of course, these phenomena depend on the constructive form of the transformer and even on the load's Power Factor. Unfortunately, the more classic Transformer model simply cannot model such effects. An example of a circuit model that can reproduce these effects can be found here.

There is no sense in dividing Xs into Xs1 and Xs2. The T-models provided above can be used at rated voltage, but at abnormal conditions (for example, during inrush current events) the Pi model is preferrable as explained in many papers, see for instant our COMPEL paper with DOI 10.1108/COMPEL-06-2021-0190: "Once again about the Steinmetz transformer model and the ongoing subdivision of its leakage inductance", S. E. Zirka,Y. I. Moroz, and Cesare Mario Arturi. Best regards, Sergey Zirka