Disclaimer: I am a beginner.

I am reading a knol book on electronics, and I am faced with this schematics:

How do I read a circuit to understand what it does ? Do I have to imagine the electrons flowing, or is there a better strategy ?

Another example I found, this time more complex: 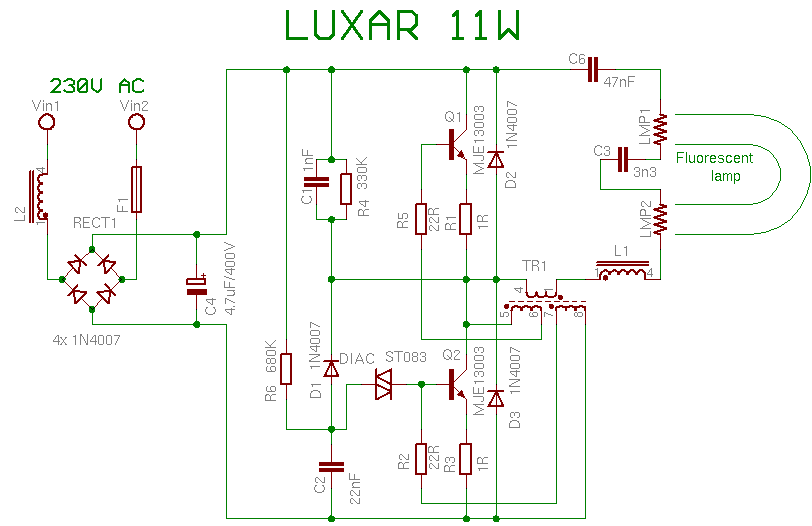 While I do understand the left part, how do I make sense to the remaining mess ?

In electronics engineering there are a lot of common circuits, electronic building blocks. After you learn how the basic components work, the next step is to analyze, measure, and learn these buliding blocks. For example there are several well working solutions for AC-DC conversion, and if know these, you can recognize this kind of circuits.

There is no easy way to do this. In the university the teaching begins with the electrons and low level physical laws. Then come the passive electronic components, then the active ones, after that the basic circuits, etc. Each of them has a characteristic (what output it gives for what input) which you have to learn and memorize. So next time you will be able to imagine what that type of circuit does.

There are manual methods and calculations to analyze the current flows in the circuit, but I think the simplest solution is to measure the circuit in an electronic simulator program. Of course there are a lot of information on the net, for example about the recifier circuit you linked, see here.

The "electrons go from A to B" statement prevalent in many well known electronics books is what confused me most about electronics. That and the fact that they didn't explain properly (or I didn't grasp properly) that every "loop" of a circuit would have the same voltage over it meaning you can isolate individual "loops" and discover what they do.

I found a resource (I think the link was from here somewhere) that really helped clear up the mechanics for me:

This guy takes a unique and clear way to explain the fundementals and covers things that you won't usually see in an equation heavy textbook, such as:

"Charge" is the stuff inside wires, but usually nobody tells us that all metals are always full of movable charge. Always. A hunk of metal is like a tank full of water.

Another thing you'll notice is that many circuits you'll see schematics for will have components that may not be necessary for it to work but are there to stabalise or improve the operation of a circuit. Such an example would be decoupling capacitors.

Other than that, search some of the articles on here and ask some questions - the guys and girls here are friendly and helpful and have so far been a fantastic help to me.

To understand electronics, you first need to understand what the individual components do. There are two parts in that circuit:

The transformer can change the voltage of AC (alternating current) power from what you're supplied with (here 120 V, household current) to something closer to what you require (here 12 V).

The diodes (here in a "full-bridge" configuration) convert the AC to DC (direct current) by only allowing current to flow in one direction.

Excellent question. I like the analogy to reading English text -- no matter how much someone (verbally) explains reading to you, the only way to get good at it is to actually read stuff, with at least some excruciatingly simple stuff. I hear that writing (starting with simple stuff) is also helpful in learning to read.

Once you know what each electrical component does -- transistors, diodes, caps, etc. -- you can eventually work out the results of some connected set of components (or write a simulator that simulates it, like SPICE), much like knowing how each letter sounds, you can eventually sound out words in written text. Alas, just because you can read the words "Eppur Si Muove" or "Jedenfalls bin ich überzeugt, dass der Alte nicht würfelt." with perfect diction does not mean you really understand it.

When designing electronics, recognizing these groupings is even more important. Often some prototype does something that's a little annoying -- say, rapidly drains the batteries, or the particular parts chosen are now unavailable -- and the best way to fix it is to tear out a section (or, more often, completely disconnect, isolate, and bypass that section), and replace it with a functionally equivalent section that is faster, cheaper, lower-power, or better in some other way, although implemented completely differently.

A few people are really good at drawing schematics. In theory, it shouldn't matter where each component is drawn on the schematic, as long as it is connected to the right pins of the other components -- in theory, it shouldn't matter how you spell words on paper, as long as it sounds OK when you sound it out. In practice, there are certain common ways of arranging things (idioms) that help people remember where they've seen this particular group of parts arranged in that way before.

Many schematic diagrams look like a big spaghetti ball of interconnections where you pretty much have to figure out what everything is doing all at once. But extremely rarely is it really a circuit where everything depends on everything else -- most of the time, it's merely poorly drawn. Most people, when trying to figure out such a big mess of seemingly randomly-connected components, get a pencil and a big piece of paper and re-draw sections in their preferred style. Nearly always a schematic can be re-drawn more clearly -- we have input power, we have an oscillator over here, etc. -- and then we can draw a big box around each section and label it "oscillator", "signal amplifier", "power amplifier", etc., and label what the connections between sections mean.

I imagine that the original designer rigged up a quick prototype with an oscillator here, with its output connected to a power amp there. In order to reduce net parts cost, sometimes (even though it makes things more confusing) we overlap sections. For example, using much more expensive transistors in the oscillator than we really need just to oscillate, so that its output can directly drive a heavy load -- the "oscillator" section overlaps the "power amplifier" section.

I'll try to put together the building blocks of your circuit diagram:

As long as you don't fully understand the first schematic I would forget about the second.

The second schematic is complex because of the nasty three windings transformer, and the non-linear diac. Try to understand more simple schematics first, preferably involving just resistors, capacitors and transistors (or MOSFETs). Especially when the transistor is used as a switching element you can go a long way just with Ohm's Law and Kirchhoff's Laws if you know the basic workings of the transistor (i.e. how \$I_C = H_{FE} \cdot I_B\$).

198
What is a decoupling capacitor and how do I know if I need one?
11
What is the use of transformers with 3 pairs of wires?