Capacity of two Batteries in series

I have basic question about connecting two batteries of same type (ie of same voltage and same capacity, say 12V and 100Ah) parallel.

A usual rule of thumb says that if with connect two batteries of same type (Y V, X Ah) in

I prepared some calculations in order do derive the predicted rule of thumb for the series case based on elementary Kirchhoff's circuit laws. while the addition of voltages results as an immediate consequence, I not see how I can conclude from consideration below the prediction that the capacity of the two batteries in series is the same as for single battery.

Setting: to apply Kirchhoff laws we should assume that our battery V has small internal resistence \$ Ri \$. let moreover R the a test / load resistance. For a single battery we have: 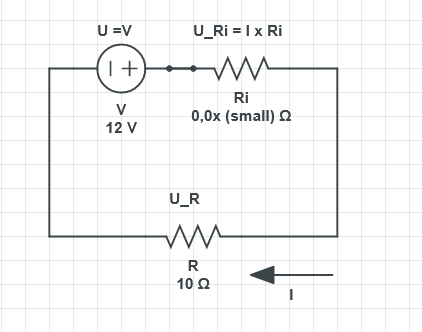 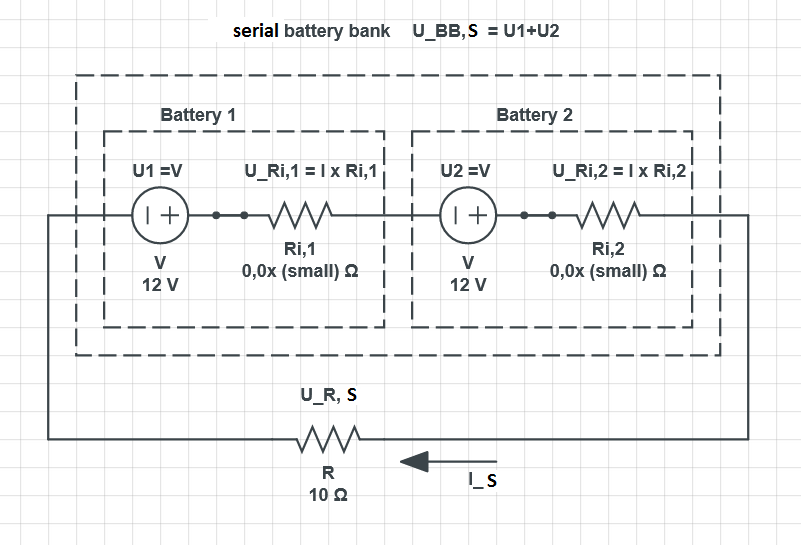 But how can we derive from \$I_S=2I\$ that the capacity of serial bank battery stays the same as for a single battery?

In this example I'm going to assume an ideal world just to make the math easy, real batteries will behave differently.

Suppose you have two 10V batteries, each with a rating with 10Ah. If you connect one battery to a 10 ohm load the current will be 1A (10V / 10 ohms), so theoretically it would last for 10 hours.

If you connect two of them in parallel the voltage will remain the same, so connected to the 10 ohm load the current will still be 1A, but each battery will be providing half of that, or 500mA. 10Ah / 500mA = 20 hours.

In each case each battery will supply it's voltage times it's amp hour rating, 10V * 10Ah = 100Wh. The difference in discharge time will depend on the configuration and load.

Suppose we have two batteries with a capacity of 100 Ah. Then suppose that those batteries are in series, connected to a load. Then, because of Kirchhoff's circuit law, we know that all of the following quantities are equal:

By the same logic, the second battery has been depleted, too.

The voltage and resistance calculations that you've done seem to be correct, but they're not really relevant to the question you're asking.

But how can we derive from \$I_S=2I\$ that the capacity of serial bank battery stays the same as for a single battery?

What you can derive from \$I_S=2I\$ is that two batteries in series will discharge into a given load resistor at a rate twice as fast as one battery alone (using the same load resistor).

Remember current is the rate at which charge flows through a circuit element. By itself, the rate of discharge does not tell you anything about the capacity.

Not the answer you're looking for? Browse other questions tagged circuit-analysis batteries battery-charging or ask your own question.