I've been taking a look at the HP 3312A signal generator schematic to learn how it works. For reference, the service manual that contains the schematic can be found here: https://bama.edebris.com/manuals/hp/3312a/

The generator contains a main triangle wave oscillator which consists of two current sources which sequentially charge and discharge a timing capacitor, creating the positive and negative slopes of the triangle wave. To perform the switching between the current source and sink, the generator uses a diode switch, which consists of 8 diodes in a ring configuration, consisting of CR200, CR203, CR204, CR205, CR207, CR208 (I think that's the number?), CR210, CR207, and CR215. The following is an excerpt from the schematic located on PDF page 60 (Figure 7-2 in section on page 7-5), with the diode switch in question located near the center. The current source is provided by Q106 while the current sink is Q107. The timing capacitor is C205 and the signal to control the switch is provided from a circuit on a different schematic sheet labeled by "From Comparator". 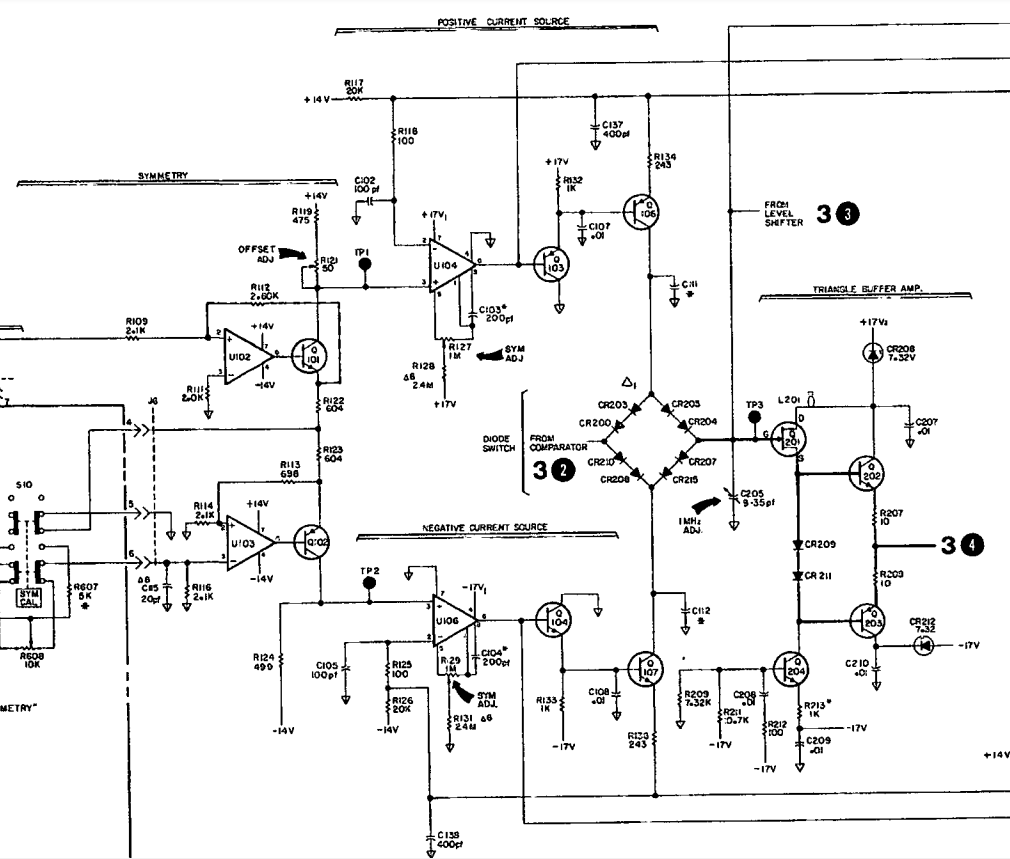 Now I fully understand how the circuit works. What I'm trying to understand is why HP decided to use two diodes in series in each branch of the diode switch. Specifically, in each branch is a Schottky diode in series with a general purpose diode. For example, CR200 is listed as a general purpose diode while CR203 is a Schottky diode.

From my understanding of this circuit, there are a few diode specifications that affect circuit performance. First, the reverse leakage current of the diodes can cause nonlinearity in the ideally linear ramps of the triangle wave. So for that reason, I can understand why a general purpose diode would be desirable. Second, the finite reverse recovery time of the diodes causes an offset whenever the triangle slope changes sign. So for that reason, the typically faster switching speed of Schottky diodes would be desirable. Lastly, the nonlinear shunt diode capacitance (which ties into the reverse recovery time) should be minimized to maximize linearity and speed. So for that reason, I would surmise that putting two diodes in series would be similar to putting two capacitances in series and thus reduce the total effective capacitance (not quite this, since the nonlinear diode resistance is still present).

I would also appreciate if someone could verify that the statements I made are correct regarding the effect of diode specifications on this particular circuit.

The Schottky diode has HP part number 1901-0535, for which I cannot find a commercial equivalent.

Browse other questions tagged circuit-analysis diodes or ask your own question.

3
Schottky Diode substitution
1
How do I figure out which Schottky diode to use?
3
What is the meaning of this statement "If any diode has fully recovered before the V across it starts to swing, there is no reverse recovery current"?
19
Why did they use ultrafast diodes in a 50 or 60 Hz bridge?
0
Diode selection for step-down Converter
0
Series diode in power supplies
2
Help choosing modern replacement for Hitachi 1SS86 Schottky diode
1
Correct schottky diode selection
0
What's The Purpose of One Additional Diode Here
0
How can I calculate reverse leakage current in a Schottky diode in series with a resistor?