A syntax error in my C18 program code

I'm using the MPLAB IDE X v1.41 with C18 compiler to pragram a PIC18F45K20. My objective is to retrieve image data from a completely built image sensor board and display on the computer using the MAX232 and serial to USB cable. The output data of the image sensor is in a digital form. However, there was an error in my program code which stopped me from further testing. Please help me identify the problem.

The error occurs in the putsUSART() line in void main(void)

The program code below was written by myself. Notice that it is only the main body of the program:

You likely will also need the processor-specific #include, since the libraries support multiple flavours of parts and need a hint as to which hardware you're using:

You may have to explicitly define the paths to these headers if your C18 isn't cooperating.

Also, further to what Abdullah said, user functions like your init_USART should have a function prototype in your primary .h file to avoid having to explicitly structure your code in a specific sequence.

UPDATE: The error is in putsUSART.

According to the library documenation, the call to putsUSART does not accept format specifiers like printf() and other standard I/O calls, it only accepts a pointer. 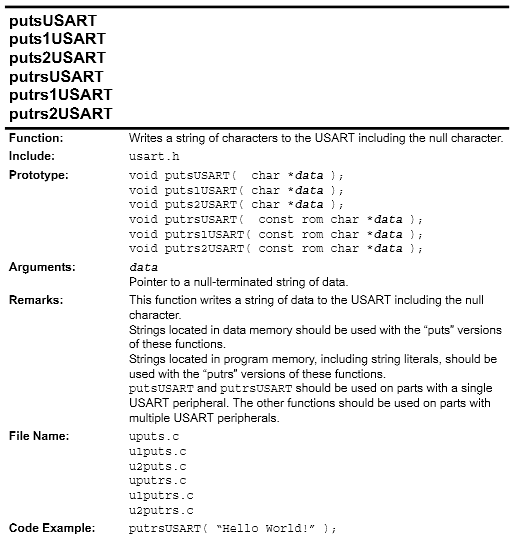 It appears that you need to sprintf() into a string buffer first, then call putsUSART on that buffer.

This is because you have used an undefined function in the main. You have two solutions to this problem, both of them will work;

Also, you should do some inclusions to your C file with #include directive, as Madmanguruman noted.

This is not a function call:

Not the answer you're looking for? Browse other questions tagged microcontroller pic or ask your own question.

4
How set the baud rate for serial communication in ATmega32u4
1
Problem with transmitting data from PIC18F45K20 (C18) to MCP23017
3
PIC warning 364 related to initialization of const
2
Writing data on EEPROM or Flash memory of the PIC18F47J53
2
Allocating more memory Space in controller
2
dsPIC 33EP128MC506 will not read RB8, appears to be software problem
4
First PIC Program using PIC16F877A and its configuration bits for Internal clock?
1
Using Logic Analyzer for SPI
0
Odd character echoed from UART - PIC16F