Can a X2 polypropylene film capacitor be used for dc smoothing at the output of a bridge rectifier? I want to use this capacitor at the input of a power factor correction circuit with a switching frequency of 130 kHz. This is the capacitor I want to use https://datasheet.lcsc.com/lcsc/1806081834_KEMET-PHE840MB6470MB16R17_C183568.pdf
The mains supply is 240Vrms. The capacitor I am asking about is the one labelled C105 and C106 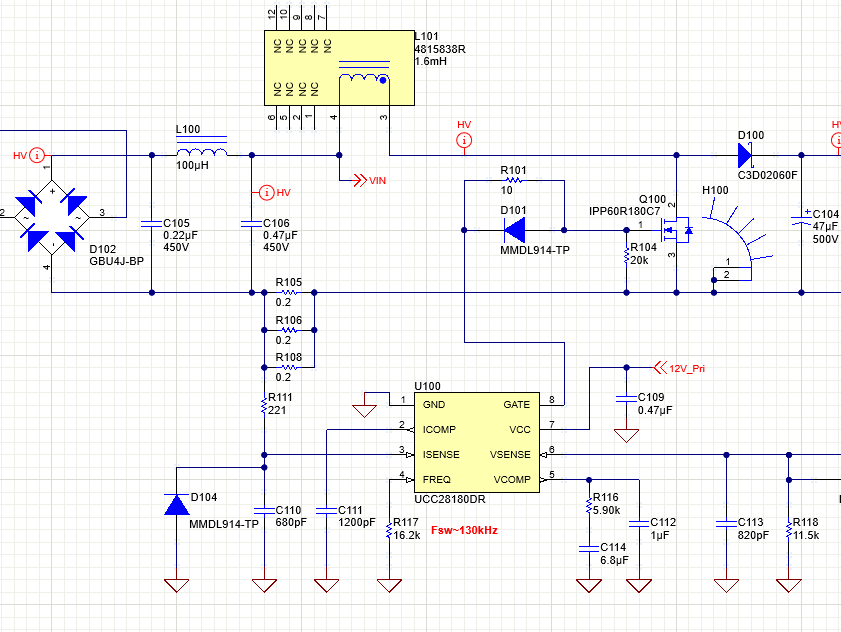 Yes they can and you have the benefit that if they fail they should fail short causing an over-current trip upstream (breaker/fuse/monitor).

You however might not be able to realise the same capacitance per unit volume as such capacitors are designed for high transients and as such have high spacing internally, which reduces the overall capacitance as capacitance is proportional to plate separation.

For a power factor correction circuit to work effectively the input voltage must not be smoothed. As much as possible it should be the same as the input line voltage but rectified as the following circuit requires unipolar voltage.

The purpose of those capacitors and the inductor L100 is to minimize the amount of the switching frequency that is conducted out of the power cord. There are FCC regulations limiting how much is acceptable.

The boost converter will be controlled so that at all times its current input is proportional to the input voltage. This is so that it acts like a resistor rather than taking current in short pulses as would normally occur with a rectifier and shooting capacitor input.

to reduce 100Hz ripple from a rectifier at the low voltage output? No, this will not work. Or at least - it depends on the requested current.

Somewhere in the middle of a smps. Probably yes, but in any case a capacitor alone will make your powerfactor worse, because reactive components affect the powerfactor allways in either way.

Not the answer you're looking for? Browse other questions tagged capacitor switch-mode-power-supply bridge-rectifier emi-filtering power-factor-correction or ask your own question.

3
High current linear PSU capacitor requirements
3
Dimensioning smoothing capacitor for China DIY LED lamp
2
Selecting rectifiers for a welding machine
4
Axial vs Radial Film Capacitor
4
Choice of capacitor for high frequency application
2
How to select high frequency rectifier capacitor?
2
230VAC to 230VDC converter for flicker free LED construction lights for use in videography/photography
1
Capacitor ESR Calculation
2
From where can I get the impedance graph/ frequency response information of a capacitor?