Reading a couple of ohms when touching multimeter probes together

Around 10 months ago, I purchased a cheap-ish (~25$) hardware store multimeter: it's a K2M KDM-600C, 3.5 digits, 2000 counts. While messing around with resistance measurement on the smallest scale (200 ohm, +- 0.8% 5d) I tried touching the probes together and read 0.1 ohms. Since the resolution at that scale is 0.1 ohms and the error for such a small resistance is quite significant, I didn't bother too much.

Time passed, I've used the DMM quite a bit to measure DC voltage, amperage, other resistances aswell, and tried the "experiment" again: this time, touching the probes together got me ~1.1 ohms. Again, I didn't bother too much and thought that maybe was due to finnicky contact between the probes.

Recently, I tried to measure a 10 ohm resistor, 1% tolerance, and the reading was way off at about 25 ohms. I measured all the other 9 resistors and got similar results. When I measured them with another cheap DMM I have (which has similar accuracy), the results were within tolerance considering the error.

All the other scales work fine, I tested them with other 1% resistors I have and got acceptable results, it's just the 200 ohms one that is giving me trouble. Other measurements like voltage, diode mode and such seem to work fine when compared against the other cheap DMM that I have and analog pins on an Arduino board.

Switching probes with other types I have doesn't seem to influence the result. The battery (9V alkaline) is at 8.84 V when I'm measuring on the 200 ohms scale: based on the battery datasheet, it should be at around 30% DOD, so it's definitely not dead. Regardless, I replaced it with a brand new battery of the same type and the issue is still there.

There is no "zeroing" function on the meter, like a button or a knob, and there's no mention for such functionality in the user manual either. I took apart the meter to see what's inside and found a code on the PCB, but unfortunately I didn't find any schematic for it. I took some pictures though: 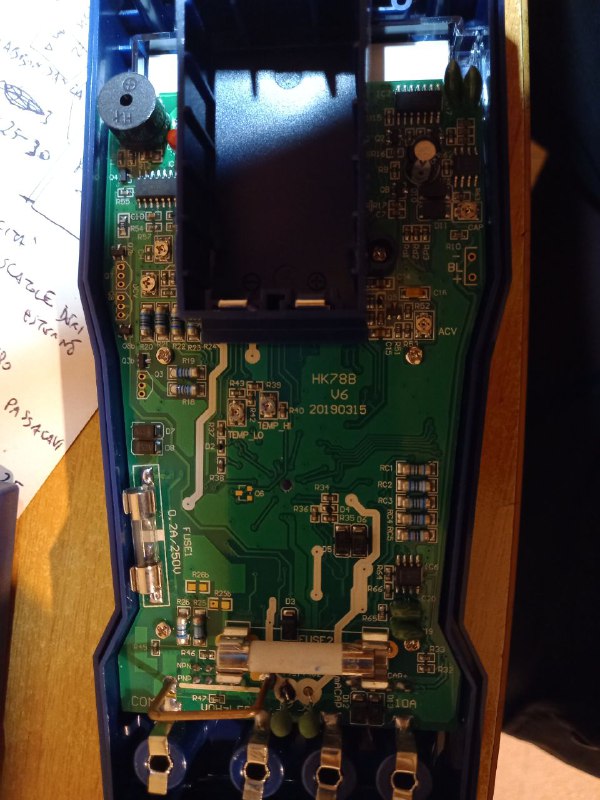 I found something that resembles potentiometers or trimmers, since they seem to have phillips-like holes. However, I shouldn't be messing with them, because they are marked as "TEMP-LO", "TEMP-HI", "CAP", "ACV", "DCV" and "HZ":

I tested the resistance between the probe contact and the soldered joint on the PCB for voltmeter, ohmmeter and such (it's the second one from the left, marked "VOHZLED") and got pretty much 0 ohms, so I don't think there's a problem there: 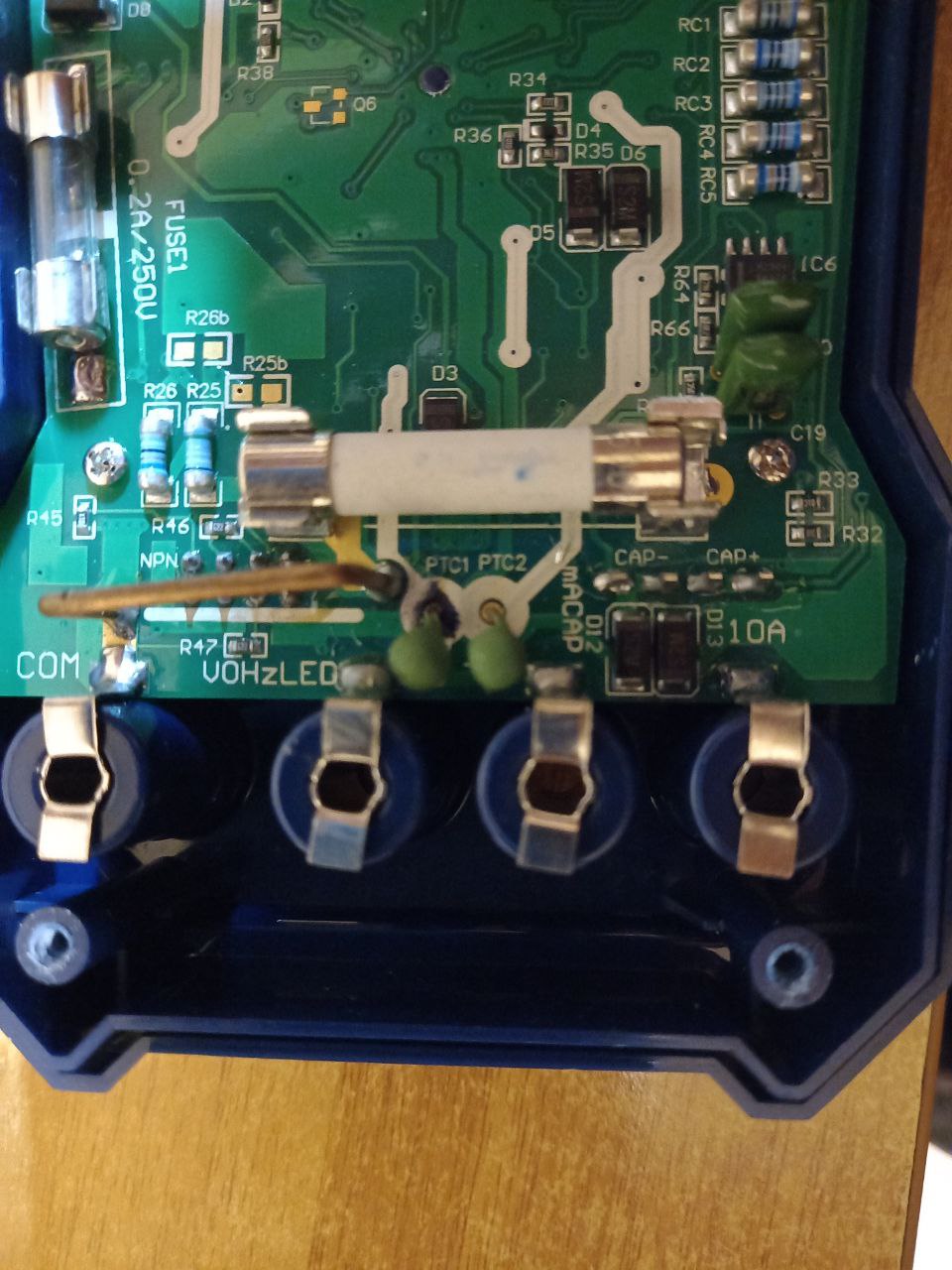 But, while checking that, I noticed something that seems to be a burn mark on one terminal of the component labeled "PTC1", very close to the "VOHzLED" contact. Checking for continuity between one terminal of PTC1 and the "VOHz" contact confirms that the two are connected together (in fact, PTC1 and PTC2 share the same connection with the probe contact). Since I don't know much (I'm learning electronics) at first glance it looked like some kind of ceramic capacitor: searching for "PTC" I found out that it's often related to a resettable fuse. I don't know how to check if it's working or not: a regular fuse (like the big ones that are there for 200mA and 10A) behaves like a short circuit, but this one has some resistance, which as far as I know it should be expected, since it's a variable resistor.

So, to recap, I'm reading a couple of ohms while touching together the DMM probes, and the value seem to get higher as time passes. Is this a common behaviour, due to the cheapness of the DMM, or I somehow damaged it?

EDIT: Instead of answering comments scattered all around, I think it's better to consolidate what other users are suggesting: @TeaToo rubbing probes together doesn't change anything. However, when I press the rotary switch a little bit while shorting the leads (like @glen_geek suggests), the value jumps all over the place and now it settled on ~2 ohms: I'll try to clean the contacts and see if it improves or not.

And yes, I know that "the one who buys cheap buys several times", but I just started and didn't want to spend +100$ on a DMM. I guess I've learned the lesson though.

UPDATE: I finally managed to get myself some 99.99% Isopropyl Alcohol (at least that's the concentration on the label), and based on the suggestions given by @Rodo and @glen_geek, I completely took apart the meter.

There were no traces of oxidation on the contacts, however after damping a piece of cotton with IPA and thorougly cleaning them (both the contacts on the PCB and on the knob), the cotton became filthy grey (yuck). After the IPA was completely dry I reassembled the unit, and the results were pretty good.

Shorting the leads together on the 200 ohms scale now reads 0.7-0.8, consistently even after wiggling the knob a bit. Measuring a 10 ohms 1% resistor got me 10.7 ohms, which considering the baseline reading and the error of the meter on that scale seems acceptable.

Furthermore, shorting the leads while in continuity/diode mode before gave me 0005, and now it gives me dead 0 consistently.

So, I think it's a success. Thanks everybody for the suggestions!

All 2-wire ohmmeters will have an offset from the uncalibrated resistance of the test leads. Some can 'null out' this by shorting the leads (as you do), and then subtracting this residual reading from subsequent readings that are displayed.

Lacking this function, you have to manually do it when measuring low-values resistors.

Your low-cost meter may have quite variable contact resistance for the lead sockets; perhaps your leads are worn (fraying internally) and have a higher resistance ?

Not the answer you're looking for? Browse other questions tagged resistance multimeter or ask your own question.

5
is it possible to repair a DMM which was burned by putting the leads into 230V on a frequency-measuring setting?
4
Why do measurements displayed in multimeter inconsistently vary by factors of 1000 depending on range?
4
Measuring Current Consumption of USB Devices
1
Testing Capacitors - Differing Results Each Time One Is Tested?
33
Multimeter exploded during ACV measurment - What did I do wrong?
0
How to read a multimeter (digital) -- should I get 2A readings from a couple of AA batteries?
0
Resistance reading on digital multimeter
1
Multimeter giving seemingly inconsistent voltage readings
0
Measure current through a screw terminal