My question is in practice how to people deal with this? Do people use some indirect measures such as position of the wiper/sliding contact to indirectly estimate the resistance of the variable resistor, or do people use the bridge with three known resistors without balancing the bridge?

There are two ways to use a Wheatstone Bridge, balanced and not balanced.

In the not balanced mode, the bridge is used to reduce the common mode signal from a resistance measurement. As long as the output voltage is reasonably small, so the bridge is somewhere near to balance, it can be measured, and used to compute back with the known values of resistors. This is the method to use when the fractional change in resistance is very small. Look at some application notes for using HX711 with strain gauges for instance.

The Wheatstone Bridge was originally developed for balanced operation. Here one option for the known resistor would be a switched resistance box. Another popular configuration would be to use a known and the unknown resistor as one leg, and a potentiometer for the other leg.

Great care went into building a linear potentiometer whose resistance ratio could be read accurately. One option that's often seen in illustrations of early electrical laboratories was a long thin resistance wire stretched out on a long board alongside a ruler.

Another option is to build a high quality rotary potentiometer. This is an old lab instrument that claims 0.1% accuracy. The potentiometer is behind the big round dial, and accounts for a significant fraction of the overall cost of the instrument.

The most practical is to use 3 known resistors to measure the 4th. In circuit design low tolerance parts rise in cost by orders of magnitude, yet matched values or ratios are much easier to make.

So you can easily create a V/2 with a resistor network of matched values then choose an unknown with the known value that has better accuracy than you need. The accuracy increases if all values are close the the same.

In general, matching impedances from input with negative feedback amplifiers is somewhat like a Wheatstone bridge. Consider a source like a photo diode, PD sensor say having some RC impedance being one-half of the bridge and the non-inverting input is the other half of the bridge at some reference voltage. This is to achieve gain with a flatter response with (RC)source = (RC)fb for negative feedback. and gain = -Rfb/Rs It is usually called a Trans-Impedance Amplifier or TIA.

There are many other bridge types as well for measuring high current contact resistance (Kelvin) or leakage conductance or RLC impedances etc.

There is more to be said about NIST traceability, but I'll leave it it at this.

In reality, the Wheatstone bridge can be only really useful, if you have three known resistors, one of which R3 must be comparable to your unknown resistor R4 and the other two RM1 & RM2 should be closely matched. 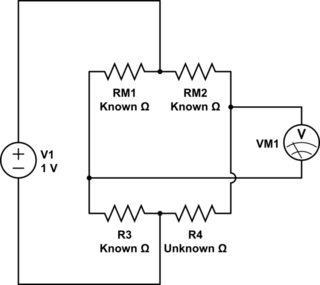 That allows you reduce the differential input voltage by orders of magnitude while the signal magnitude due to changes in R4 remains the same, thus "amplifying" your relative resistance change by the matching ratio of the bridge.

However, as Tony explained a Wheatstone bridge is tricky. You need 3 known resistors, which means they must be low drift which is expensive. Moreover, they also must have a low noise index, because they each add uncorrelated noise to your measurement.

So let me actually highlight the limited usefulness of the Wheatstone bridge in the 21st century. A more modern approach is the following: 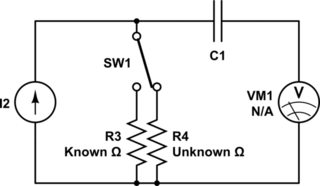 It only requires R3 to be really precise. The noise of the current source is completely irrelevant due to the ratiometric nature of measurement. The impedance of the current source is also not critical, so you can realize it by a voltage source in series with a resistor. You obtain the same precision as with the Wheatstone bridge by using a single low noise and low drift resistor. C1 is there to remove the DC bias point and its value is not so critical. You also only need a single ended measurement (lower noise again). In the end, the input signal magnitude will be the same as that of the Wheatstone bridge (modulated by the switching frequency), but you obtain lower noise, lower drift, lower cost.

A new look at the old bridge

Can we now, in the 21st century, look at this famous 19th century device from a different perspective? Let's try... we won't lose anything from this... we will only gain…

There were no precise sources then (neither voltage nor current)... nor precise voltmeters. So they had to find a way to compensate for the errors (mainly because of the varying supply voltage).

For this purpose, they used the principle of negative feedback but implemented manually. So, the so-called "balanced bridge" and the man moving the rheostat's wiper or switching the resistors inside the box is a "negative feedback system". Its main purpose is to convert an unknown resistance Rx into another known (readable, measurable) resistance Rvar. It make it by keeping equal the ratios of two voltage dividers.

From this point of view, the balanced bridge can be considered as a "resistance-to-resistance converter". Depending on the ratio determined by the rest two resistors, there are three possible cases:

The "output resistance" Rvar could be converted to length (by the so-called "rheochord") or could be presented as a sum of discrete resistors (in a box).

How we measure resistance today

Today, practically we do not use a bridge to measure resistance because we have precise current sources and digital voltmeters (both implemented by the negative feedback principle).

So we simply pass a reference current Iref through the unknown resistance Rx and measure the voltage Vout across the resistance; then we calculate Rx = Vout/Iref, according to Ohm's law. This is how modern ohmmeters are made.