I have an ESP8266 with two buttons connected to pulled-up GPIO4 and GPIO14. The buttons pull the signal down if pressed. I want to reset the microcontroller on every raising edge. I thought about adding two diodes, so that the readings of one button don't get messed up by another button. The buttons are pulled up by internal resistors in the code. But my circuit doesn't seem to do what I wanted: 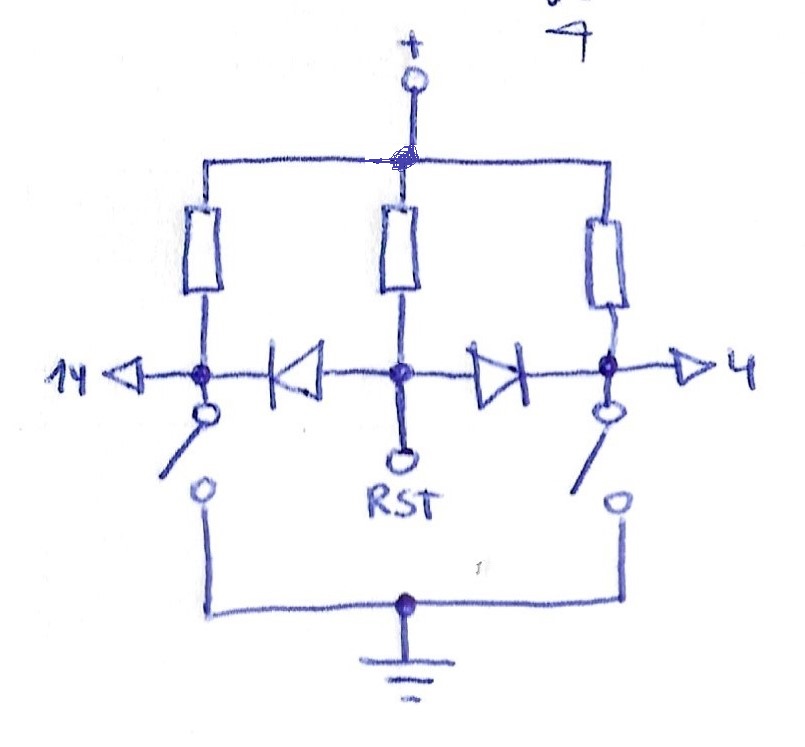 What it should do: The two buttons are in a case. When one of them is pressed, the ESP wakes up from deep sleep. It then reads the values on GPIOs and sends them via WiFi. After that it listens for a falling edge (via interrupt) on those two GPIOs and restarts in software and then goes to sleep if the buttons are pressed down. So it's in deep sleep with a low signal on RST, if I release the button RST goes high and the ESP wakes up.

Probably what’s happening is that when the button is released, by the time RESET completes and the code starts the GPIO state is gone. You’ll need to hold the GPIO state long enough so your program can read it. Perhaps add some R-C delay?

Not the answer you're looking for? Browse other questions tagged microcontroller diodes esp8266 input button or ask your own question.

5
Problem powering ESP8266 with two 1.5V AA cells
2
I need a switch that not only detects open/close, but also sends a pulse to wake up an ESP8266 whenever the (debounced) state changes
4
ESP8266: Differentiate wakeup due to sleep interval vs button press
3
How to connect GPIO16 and RST of ESP8266?
1
Multiple buttons connected to reset pin
3
Convert 2s pulse into short pulse to wake up ESP8266
6
How can I keep a momentary button low long enough for microcontroller to read it?
1
ESP8266 (esp-07) powered by battery(s) for at least 1 year
0
One single button to wake up a WeMos D1 and put it to sleep