TMC2209 why are separate motor and logic voltages needed?

I am looking to use a TM2209 stepper motor driver.

Below is a schematic of how I intend to power it. I'll also be using a MCU, currently an Arduino but might switch to a 3.3V Teensy, connected to the controls pins shown. I've only included the relevant pins.

From this extract from the watterot website it seems to me like VIO is not actually needed. I'm sure I'm missing something.

On power-down the logic supply voltage VIO should turned off at first and then the motor supply voltage VM, because the internal logic of the TMCxxxx driver is powered from VM. " https://learn.watterott.com/silentstepstick/faq/

Why would I need VIO at 5V or 3.3V if the internal logic is powered from VM? Can I run the driver with only 24V at VM?

If I wanted to power the MCU off the same 5V or 3.3V output of the voltage regulator (U3,) how would I protect the MCU from back EMF or if the motor is back driven?

Would it be better to have a separate voltage regulator coming of the 24V supply exclusive to the MCU? 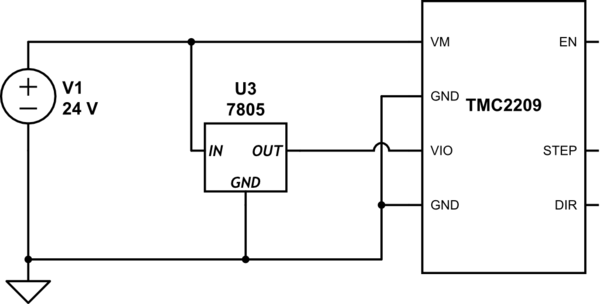 Looking at the TMC2100 IC's datasheet, VIO powers the IO drivers, at the very least. There is an internal regulator to regulate Vm down to 5V for use in the internal logic, but I guess they did not know whether you would be using it with a 3.3V or 5V MCU.

This is still odd however since they could have just derived the entire supply for the logic from the VIO pin whether you were applying 3.3V or 5V.

Producing 10V to 15V from 3.3V takes a lot more stages than from 5V. To make a 10-15V charge pump that supports both 3.3V and 5V from VIO would require extra stages with some pain in the ass modulation or regulation, or disabling of the extra stages when 5V was at the input. Avoid all this means the charge pump cannot be powered off 3.3V. So my guess is that the 5V internal regulator is really there for the charge pump. If it powers anything else on the IC, that is secondary.

I wouldn't be surprised if the VIO line powered a lot more of the internal logic than just the IO drivers. 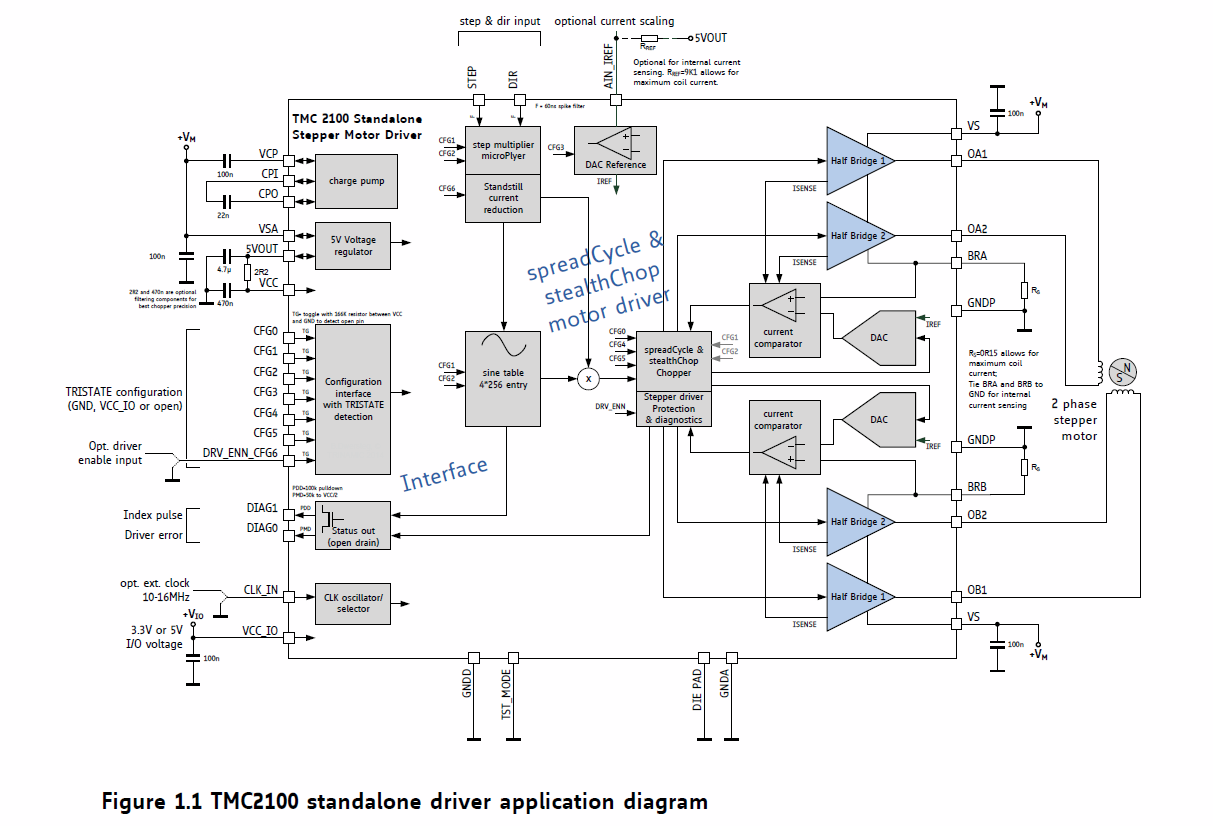 If I wanted to power the MCU off the same 5V or 3.3V output of the voltage regulator (U3,) how would I protect the MCU from back EMF or if the motor is back driven?

Separate regulators will not protect from flyback unless the regulators are isolated. And flyback can punch it's way through IO lines anyways. So you either isolate both supplies and IO lines or you snub at the source.

Not the answer you're looking for? Browse other questions tagged motor-controller isolation logic-level or ask your own question.

0
Multiple SPI devices with different logic levels
1
Isolating digital I/O on an Atmega328
1
LCD SPI interface logic levels and SPI pinout
0
TB6612FNG DC Motor Driver Low Current Problem
4
Do high and low side labels on bidirectional logic level converters matter?
0
Is it possible to use a MAX232 to convert 0 to 5V PWM to 0 to 12V PWM to input to a motor driver requiring 0 to 12V PWM logic?