I'm designing a light source that will employ a grid of LED emitters powered by constant current drivers. The LEDs will be laid out in a parallel/series combination, in rows of 8 emitters in series, with 3 rows in parallel. There will be 3 of these arrays on the board, for a total of 9 rows of LEDs, driven by 3 constant current drivers. This is the schematic for the board: 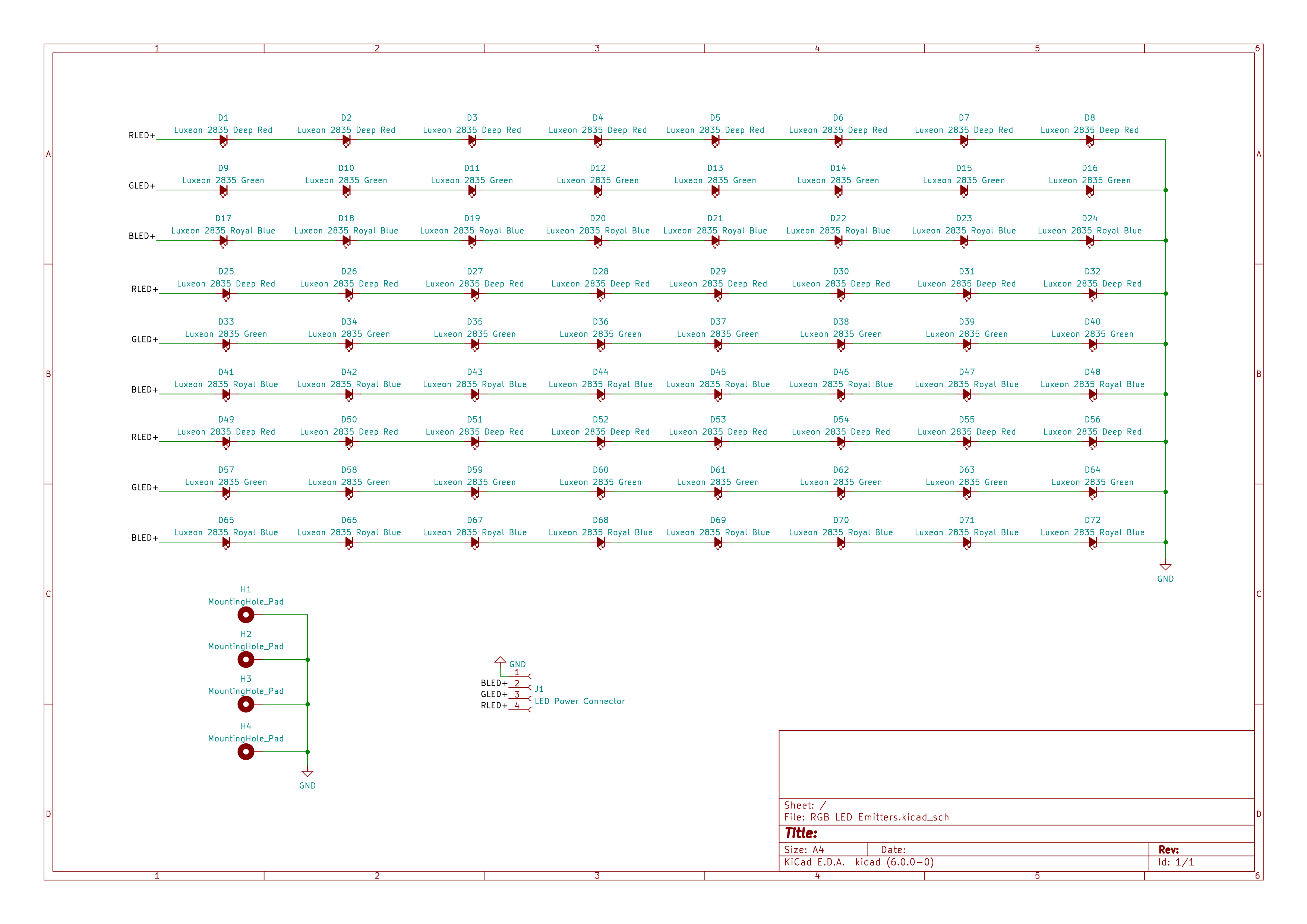 In my initial testing, using 8 LEDs in series seems to limit the impact of voltage variation in any individual emitter, and I will be using an aluminum PCB substrate which will double as a heat sink to distribute the heat, but I'm considering also adding a resistor in series because I've heard that helps to ensure that the current stays the same between the parallel strings. From what I understand, I would add a few hundred mV of voltage drop to each string, so if the constant current driver is outputting 120mA, and voltage drop across the 8 LEDs is 18V, I would add a resistor that would result in 18.3V.

What I don't understand, and I'm hoping someone can explain, is how adding this resistor helps to regulate the maximum current in the string.

The dropping resistor counteracts some of the LED forward drop (Vf) variation by inserting its own forward drop and providing a form of negative feedback. You select the overall LED current by setting the IR drop in the resistor to achieve the target series current. Reductions in Vf will lead to increased current, but also increased IR drop. That's the negative feedback.

How effective the dropping resistor is at absorbing the LED forward variation depends on the ratio of LED Vf variance to the resistor’s IR drop. For example, if your string can have a total Vf variance of up to 1V, but then you have only 0.3V resistor drop, then the resistor isn’t going to do much: you will have very large Vf-caused variations in current

As a consequence I think you will find it challenging to achieve good brightness balance by just using dropping resistors even with a constant-current driver for each color-set, unless you use ‘binned’ (matched) LEDs in each string. Even then, their drop will vary with temperature.

You’ve stated that you’re using constant current drivers. The driver inserts its own variable resistance to achieve a fixed LED current in spite of Vf variation. Therefore, if you extend that idea to each string, you don’t need dropping resistors at all.

If you haven’t designed the current source yet, a 2-transistor current limiter circuit, one for each color string, would work well.

The ones shown are current sinks for low side, which are easier to control - you could use that if you supply Vcc to the LED common anodes instead of ground. Otherwise, they can also be used on the high side with some modifications.

What I don't understand, and I'm hoping someone can explain, is how adding this resistor helps to regulate the maximum current in the string

It doesn't regulate the maximum current in the string.

It improves the voltage balance between the strings.

Personally, I would have thought that 300 mV was hardly worth having, and would have gone for several volts of extra resistive drop.

As I understand it, there are three groups of LEDs, and each group has three series strings in direct parallel. If so, that is a problem and you need the added resistors to fix it.

There is enough variation in Vf from one LED to another that the cumulative voltage range for a string of 8 diodes can vary 1 volt or more. So if, at 20 mA, one string has a cumulative Vf of 22 V and the others have 23 V, then one string will starve almost all available current away from the other. In practice it isn't quite that bad because and LED has a conduction knee just like any other forward-biased diode. But a difference in brightness certainly can be discernible.

The solution is a ballast resistor in series with each string (total of 9 resistors). High-power audio amplifiers have multiple output transistors in parallel, and use small value resistors in series with the emitters for the same reason. The larger the voltage drop across the resistor, the smaller the variation in LED current among the strings. If your 120 mA means 40 mA per string, then a 25 ohm resistor would take 1 V off of your current source compliance, while dissipating only 40 mW.

Not the answer you're looking for? Browse other questions tagged led led-driver constant-current or ask your own question.