Can someone please explain the antenna and gang capacitor of this AM superheterodyne receiver?

This is about an Elenco AM/FM superheterodyne radio receiver. I have noticed a similar post (Can somebody please explain the antenna and mixer stage of this AM superheterodyne receiver?), but still have some questions and hope if someone can help me understand some part of it. 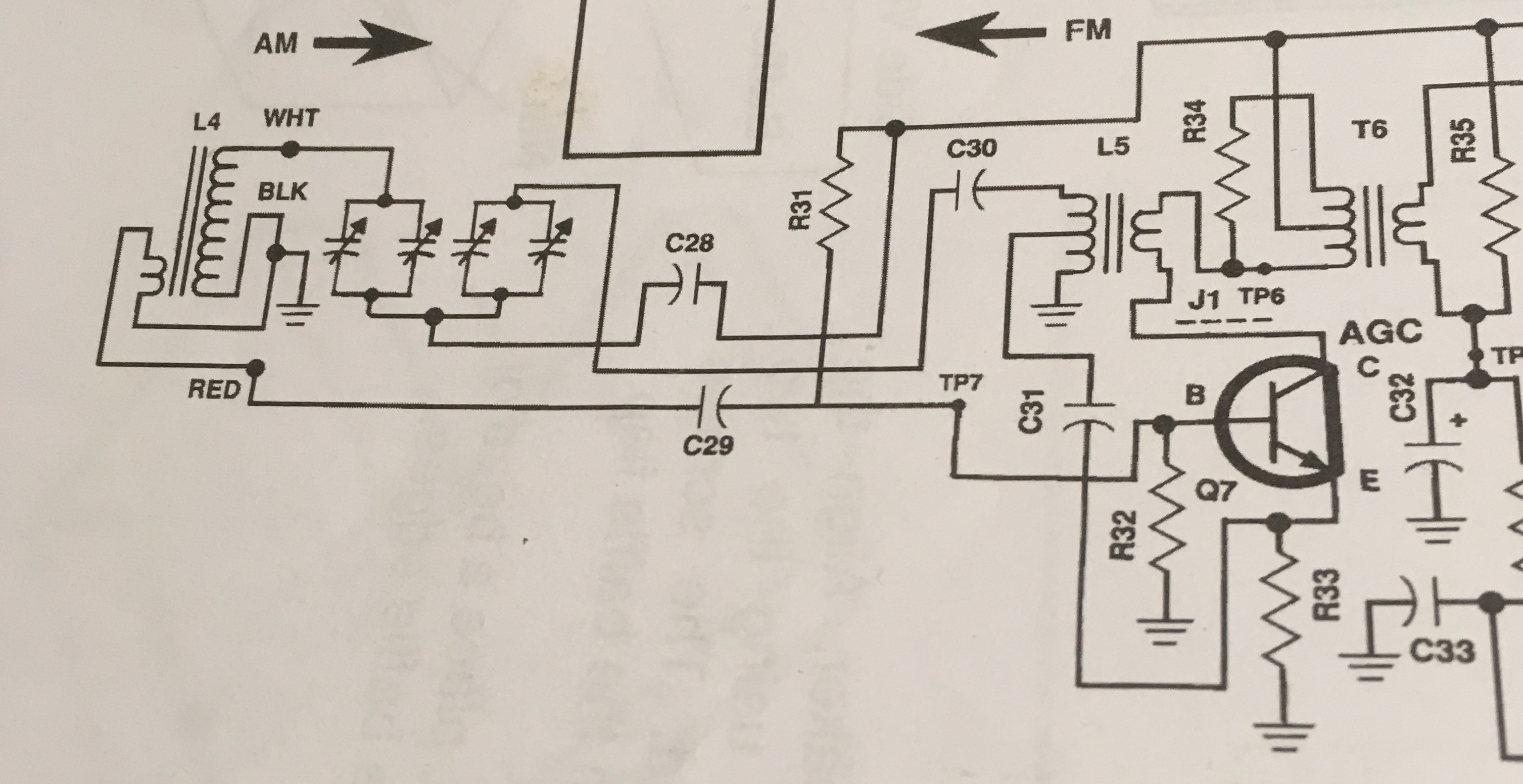 (image from the same link.)

The right side of L4 is connected to the left square of the gang capacitor. This is the antenna.

The left side of L4 is the secondary coil of the antenna.

The right square of the gang capacitor tunes local oscillation. And the signal is sent to the emitter of Q7, which is an mixer.

This "little" circuit is deceptively complicated in its interactions. Inevitably there are repetitions in the explanations I offer here.

The right side of L4 is connected to the left square of the gang capacitor. This is the antenna.

Strictly speaking, the ferrite rod inside L4 is the antenna. If you think of L4 as a transformer then the primary "coil" is entirely notional, "inside" the ferrite rod (I'm stretching the analogy to breaking point here). The flux changes in the ferrite are induced by the external RF. Both the L4 coils on the schematic are secondaries.

The left side of L4 is the secondary coil of the antenna.

Both coils of L4 are secondaries, as above.

Vcc is the power supply which is low impedance (including RF) to ground. @autistic put this more succinctly. C28 is also low impedance to RF. Thus L4 (right) and "square of the gang capacitor" (left) form a parallel tuned circuit. Station tuning is done here and the tuned RF is fed to Q7 base from the low impedance L4 left coil. (Low impedance compared to the L4 right coil).

Q7 has dual function: LO and Mixer (in the era of this fragment of schematic, transistors were expensive. Often times they were given dual functions in order to get more "bang for buck", as the saying goes). The LO parallel tuned circuit (a "tank") is made from "square of the gang capacitor" (right) via C30 to L5 primary (left) in a similar way to the main tuning. The tank oscillation is maintained by Q7 collector AC. Q7 collector and emitter voltages are antiphase, but their currents are in phase. A low impedance tap on L5 primary provides positive current feedback to Q7 emitter.

C28 will have a value that is too large to affect the MW tuning. However, it must be good quality (low parasitics) to remain low impedance at RF.

C29 blocks the DC base bias of Q7 from being shorted to ground through L4 left, but passes RF (value and quality as C28).

C31 blocks the DC emitter bias of Q7 from being shorted to ground through L5 primary (left), but passes RF (value and quality as C28).

T6 primary (left coil) is tuned to IF (Intermediate Frequency) typically 470kHz. The tuning capacitor is not shown explicity but is integral to the transformer construction. The missing capacitor and the flat right-hand side of Q7 are drawing artefacts, to save space on the schematic.

0
Can somebody please explain the antenna and mixer stage of this AM superheterodyne receiver?