Why does circuit go through two sets of contacts on circuit breaker?

I found this schematic one day. Can anyone explain why L1 comes to the same circuit breaker again from contact 2 to contact 3? A 380/220 V transformer is connected to contacts No. 4 and No. 6 as a consumer of electrical energy. 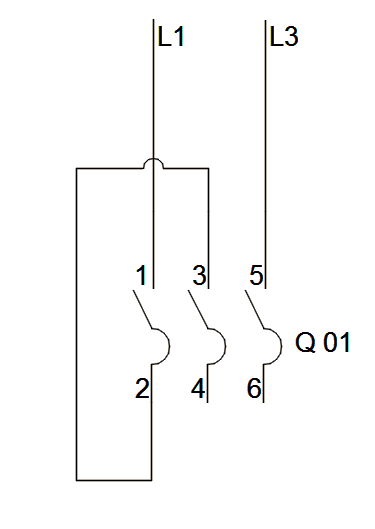 Some 3 phases breakers and overload relays don´t work properly if one phase is not connected (unbalanced current), so this is a usual way to be sure that current is balanced and the device will trip at setup value. Also used in DC current to reduce arcing. Depends on size, some 2 phase breakers are difficult to find or are more expensive than same current in 3 phase type.

There is a type of circuit breaker known as a 'double break'. It has a rotary contact that disconnects the circuit at two points simultaneously. This is to help reduce contact arcing and give greater isolation than a single set of contacts.

What they might have been trying to do here is get the same sort of functionality by using two sets of breaker contacts in series. They might have thought that as long as there was a third set of contacts, they may as well use it. The other leg of the circuit still goes through only one set of contacts, but they probably thought that doubling up on one was better than nothing.